Member of the Admins (formerly)

Prisoner of the Sunshine Institute (formerly)

Trying to escape the Institute.

Kill Romeo as revenge for his misdeeds (determinately failed).

Ages ago, Xara, Romeo and Fred, were all humans who possessed amazing powers, a very rare trait, calling themselves "the Admins". They created the first world together. They were once close, living in a cabin together. They eventually separated and built their own homes. However, Romeo turned on his friends Xara and Fred, resulting in a battle for the control of the world. This resulted in Fred being killed, and Xara being imprisoned. Romeo ultimately grabbed all the power for himself, and used it for his own sadistic entertainment.

Xara is shown to be rude, selfish, and dangerous. Yet, she still shows some respect for Jesse who helped her to escape.

Presumably, Xara was once close with the other admins: Fred and Romeo. After they left the Cabin and founded their own homes, Xara created a portal network so they could still visit each other, although she claims that Romeo took credit for it. She holds Fred in high esteem, believing him to be the best of the three. Xara was friends with Romeo once, but after Romeo betrayed her and Fred, Xara seemingly held nothing but spite for her former friend, wanting to kill him.

Xara’s desire for revenge, coupled with the trauma of being imprisoned for years without sleep, as well as seeing Romeo slowly murder Fred, has made Xara very cold and ruthless, wanting to escape the Sunshine Institute and avenge Fred, with no regard for the lives of others. This is first demonstrated when Xara unhesitatingly forces Jesse to leave behind one of her/his companions in her cell to prevent it from exploding. When threatened by the Warden, Xara shot him with her bow, killing him, with a casual snicker, much to the horror of Jesse’s Gang. 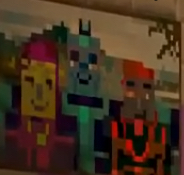 A portrait of the 3 Admins, Romeo, Xara, and Fred.