Member of the Akuma Clan (formerly)

Spending time with Jun Nagisa and Ippei and Mitsuhiko Shima.

He was voiced by the late Makio Inoue.

Xavitan was originally a half-demon born to a human mother and a demon father. He did not have many memories of his human mother, as he thought she died when he was young, but still loved her deeply.

When the Akuma Clan began their invasion of the Earth and began kidnapping humans to be used as energy for the Akuma Clan, Xavitan traveled to Earth to defend humanity from their attacks. He soon meets up with Jun Nagisa and her friend Ippei Shima after saving the former from an attack by the Akuma Clan. While initially frightened by his appearance, Jun soon warmed to him and took him in.

Soon after, Evil and Gabra arrived on Earth, having been sent to bring Xavitan to face tribunal for his treason against the Akuma Clan. Xavitan fought Gabra and defeated him, but spared his life and allowed him to recuperate by drinking water. However, while Xavitan was dealing with the pair, Jun and Ippei were abducted by the Akuma Clan.

Xavitan thus allowed Evil to capture him in order to bring him to the Downworld where the Akuma Clan resided so he could rescue them and all the humans the Akuma Clan had captured. During the ensuing fight between Xavitan and the forces of the Akuma Clan, Evil was crushed by a falling boulder but saved by Xavitan.

Out of gratitude, Evil agreed to serve Xavitan along with Gabra, who was also thankful to Xavitan for sparing his life. Together, the three fought off the Akuma Clan and rescued all the humans before returning to the surface world. 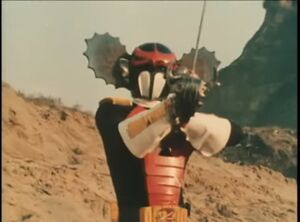