Formerly Warlord and Destroyer of Nations

Swimming.
Helping others.
Spending time with her family and friends.
Fighting enemies.
Training.

Atone for all the evil she has done and to protect the world from evil whether it be caused by gods or mortals.

Xena of Amphipolis, also known as the Warrior Princess and Destroyer of Nations, is a fictional character and the main protagonist from Robert Tapert's Xena: Warrior Princess franchise. She first appeared in the 1995–1999 television series Hercules: The Legendary Journeys, before going on to appear in Xena: Warrior Princess TV show and subsequent comic book of the same name. The character has also appeared in the spin-off animated movieThe Battle for Mount Olympus, as well as numerous non-canon expanded universe material, such as booksand video games. Xena was played by New Zealand actress Lucy Lawless, although the original choice was the British actress Vanessa Angel. She commonly wore a tight brown, skirted, leather outfit.

Xena is the protagonist of the story, and the series depicts her quest to seek redemption for her past sins as a ruthless warlord by using her formidable fighting skills to help people. Xena was raised as the daughter of Cyrene and Atrius, though the episode The Furies raised the possibility that Ares, might be Xena's biological father. In Hercules, during her two first episodes, Xena was an outlaw, but in the third (and last), she joins Hercules to defeat Darphus, who had taken her army. Aware that the character of Xena had been very successful among the public, the producers of the series decided to create a spin-off series based on her adventures.

The character Gabrielle, introduced in the first episode, becomes Xena's greatest ally; her initial naïveté helps to balance Xena and assists her in recognizing and pursuing the "greater good".

Xena originally appears as an outlaw in the Hercules episode "The Warrior Princess"; about ten years into her career of pillaging and marauding, Xena meets Hercules. Initially, she sets out to kill him. In "The Gauntlet", her army turns against her, believing Xena has become weak after she stops her lieutenant Darphus from killing a child in a sacked village. She runs a gauntlet, and survives, becoming the only person ever to survive the gauntlet. She then fights Hercules, in the hope that she will regain her army if she can bring back his head. Xena seems to be getting the upper hand until Hercules' cousin intervenes, making no real difference himself but inadvertently giving Hercules his sword, allowing him to fight Xena on equal ground and defeat her. However, Hercules refuses to kill Xena, telling her, "Killing isn't the only way of proving you're a warrior." Touched and inspired by Hercules' integrity, and by the fact that he too suffered the loss of blood kin as she did and yet chooses to fight in honor of them, she decides to join him and defeat her old army. In "Unchained Heart", Hercules tells Xena that there is goodness in her heart, and the two of them share a brief romantic relationship, before Xena decides to leave and start making amends for her past.

On her self-titled show

During the series pilot, "Sins of the Past", Xena found that the way of redemption was more painful than she had imagined. Her past mistakes plagued her, and she was about to give up her life as a warrior. When she took off her armor and weapons and buried them in the mud, she saw a group of villagers and girls being attacked by a group of soldiers. The group is Gabrielle. Xena saved young women, while Gabrielle was awed by the power of the warrior princess. Gabrielle persuaded Xena to make her her travel companion, and over time, Gabrielle became Xena's closest friend. Xena also reconciled with her mothers Cyrene. Xena and Gabrielle. Shortly after her journey with Gabrielle began, Xena met Ares, who had apparently known her since her warlord era and tried to seduce her to join him as his warrior queen, and she worked hard again and again. She also met a powerful warrior woman named Callisto, whose family was killed by Xena many years ago.

Xena’s follow-up life was devastated by many tragedies. Her son, Solan, never knew her as his mother. With the help of Callisto, by Hope, Gabrielle's demonic child wanted to kill, and she lost Gabrielle more than once. Marcus, a warrior, a close friend and her lord of the warlord era, persuaded her to follow her to choose good things and be killed when doing his first good deed. Later on, he was allowed to return to the world of life briefly to help stop a vicious killer who escaped from the underworld. He and Xena spent a night before Marcus had to go back to the other side. She has no time to save her tutor and friend mom to be tortured to death by her son, the emperor tomorrow. In the end, she and Gabrielle were nailed by the Romans to Idis in March, just like the previous Caesar. Allies, betrayed and killed by Brutus. They were later resurrected by a mystic who named Eli with the spirit of Callisto, who became an angel after being killed by Xena.

In season 5, Eve was the child of the miracle of her resurrection (again through the redemption of Callisto's efforts), the prophecy will bring the dawn of the Olympic gods and the birth of Christianity; in order to escape the persecution of the gods, Xena and Gabrielle Pretending their death, but when Ares buried them in an ice cave where they slept for 25 years, their plans went wrong. During that time, Eve was adopted by the Roman nobleman Octavius ​​and grew up to become the ruthless persecutor of the Roman champion Livia and the followers of Eli. After the reunification, Xena was able to turn Livia into confession, and Livia retrieved Eve's name and became Eli's messenger. After Eve cleans through baptism, Xena has the right to kill the gods as long as the daughter is alive.

In the final confrontation, when God killed most of the gods to save her daughter with the help of God and Archangel Michael, the Twilight City became the past, and when Ares gave up on him The immortality to heal serious injuries and death, she also saved Eve and Gabrielle herself, and Xena later helped him to restore his divinity. When she sacrificed herself to kill Japanese demon Yodoshi, Xena's pursuit of redemption ended and she decided to stay, so the soul of the 40,000 she killed many years ago could be released to peace. However, not long after, Gabrielle saw her spirit on the boat. According to the darsham, Naima, this is just one of the many lives that Xena lives in every era. In the lives of many people, she will go on a path with her soul mate Gabriel to further promote the cause of good and evil.

Xena has appeared in all of the series spin-offs, usually as the lead character. The animated movie Hercules and Xena: The Battle for Mount Olympus marks the first appearance of Xena outside of the television series. She also appears in the comics series Xena: Warrior Princess, originally released by Topp and Dark Horse Comics, and in 2007 Dynamite Entertainment acquired the rights to the book upon discovering the show still had many fans.

Xena is a playable character in the videogames Xena: Warrior Princess, and a selectable character in The Talisman of Fate. In 1999, Lucy Lawless also appeared in the animated television show The Simpsons dressed as her Xena character, during the Treehouse of Horror X. 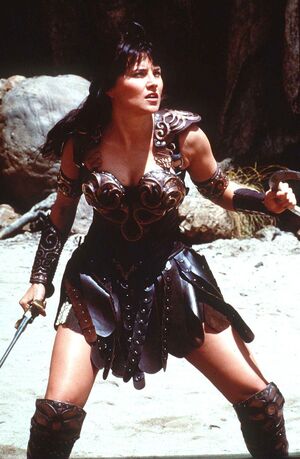 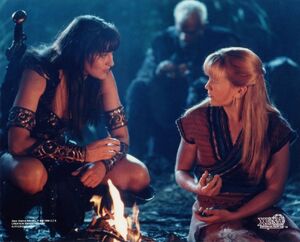 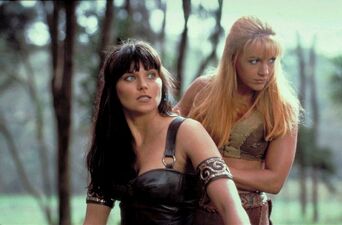 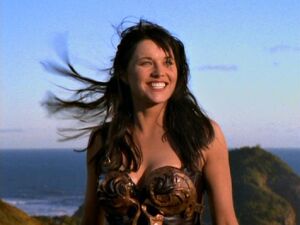 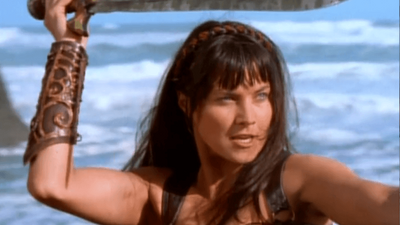 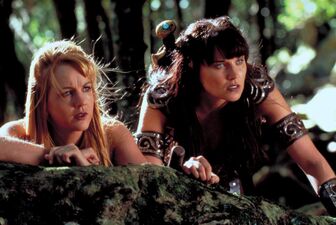 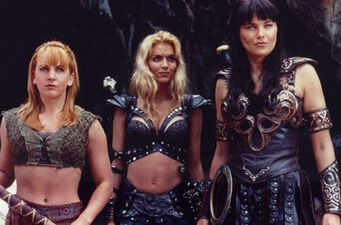 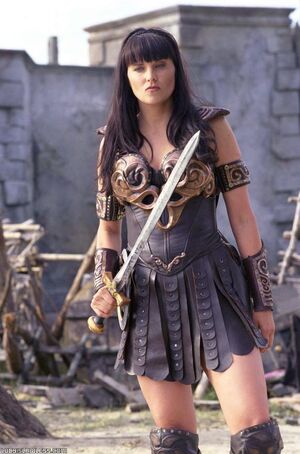 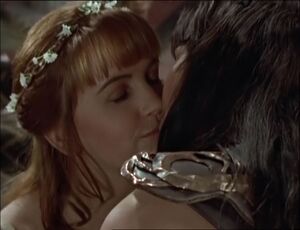 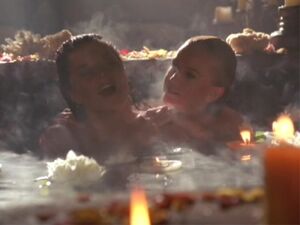 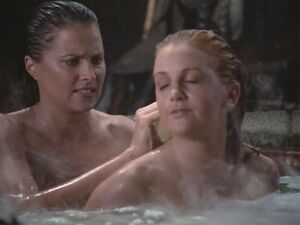 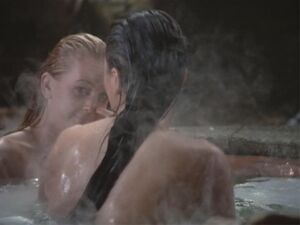 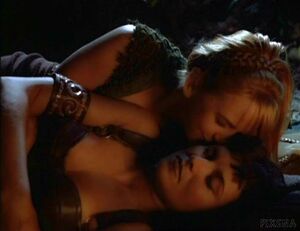 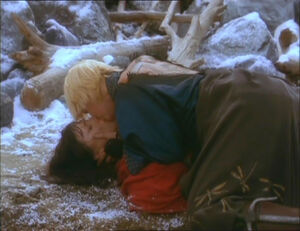 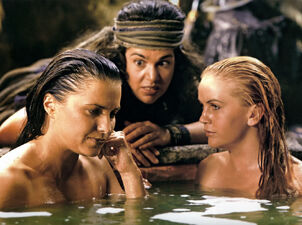 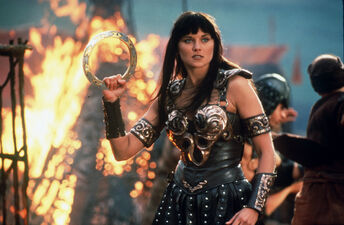 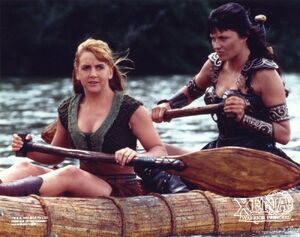 Retrieved from "https://hero.fandom.com/wiki/Xena?oldid=2238733"
Community content is available under CC-BY-SA unless otherwise noted.