Have a child with Issei.

In Love Demonic Knight
Xenovia Quarta is one of the main characters in the light novel and anime series High School DxD. She appears in Volume 3 of the light novels alongside Irina Shidou to retrieve the stolen Excaliburs as ordered by the Church. She is a natural-born Holy Sword user who wields the Durandal. After learning the truth of God's death in the war, she was kicked out of the Church, and decided to join the Occult Research Club as Rias' second Knight. alongside Kiba.

She is voiced by Risa Taneda in the Japanese version of the anime and Lauren Landa in the English version.

Xenovia is a beautiful young woman around Issei's age with short, light blue hair with a green fringe in the middle and brown eyes. Her main outfit is her Church battle outfit, which consists of a black, skin-tight unitard with short sleeves and pauldrons, matching fingerless gloves that extend to her biceps, and thigh-high boots, all of which are adorned with straps. This outfit is worn under a white hooded cloak with gold and blue accents. She also wears a crucifix around her neck, which was later removed when she became a Devil. Upon transferring to Kuoh Academy and joining the Occult Research Club, she wears the Kuoh Academy girls' uniform.

When Xenovia was first introduced, she was portrayed as an individual with a calm, quiet, and serious demeanour, putting her mission first and only speaking when necessary. She was also very cold, bordering on heartless, as shown when she called Asia a witch for becoming a Devil (even though she became one unwillingly so she could be with Issei) and even went so far as to try to execute her for her 'sins'. She later threatened to do the same to Kiba when he was technically a Stray. After being reborn as a Devil, however, she gains a very close relationship with Asia, being touched by her kindness and apologizes for calling her a witch when they first met, something she's still beating herself up over even months later.

While a faithful member of the Church, her beliefs are flexible enough to accept help from a Dragon such as receiving a free lunch (after Irina spent all their money on a fake painting of a Saint), and wanting to not only accomplish their mission, but survive afterwards as well.

In battle, Xenovia appears to be a bit arrogant, stubborn, and rarely using her head and attempting to overwhelm her opponents with pure power and strength instead of being subtle or using skill. According to Issei, her fighting style is comparable to that of a Rook despite being a Knight. As Xenovia was raised in the Church, she lacks common knowledge on the life of a normal person, evident when she brought a box of condoms to school as well as wanting to give birth to strong children, and has chosen Issei as her mate. As the series progresses, it is shown that Xenovia has developed genuine romantic feelings towards Issei due to him protecting his comrades even if he gets injured by doing so.

While still a faithful Christian, Xenovia has become extremely flexible and open-minded with her beliefs as shown when she deeply sympathized with Masaomi's tragedy and during their Second fight, she shed tears for Masaomi's agony contrary to her calm and serious nature in battle.

She was born and brought in the headquarters of the Church, Rome, so that the element to be able to wield Holy Swords would be born. Since her childhood, she has endeavored in her training and studies for God and her religion. She was also raised and trained in the Church as the wielder of Durandal with Griselda Quarta as her sword master and legal guardian.

Xenovia first appears in Volume 3 along with Irina under the order of the Church to retrieve the three stolen Excalibur swords. She and Irina formed a temporary alliance with Issei, Koneko, Yuuto, and Saji, in which they would retrieve the stolen Excaliburs fragments but would allow Yuuto to destroy one of them. During the fight with Freed Sellzen and Valper Galilei, she reveals herself to be the wielder of Durandal, and quickly turns the tide of battle by destroying the fused Excalibur and cutting down Freed. Following the battle with the Fallen Angel leader Kokabiel, she became a Devil under Rias after finding out that God died.

In the beginning of Volume 4, Xenovia attempted to seduce Issei in hopes of giving birth to a strong child (Issei's body emitting the aura of one of the Heavenly Dragons) but was unsuccessful due to the interference of Rias, Akeno, Asia and Koneko. Later, she accompanies Rias and the other Occult Research Club members for the unsealing of Rias' other Bishop, Gasper Vladi, and assisted in Gasper's training (by attempting to exorcise him). During the meeting between the leaders of the Three Factions, Issei asked Michael to allow both Asia and Xenovia to pray to God. During the attack by the Khaos Brigade, Xenovia was able to escape Gasper's time-stopping abilities and assisted in fighting off the Magicians sent by the group.

In Volume 5, she accompanies her master and allies to the Underworld for the Young Devils Gathering. In the Underworld, Xenovia trained is mastering the Durandal through the use of Ascalon. During Rias and Sona's Rating Game, Xenovia and Yuuto fought against Tsubaki Shinra, Tsubasa Yura, and Tomoe Meguri. She was defeated by Tsubaki who used her Sacred Gear to counter Xenovia's Ascalon which resulted in her elimination but she manages to hand Yuuto the Durandal before disappearing.

In Volume 6, she is reunited with Irina who had come as a representative of the Angels, and she herself became one. After helping Issei and Asia train for the three-legged race of the school festival, Xenovia attempts to "flirt" with Issei and calls for Asia to join her before they were interrupted by Irina. After Asia was kidnapped by Diodora Astaroth, the gang set off to rescue her, facing Diodora's peerage along the way. Xenovia was able to terminate his two Rooks using her Durandal and Ascalon together. After Issei defeated Diodora, Xenovia wanted to behead him right then and there for what he did to Asia but was talked out of it by Issei. When Asia was thought to be killed by Shalba Beelzebub, she broke down in grief but was relieved and cried for joy when Asia was rescued by Vali and his team.

In Volume 9, prior to her trip to Kyoto, she sends her Durandal to the Heavens to be improved. While on the train to Kyoto, she asked Issei to lend her the Ascalon, which she uses in her first battle against the Hero Faction in Kyoto. During the second battle, she regains her Durandal which has been upgraded to the Ex-Durandal after fusing the Excalibur fragments into the Durandal, hitting a huge attack on the Hero Faction. She and Yuuto then fought against Siegfried but was easily defeated by the latter.

In Volume 10, she assisted Rias in her Rating Game against Sairaorg Bael under Dice Figure Rule where she and Gasper fought against Ladora Buné and Misteeta Sabnock, with Misteeta sealing Xenovia's Ex-Durandal using his Sacred Gear. Despite so, they won after Gasper sacrificed himself for buying some time to undo the curse placed on the Ex-Durandal for Xenovia, who proceded to defeat the two of them in one strike. She then fought against Sairaorg alongside Yuuto and Rossweisse but was still defeated by the latter.

In Volume 11, she accompanies Issei, Yuuto and Akeno to the Underworld for the Middle-Class Promotion test. The team are then attacked by Cao Cao and Georg with Cao Cao using his True Longinus to shatter her Ex-Durandal. She later teleports out of the dimension created by Georg along with Irina and Le Fay Pendragon to go to the Heavens to repair the Ex-Durandal.

She returns in Volume 12 with a fully repaired and completed Ex-Durandal after gaining all seven Excalibur fragments, and assisted Irina and Akeno in facing Jeanne. While they are able to corner Jeanne, Jeanne manages to take a child as a hostage to prevent them to further attacking her. After the return of Issei and the defeat of Cao Cao, Xenovia says she wants to go on a date with Issei, as does the rest of the Occult Research Club.

In Volume 14, Xenovia is shown to be practising on how to use the seven abilities of the Ex-Durandal after giving heed to Millicas' advice and had gained mastery over four of its ability (Destruction, Mimic, Transparency, and Rapidly). During the fight against Khaos Brigade, Xenovia with the help of Sona, gained partial mastery over the remaining abilities of the Ex-Durandal. 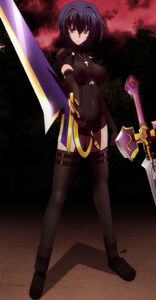 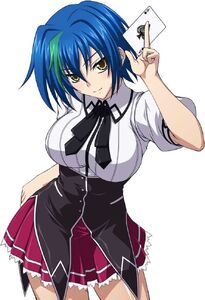 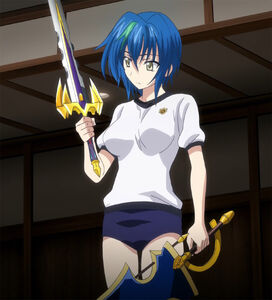 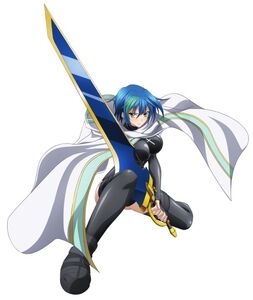 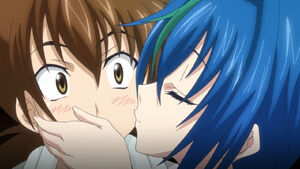 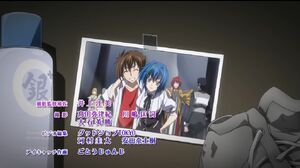 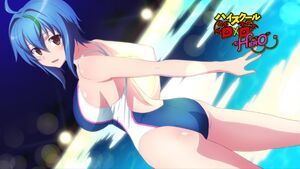 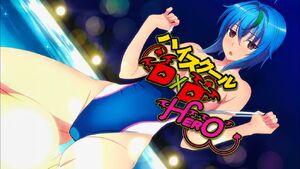 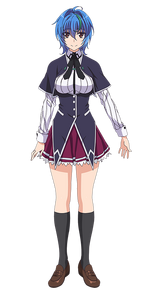 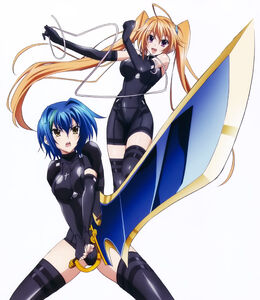 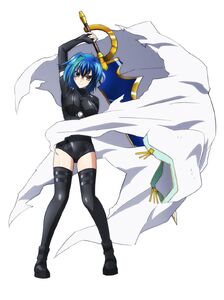