Owner of the Golden Daggers Club

Xu Xialing, also known as Xialing (Chinese: 夏令), is the deuteragonist of the 2021 Marvel Cinematic Universe film, Shang-Chi and the Legend of the Ten Rings.

She is the younger sister of Shang-Chi, the daughter of Xu Wenwu and the late Ying Li, and the niece to Ying Nan. Xu Xialing, was born to Xu Wenwu, and the late Ying Li, after her mother died, Shang-Chi was trained by the Ten Rings while she only could learn martial arts through observation. She would defect years after her brother did so, and became the owner of the Golden Daggers Club until she succeeded her father in leading the Ten Rings.

She was portrayed by Meng'er Zhang in her on-screen debut. Harmonie He portrays her as a teenager, and Elodie Fong as a young child.

Xu Xialing was born around the early 2000s to the ancient warlord Xu Wenwu and Ta Lo protector Ying Li, and is the younger sister to Xu Shang-Chi. Xialing lived happily with her family until the death of her mother, as she was killed by the Iron Gang, a rival group of Xenwu. Wenwu would want revenge on the Iron Gang for the death of his wife, and after Shang-Chi agreed to go with him on this quest, put his son through vigorous training. Despite wanting to go through training herself, Xialing was denied to train with the men, but she learned martial arts through observation. Shang-Chi would be tasked by Wenwu to kill the Iron Gang's leader, and promised Xialing that he would return soon, but he instead defected after feeling guilt for killing the leader.

Xialing was left abandoned by her brother, but waited for him to return home since she believed he would return his promise. Once she reached the age of sixteen, Xialing decided to leave from home after seeing her father wouldn't give her his empire, and decided to become a self-made woman. Becoming a criminal, she moved to Macau and formed the Golden Daggers Club, an underground fight club where challengers would battle each other.

While running her Golden Daggers Club, Xialing encountered her brother, who had come to speak to her after being attacked by the Ten Rings in San Francisco. She battles Shang-Chi in the ring and wins the fight since he refused to fight back, which allowed Shang-Chi's best friend, Chen "Katy" Ruiwen to earn money since she betted on him. After the fight, Xialing told Shang-Chi that she didn't send him a postcard, causing her to realize that the two were set up by the Ten Rings in a trap. When the Ten Rings' assassins arrived, Xialing abandoned the two, but decided to help by saving Katy from being killed. Xialing, Shang-Chi and Katy were captured by Wenwu, who planned the trap to bring back his children to his compound.

At the Ten Rings compound, Xialing and Shang-Chi learned from their father that their mother was the protector of the dimension Ta-Lo, and that he believed that her soul was trapped in the dimension since he keeps hearing her voice. The siblings disagreed with their father, causing them to be sent to a cell alongside Katy, where they met Trevor Slattery. The group escaped from the cell with Trevor's assistance, and they came across the dijiang Morris, who helped the group reach Ta-Lo. After meeting with their aunt Ying Nan, Xialing and Shang-Chi learn that Wenwu is hearing the voice of the Dweller-In-Darkness, an evil creature that wants Wenwu to break him from its imprisonment. When the Ten Rings arrived to destroy the village, Xialing participated in the battle, and helped Shang-Chi defeat the Dweller-In-Darkness with the assistance of the Great Protector.

After the battle was won and leaving Ta Lo, Xialing decided to become the leader of the Ten Rings since Shang-Chi returned to San Francisco with Katy. She made reforms on allowing women to be trained in the organization, and was informed by Razor Fist that the new subordinates were waiting for orders.

In her youth, Xu Xialing was a loving child who cared about her parents and brother, but was saddened by the death of her mother by the Iron Gang. Due to her father's neglection and Shang-Chi abandoning her, Xialing became cold and rebellious, becoming a merciless person when fighting opponents. Despite this, Xialing is compassionate and selfless, as she saved Katy Chen despite not knowing her, and was willing to participate in the Battle of Ta Lo to stop the Ten Rings from unleashing the Soul Eaters. 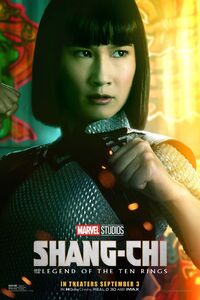