Xin Zhao, also known as The Seneschal of Demacia, is a heroic playable champion in the multiplayer online battle arena game, League of Legends.

An Ionian-born warrior raised as a gladiator in Noxus, Xin Zhao was freed by the kingdom of Demacia and impressed King Jarvan III, joining his ranks as his guard and adoptive family. He raised his son Jarvan IV as an uncle, but when the king had been slain, Xin Zhao now does everything to serve Jarvan IV and the kingdom.

The 55th champion added to the game, Xin Zhao was released on September 13, 2011. He is commonly played as a jungler.

Xin Zhao was born in Ionia, raised on a ship named Viscero. One day, they ended up crossing into the waters of Noxus, where a Noxian ship captured them and took them to Noxus. Unfamiliar with this new land, Xin Zhao rose above the ranks with his expert spearmanship, so Noxus offered him a chance to live a better life. He reluctantly accepted and entered the arenas as a gladiator, who took the name Viscero after his first home.

Viscero was a famous warrior amongst the arena, with the crowd cheering for the carnage he inflicted while the other Reckoners grew to fear him. But eventually, Boram Darkwill made a decree to privately free Noxian mercenaries, prisoners or Reckoners (Xin Zhao included) to send them to fight for Noxus in other nations. Xin Zhao was transported to Demacia, where he faced against many Demacian soldiers. Most of his fellow Reckoners ran away, but Xin Zhao refused to give up. When he was confronted by soldiers, he welcomed them to execute him, but he was instead spared and imprisoned. At his request, Xin Zhao was taken to meet their king, Jarvan III.

While his guard Tianna repeatedly threatened him, Jarvan III was more easygoing and listened to him. After their conversation, he offered Xin Zhao a bag of money to go back to his real home, but since Demacia had shown him the true meaning of the ideals he strove for, he wanted to join his guard (to Tianna's shock). He asked how Xin Zhao could prove he was capable, so he snatched a guard's spear and fought off the guards before pointing the spear at the king's throat. He apologized and prepared to get killed, but Jarvan III forgave him and accepted him into his ranks. Tianna was still distrustful of him, but Xin Zhao swore an oath to her that if something happened to Jarvan III, she would kill him by her own hand. Xin Zhao grew to become very close friends with Jarvan III (even being adopted into the Lightshield family), and taught Prince Jarvan IV to raise him into an honorable king. He believed that Demacia was where he truly belonged, serving them not for duty, but his own choice.

One day, Jarvan III sent Xin Zhao on a mission of critical importance, so he left. By the time he got back, a mage rebellion led by Sylas of Dregbourne broke out and Jarvan III had been killed. Xin Zhao felt huge guilt for his mistake, believing it was his own fault Jarvan III died. Jarvan IV requested Xin Zhao for a training spar, where he vented all of his grief and anger towards Xin Zhao for leaving his father to die. When his feelings were gone, he broke down in tears with Xin Zhao comforting him. Afterwards, Jarvan IV told Xin Zhao to burn the letter he was meant to deliver, as it was a request for Jarvan III to the leader of the Mageseekers to be more accepting of mages, but since Jarvan IV grew to hate mages due to believing Sylas and his mages to have killed his father. Xin Zhao reluctantly followed the prince's request and burned the letter, accepting what was to come.

With all of the civil unrest in Demacia, Xin Zhao was needed more than ever. With Jarvan IV forced to take the mantle as king, Xin Zhao swore his loyalty to him and promised to guide him for the days to come. 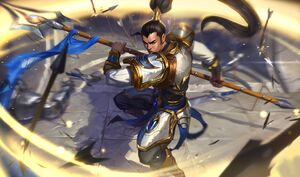 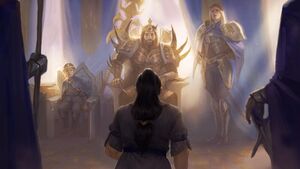 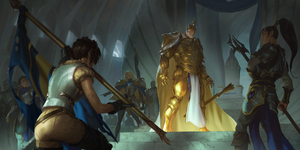