Xuan Chi is the barefoot Guardian of the Temple of the Monkey.

He is the only Temple Guardian that does not wear his Powerband, mainly because Temple Raiders raided his Temple and supposedly took his band when they kidnapped him. He escaped from them and went to the Dragon Dojo for help. Later on, he travels back to his temple to discover his Powerband was always there. The Temple Raiders came back to take it, but they lost it and Xuan has since been on a wild goose chase for his Powerband, eventually managing to get it back from the Zodiac Master. During the two part episode "The temple of the shadow dragon" the Emperor of the Darkest Yin, the Zodiac Master and some backup attempt to destroy the Dragon temple so that no one will be able to defeat him in the future. When a power blast from the Emperor and the Double Golden dragons hit Xuan Chi, the power from these blasts was enough to turn him into a real monkey. His Powerband is white colored with a light green gemstone and gives him extra agility. Xuan loves his bananas and often acts like a monkey. He is sometimes seen by others as rude and stupid, but he has been Ang’s best friend since they met. His role in the series is mostly comedy relief. 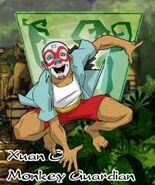 Add a photo to this gallery
Retrieved from "https://hero.fandom.com/wiki/Xuan_Chi?oldid=1001624"
Community content is available under CC-BY-SA unless otherwise noted.