To rebuild Eorzea, stop the agenda of the Garlean Empire, Primals, and Ascians.

Heroic Sorceress, Healer
Y'shtola Rhul is a supporting character in Final Fantasy XIV. A member of the Scions of the Seventh Dawn, she is a Seekers of the Sun Miqo'te conjurer who aids the player in the story. She starts helping the player if he or she starts at Limsa Lominsa, or later in the story if the player starts elsewhere.

She is voiced by Ai Kayano in the Japanese version and Robyn Addison in the English version. Before version 3.0, she was voiced by Emily O'Brien.

Y'shtola is a Miqo'te of the Seekers of the Sun with a light brown skin tone and brown markings on her face, light teal eyes, and white hair with two frontal pigtails tied with rings. She dresses in a white dalmatica with silver patterns, blue trousers and black ankle boots. She wears a visual device on her neck that allows her to analyze aetherial activities on the environment. On her neck she has the tattoo of the Circle of Knowing. She wields a one-handed conjurer wand which resembles a tree branch. On her cheek is two red stripes.

In Heavensward, her eyes turned pale white as a consequence of using a forbidden spell rendering her physically blind. Y'shtola wears a new outfit provided by Tataru Taru, a long-sleeved white top with extended sides and back and short black shorts, black thigh-high boots, and a black bolero shrug over her shoulders.

Since Y'shtola is a Conjurer, she uses healing, and wind and stone elemental magic. In the climax of the main story before 3.0, she uses a teleporting spell that takes her into the Lifestream, where exposure of it makes her magic more powerful and allows seeing aether, but it also decreases her life expectancy and makes her blind. 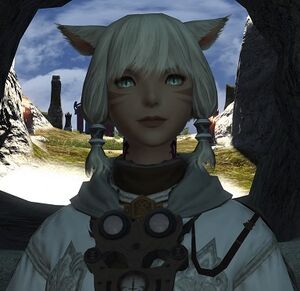 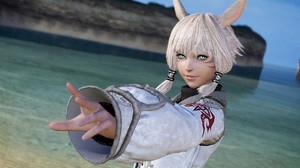 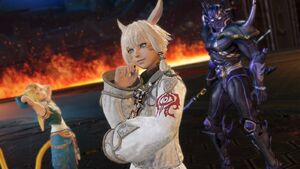