Heroes Wiki
Register
Don't have an account?
Sign In
Advertisement
in: Article stubs, Naruto Heroes, Friend of a Villain,
and 27 more
English

Leader of the Akatsuki

To become a god who ends war.

War-Stopper
Yahiko is a supporting minor character in the Naruto series.

Yahiko was optimistic and outspoken which mirrors both Naruto Uzumaki and Jiraiya's personalities. He was invested in maintaining peace in the Hidden Rain Village and wanted to improve the conditions of the country. He was supportive and loyal to his comrades, Nagato and Konan. He was very protective of his comrades such as when he was willing to sacrifice his life to save Konan from Hanzo. Yahiko believed in his comrades and the mission of the original Akatsuki.

Yahiko was the childhood friend of Konan and Nagato.

The trio were forced to survive after they were orphaned by the second war in the rain village and they encounter Jiraiya and the Sannin. Together they trained until they were old enough to take care of themselves and later.

They formed Akatsuki as young adults an idea that Tobi claimed to have given him. They met Hanzō and negotiated with him but it turned out to be a trap by Hanzō who teamed up with Danzō for their quest for power. Hanzo held Konan hostage and forces Nagato to kill Yahiko but Yahiko commits suicide to stop Nagato from having to kill. After Yahiko's death his body was used as the Deva path as part of the Six Paths of Pain by Nagato. Yahiko as Deva Path can control gravity that either repels or attracts objects.

Yahiko's body as the Deva Path. 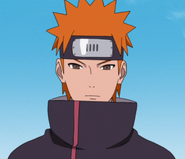 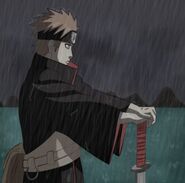