Yajirobe is a character from the Dragon Ball universe. He is a ronin swordsman introduced in the first series. Overtime, he has saved a couple of Z warriors, and has made himself useful, despite his lazy and rude cowardice. He is known for his hunger, which rivals that of Son Goku. He has a history of cooking and eating the monsters that he fights, and in at least one instance (fighting Cymbal), he has eaten a sentient opponent after killing it. He ends up living with Karin in his tower because he grows Senzu beans, one of the only foods capable of sating his appetite.

He was voiced by Mayumi Tanaka in the Japanese version, and by Lucas Gilbertson, Mike McFarland, Brian Drummond, Ed Marcus and Ethel Lizano in the English version.

Yajirobe's appearance consists of small, beady black eyes, long, untidy black hair and due to his love for food, and is quite overweight. His outfit throughout the series is typical of the vagabond ronin subtype typified in manga and anime: consisting of a sleeveless, knee-length red yukata with black stripes, a black obi, black wristbands and black kyahan (gaiters/protective shin bands), waraji (woven straw sandals worn by Japanese serfs, and samurai when wearing their armor) and an ecchu fundoshi (type of red loincloth worn by samurai and ronin). He usually keeps his katana tucked into the left side of his obi. Later, in the last Dragon Ball Z arc, he grows a small moustache and he also sports a fur vest.

Yajirobe is very asocial, preferring to be by himself often so he can eat peacefully, and often acts rude towards others. Yajirobe enjoys consuming large amounts of food and has a grumpy attitude to those who bug or distract him, even in the slightest. He enjoys eating wild roast pig and also possesses a particular affinity for steamed pork buns (butaman in Japanese); which he is depicted eating in several scenes throughout the series and regrets not consuming more when he thinks Vegeta is about to destroy the Earth during the Vegeta Saga. Also true to the vagabond ronin stereotype, Yajirobe is unkempt and does not care if his loincloth is visible to other people. According to the Daizenshuu and other databooks, Yajirobe enjoys driving stolen cars. He also enjoys fishing, hunting and taking afternoon naps. He is somewhat characterized as a coward because he tries to avoid major skirmishes, as seen with King Piccolo and Vegeta, but prefers to be thought of as intelligently careful.

In spite of his cowardly and asocial traits, Yajirobe does possess a more honorable and noble side which is shown on several occasions. After Goku took a brutal beating at the hands of King Piccolo, Yajirobe rushes to his aid and helps him regain consciousness by supplying him with water from a nearby river. He later assists the weakened Goku by taking him to the top of Korin Tower, thus allowing him to drink the Ultra Divine Water which proves pivotal in the defeat of King Piccolo. Also, had it not been for Yajirobe catching him as he was falling to the ground after his battle with the Demon King, the heavily wounded Goku could have perished. In the Vegeta Saga he once again saves Goku from being crushed to death by the Great Ape Vegeta by severing the Saiyan Prince's tail and reverting him back into his humanoid form, which helps significantly in giving Gohan and Krillin the upper hand in the battle ahead. Later, after the Spirit Bomb fails to kill Vegeta, Yajirobe (the only fighter not worn out by the battle with the Saiyans) risks his life to save Gohan from Vegeta's wrath by severely wounding the Saiyan with his katana. Though this only angers Vegeta even more but gives Gohan the time he needs to transform into a Great Ape and finally defeat the Saiyan Prince once and for all.

Yajirobe was first introduced in the King Piccolo Saga as a wandering ronin with an insatible appetite. He met Goku after the latter ate his breakfast which consisted of a huge fish. Upset, Yajirobe engaged Goku in combat. The two had an even fight and both surprised each other with their strength and endurance. After stalemating, they were approached by the third spawn of King Piccolo named Cymbol who was after the Dragon Ball Yajirobe owned.

After winning a game of Rock - Paper - Scissors with Goku, Yajirobe personally challenges Cymbol in a fight. Yajirobe quickly recovers from Cymbol's physical blows and successfully evades the demon's Beam Rays as he sprints towards Cymbol and slices him with ease. Cymbol is then subsequently roasted and eaten by Yajirobe as a replacement for his lost fish.

Afterwards, Yajirobe witnesses Goku murder Tamborine in revenge for Krillin, and hides as King Piccolo brutally beats down Goku. Yajirobe helps the severely injured Goku and decides to help him get to Korin Tower after being promised special food by Goku.

With the initial assisted help from Bora, Yajirobe manages to successfully climb to the top of Korin Tower with Goku on his back. Once at the top, Yajirobe gets aquinted with Korin and introduced to the rejuvinating Senzu Beans.

Later, Yajirobe watches Goku power up from the Ultra Divine Water and King Piccolo's demise at the hands of Goku. Yajirobe manages to saves Goku's life by catching him before he hit the ground, and is seen leaving with Goku to heal his wounds at the Korin Tower.

Three years later, Yajirobe disguises himself and enters the 23rd World Martial Arts Tournament. Unfortunately, Yajirobe is easily defeated by a disguised Kami in the last match of the preliminaries.

After the end of the Tournament, Yajirobe assists a severely injured Goku by handing him a Senzu Bean.

After a five-year timeskip, Yajirobe is instructed by Kami gather all of the Z-Fighters to receive training for the arrival of two more Saiyans after the Saiyan Raditz. Yajirobe arrives at Kami House and delivers the message to Krillin who in turn alerts the others.

Once at Kami's Lookout, Yajirobe trains with Krillin, Yamcha, Chiaotzu, and Tien for a year. Despite his lack of enthusiasm and spending most of his time eating, he does end up surpassing Kami and Mr. Popo in power.

When the Saiyans finally arrive, Yajirobe initially decides to not get involved but eventually watches from the sidelines as Goku battles Vegeta and most of the Z-Fighters except Krillin and Gohan are dead.

At a seemingly hopeless moment in the battle, Yajirobe unexpectedly pulls through as he cuts of the tail of Vegeta transformed as a Great Ape from behind. This results in Vegeta losing his transformation and most of his power.

When Vegeta eventually reclaims the upper hand, Yajirobe once agains helps out by slashing Vegeta's battle armor from behind to protect Gohan. Yajirobe initially assumes he killed Vegeta and arrogantly brags about his victory. Once Vegeta regains conciousness, he brutally beats down Yajirobe as payback.

Yajirobe is seen with the group at Wunkong Hospital in West City healing from his injuries from the battle with the Saiyans. Yajirobe's injuries were relatively minor, so he wasn't kept in the hospital like Goku.

Yajirobe eventually delivers a new crop of Senzu Beans to Goku to instantly heal from his injuries and allow Goku to travel to Namek.

Yajirobe briefly appears in the Android Saga to deliver a fresh bag of Senzu Beans to the Z-Fighters but doesn't join the join out of not wanting to get killed.

While leaving in his hovercraft, Yajirobe is attacked by Androids 20 and 19. However, he survives and is carried to safety by the Z-Fighters.

Eventually, Yajirobe is seen at Korin Tower as Goku tests his new power in front of Korin to compare to Perfect Cell. 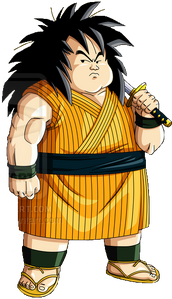 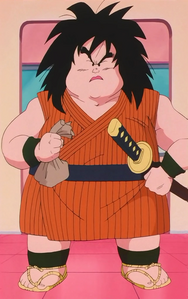 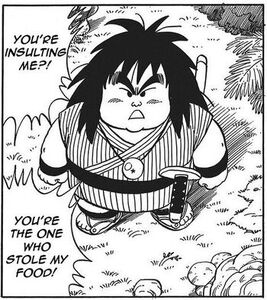 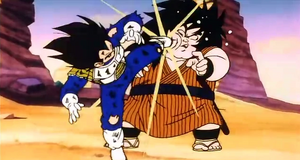 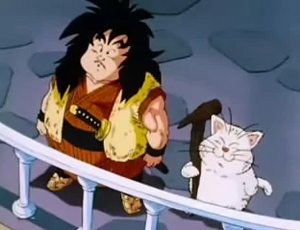 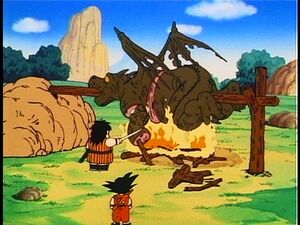 Yajirobe killed Cymbal one of King Piccolo's mutanted children and is eating him. 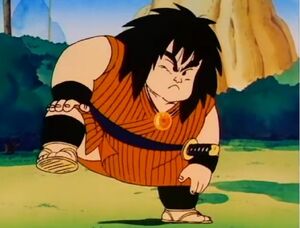 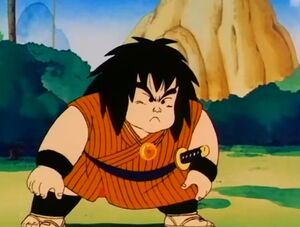 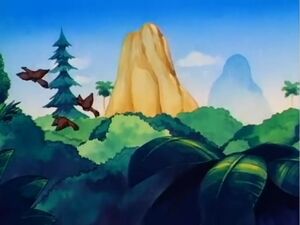 Yajirobe made the ground shake with a little bit of on earthquake after stomping his foot. 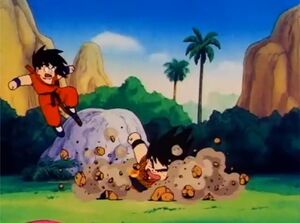 Yajirobe makes a hole with his strength after Goku dodges the attack. 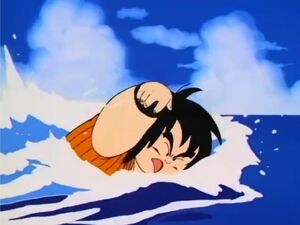 Yajirobe swimming across the ocean. 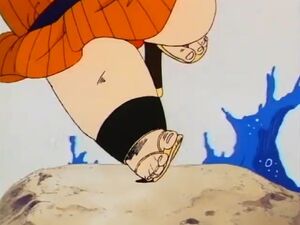 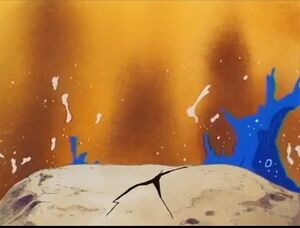 Yajirobe cracked a rock with one kick. 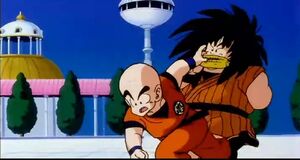 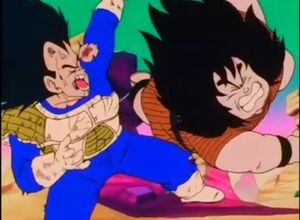