Yamato is one of the main supporting characters in the Naruto anime/manga series and the Boruto: Naruto Next Generations anime/manga series. He is an ANBU in the service of Konohagakure. Because of his unique jutsu, he is added to Team Kakashi as a temporary for Kakashi Hatake. Though Kakashi eventually returns to the team, Yamato stays on to provide assistance when he's needed.

He was voiced by Rikiya Koyama and Eri Gōda (as a child) in the Japanese version, which in the English version, Yamato was voiced by Troy Baker and later by Matthew Mercer.

Yamato has short brown hair and black, almond-shaped eyes. While still a child and test subject of Orochimaru, he had long hair going past his shoulders. When he débuted, Yamato wore the standard attire of the Anbu, with a sword strapped to his back, a mask that resembles a cat's face covered in green, and red markings, and the Anbu tattoo on his left shoulder. When he meets up with Naruto, Sakura, and Sai for the first time, however, he has changed into a variation of the standard attire of a Konoha-nin, with a flak jacket. The differences between his attire and that of the standard one is that his does not have the Uzushiogakure crest on the shoulders of the sleeves, and the neck of his shirt is form fitting and goes up to his chin. He also still retains two hip pouches strapped to his lower back instead of just one. In addition to that, he has a happuri-style forehead protector that frames his face, similar to that of Tobirama Senju.

Yamato is a very discreet, cautious, careful and well prepared person. He projects a calm, stoic demeanour in stressful situations. He takes his missions very seriously, even insisting on being referred to by whatever his current codename. Yamato also takes great interest in architecture which can be seen when he goes out on missions and creates a house to "camp out" in. This skill to incorporate his hobby with his kekkei genkai was also seen after Pain's assault on Konoha where he was key in recreating the village. While he has been good-natured so far, Yamato claims to be a different sort of leader than Kakashi, one who is not above "ruling by the use of terror" when his team misbehaves. Aside from his obviously intimidating skills as a ninja, however, this "terror" has so far primarily consisted of casting a creepy "ghoul-eyes" expression at his charges. Naruto, especially, is easily terrified by it, and stated that it felt like Yamato was controlling him with fear — something Yamato himself has noted that he has no qualms with. He is, however, also prone to being a victim of a cruel joke when given misleading information, as witness his visible fear and subsequent annoyance when Killer B maliciously joked about the dangers of a jinchūriki trying to control their tailed beast.

Yamato was one of Orochimaru's test subjects, having implanted the D.N.A. of The First Hokage into him as a small child to try and replicate the 1st Hokage's unique bloodline limit that allowed him to use wood Jutsus. However, Yamato was only one of 60 test subjects and believing all of them had died due to the experiments, Orochimaru fled the Hidden Leaf village without checking. Yamato would survive and thanks to the D.N.A. of the 1st Hokage, he would greatly excel as a ninja and even become the Anbu captain after Kakashi stepped down. He is currently the leader of Team 7 under the orders of the 5th Hokage. Due to the inclusion of Sai as Sasuke's replacement, there is some animosity that Yamato has to keep under check, going as far as saying that he will rule with terror... which is ultimately a scary face that only frightens Naruto.

Yamato accompanies Naruto, Sakura, and Sai to the Heaven and Earth bridge to meet Sasori's spy and uses Transformation to make himself look and sound like Sasori in his Hiruko puppet. The spy turns out to be Kabuto and everything goes relatively smoothly until Orochimaru appears, revealing that Kabuto and Orochimaru had planned on killing Sasori. When Naruto started sprouting his tails and made the bridge collapse, Yamato used his mokuton abilities to catch Sakura when she fell. After dealing with Kabuto, Yamato used his other ability to subdue an out of control 4-tailed Naruto, which is why Tsunade made him the new team captain.The Team 7 have looked for Sai after his betrayal to the team. However, after seeing him, they were able to find out more about Sai's personality and joined the team. Kabuto then appeared and untied Sai from Yamato's wood ties and battled the team. Believing that Sai really have betrayed the team, yamato was surprised to see Sai helping them. Yamato then led the team inside orochimaru's hide out and seeked for Sasuke. After the encounter with Orochimaru, the team then encountered Sasuke who have already changed and fought them. Yamato have been brutally hurt but was able to recover after making a counter strike against Sasuke's technique. The Team then went back to Konoha and reported to Tsunade where he reveals Sai's relation with Danzo. Yamato would go onto aiding Naruto in his wind affinity training, keeping the Kyuubi under control since the seal on Naruto is weakening, allowing the Kyuubi more influence over Naruto as his anger spikes. He'd then accompany Naruto to aid Kakashi against Kakuzu after his technique was finished. They made their entrance blocking Kakuzu's wind fire attack with their own combined wind and water techniques to create a typhoon. After Naruto misses his first attempt with his new raseangan Yamato protects him while Kakashi gets him away from kakuzu. After defeating the akasuki members they travel back to Konoha. After another meeting with the kage they decide to take Naruto to an island where Killer Bee stays and trains with their tailed beast. They also decide that Yamato go with him too. when they arrive at the island they are attacked by a squid, which Yamato states he only has 6 tentacles and Naruto thinks is the Octopus that he was supposed to meet. When they get settled on the island Yamato and the guide take him to a waterfall where he must face his inner self. Yamato the waits for Naruto to complete his task. When Naruto is sitting around after his fight with his inner self Yamato and their guide get attacked by the squid again. Yamato tries to restrain the beast while they try to get the guide back, but Killer Bee comes and knocks the squid away before anything else happens. After that he just tags along with Naruto and Killer Bee to the waterfall of truth and once Naruto wins Yamato asks if he can come and follows them behind the waterfall. They then go to a lions mouth and Killer Bee tells Naruto has to put his head in the mouth and see if it will accept him, if it doesn't it will eat his head off. Naruto plays a trick on Yamato and pretends his head got eaten but tells Yamato it was a joke. Yamato becomes really mad and calls them stupid idiots. Then they go in the room where Yamato sits with them while Naruto and Killer Bee fight the Nine-Tailed fox. When the foxs hatred starts to take over Naruto Yamato says that he will try and hold it back while Naruto meets his mother beneath all the hatred he is going through. When Naruto finally manages to control the nine tail's chakra he notices Kisame in Killer Bee's sword, Yamato states that the chakra gives him the ability to sense hatred. Later on when Kisame is captured he is put in a wood element prison that Yamato made but breaks out of it to Yamto's surprise. When the island is attacked by Kabuto Yamato tries to make it seem like their are earthquakes so that Naruto wouldn't notice. he eventually gets caught in a fight with Kabuto and Kabutos snake form swallows and captures him. Later he is seen on the ground if front of Madara who is talking about how to use his powers to make more clones. Madara also states that his left eye is ready for a fight showing that he has the rinnegan. 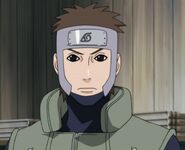 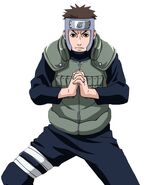 Yamato in Boruto: Naruto Next Generations

Retrieved from "https://hero.fandom.com/wiki/Yamato_(Naruto)?oldid=1909393"
Community content is available under CC-BY-SA unless otherwise noted.