Heroes Wiki
Register
Don't have an account?
Sign In
Advertisement
in: Spoilers, One Piece Heroes, Samurais,
and 34 more

To become a member of the Straw Hat Pirates and see the world outside of Wano.

Yamato, also known as the Oni Princess, is a major character of One Piece who appeared in the Wano Country Arc. She is the daughter of one of the Four Emperors of the Sea, Kaido who holds many epithets. Since the moment of his death 20 years ago, Yamato idolized the legendary samurai, Kozuki Oden when she was just 8 years old, and started declaring herself to be Oden. She was constantly abused by her father in her childhood and imprisoned on Onigashima some point later. Despite that, she has fought her father countless times only to be repelled, with each failure making her stronger.

She befriended Portgas D. Ace who arrived on Wano 4 years prior to the current story. She also gave him her vivre card. Four years later, she met his sworn brother, Monkey D. Luffy, and declared that she would join the Straw Hat Pirates after the war.

Yamato is voiced by Saori Hayami.

Yamato is a rather tall woman, being twice Luffy's height. She has long white hair tied into a ponytail using orange rods. Her white hair eventually fades into an aqua-green and bluish colour the further it goes down. She has orange coloured eyes with well-defined eye lashes. One of her most distinctive feature is her red horns.

Clothing wise, Yamato chose to don a similar type of clothing reminiscent of Kozuki Oden. In the past, she also commonly wore a Hannya mask. She later tore off the sleeves and removed the mask after revealing her true gender as a female to Luffy. She is also seen wearing gold hooped earrings.

Since Yamato's childhood, she idolized Kozuki Oden, and wanted to become like him after seeing his excecution where he saved his samurai at the cost of his life. However, because of this admiration that caused her to want to become "Kozuki Oden", she sounds almost child-like in her declarations, often creeping out the other retainers whenever she introduces herself as such.

Yamato has a particular hatred towards her father, Kaido, for his constant abusive treatment to her since childhood. This was further strengthened after realising that he indeed placed explosive handcuffs on her, which would have detonated if she were to leave Onigashima. She laments how any father could have done this to their child, no matter how sour their relationship was.

Following Kaido's betrayal of Orochi, she disagreed with his idea of making her the new Shogun of new Onigashima. Despite the hatred Yamato has for her father, she didn't in good faith believe that he'd try and kill her using explosives, but she later disowned him as a father after witnessing that the handcuffs did, in fact, trigger a massive explosion after Luffy removed them, tearfully announcing that she does not care if he dies.

Due to being secluded in Wano's Onigashima her entire life, Yamato desires to see the outside world and venture out of Wano, is similar to Oden. This is further shown in her initial encounter with Ace who started explaining his travels around the world, causing her to react almost like a child would. Therefore, she waited patiently for the time that she would meet Ace's brother, Luffy so that she could join his crew, which she openly declared to Kaido that she'll be leaving out to the sea with them after defeating the Beast Pirates.

An additional affect of her forced isolation is that Yamato doesn't appear to be aware of the use of nicknames. This was first shown as she believed Luffy forgot her name after he nicknamed her "Yamao" similar to Law, who he calls "Traffy", and Kid, who he calls, "Jaggy".

Yamato is the daughter of the highest bounty pirate in the world, Kaido, and an unnamed woman, however, the current status of her mother is unknown. She is presumably a child of an Oni. Twenty years prior, she witnessed the death of Kozuki Oden in the Flower Capital during the legendary hour, which was the same time that she started to idolize him and the other Nine Red Scabbard.

Days after Oden's death, Yamato told Kaido that she wanted to be like Oden. He then physically punishes her for making such a statement, and decided to starve her so she would repent. She also showed her first signs of Haoshoku Haki at the age of 8 after being tied to a rock and having those around her suddenly become unconscious. Despite praising her for awakening such a rare ability, her father told her that she'll be better off dead if she continues saying she was Oden. He then locked her up in a cave with no hopes of escape for a month.

Additionally, he also added 3 Samurais into the cave, thinking that they’ll kill her as she was the child of the person who took everything away from them. To add further impetus, he only gave 1 portion of food and numerous swords so that they would fight over the food.

Astonishingly, the Samurais unanimously decides to give Yamato the food, sympathising with her for being born into such a family. Furthermore, they also taught her how to read Oden's Logbook after she told them that she couldn’t understand the big words.

Yamato becomes greatly appreciative and tearfully vows to go out to sea and become stronger in an attempt to take back Wano's freedom from her father. The Samurais decides to imparts their wishes and hope onto Yamato, making sure she survives to contribute for a better future.

Many unnamed people felt sympathy for the Young Yamato including some from her father's crew. They even offered her food and blankets to make her situation a little better but were executed soon after when they were found out. Yamato was seen crying and eavesdropping when they were being crucified, silently listening to others push blame onto her as the cause of their deaths. She was told by the father that it was beneath her to form friendship with humans and was beaten harshly for it. Furthermore, her father incited that she was always alone, hopping about the rocks, crawling through the attics and told that it was her fate that everyone who ever showed favour to her ends up dead.

Some time ago, Yamato ate an incredibly rare Mythical Zoan Devil Fruit unknowingly when she was hungry, unaware of the importance of such a fruit.

As the daughter of the Strongest Creature in the World, Kaido, Yamato is an extremely powerful warrior. She is strong enough to earn recognition from the Tobiroppo, six powerful and famous pirates who have all eaten Ancient Zoan Devil Fruits, all of whom noted that it'd be a difficult task to bring her in.

Superhuman Physical Prowess: Yamato has immense physical abilities that resembles her father as shown when she defeated Ulti with little effort, and moved fast enough to hit her without giving her the chance to avoid it. She later outran Ulti, Page One, and several other pursuers at high speed, while carrying Luffy. Yamato was capable of matching and surpassing the strength and speed of Luffy who was using a Haki-enhanced Gear Second and Gear Third without showing any difficulties in fighting him. Most notably, she was still in seastone Handcuffs at this moment, which is known for severely weakening devil fruit eaters like herself. She is able to endure cannonball shots at point blank and fight without fatigue afterwards. Without her restraints, she is seen competing fairly evenly with her father at his strongest hybrid form.

Yamato is one of the few characters capable of using all three types of Haki and at least two advance applications of it.

Yamato possesses the ability to use Haoshoku Haki, which is a rare power said to exist within one in several million people and also described as being chosen by Heaven, holding the qualities of a "King". She used this for the first time against the Beast Pirates when she was just 8, knocking them unconscious.

Years later, she has shown the advanced application of this through "infusing" it into her kanabo, causing dark lightning to be emitted from it. Yamato showed it for the first time during her clash against her father's Haoshoku Haki-infused Raimei Hakke using her own Raimei Hakke.

Yamato has masterful usage of Busoshoku Haki, allowing her to harden her hand and coat her Kanabo in it, creating an effect similar to black lightning before attacking Hatcha. She can also use this Haki at an advanced degree, being able to discharge it from a great distance, hitting opponents backwards with tremendous amounts of force. Furthermore, she was able to fight and damage Portgas D. Ace, who'd eaten a Logia Devil Fruit using this branch of Haki.

Similar to her father, Yamato's main weapon of choice is a Kanabo mace, which is somewhat more studded and slender compared to Kaido's spiked Kanabo.

Yamato ate a Mythical Zoan Class Devil Fruit known as the Inu Inu no Mi, Model: Okuchi no Makami, which allows her to willingly transform into a hybrid or full form of the wolf deity described as being the Guardian Deity of Wano. It was a valuable fruit that Kaido himself worked hard to get, however, she ended up accidentally eating it without knowing what it was out of hunger. A Mythical Zoan is said to be the rarest and most powerful of the Zoan sub types as well as also being rarer than Logia fruits.

In her hybrid form, Yamato appears to be something akin to a werewolf. Her canines are sharp, and there's a flame-like aura shown around her entire body constantly. In particular, her horns also becomes more elongated. Similar to other Zoan users in their Human-Beast Forms, more so a carnivorous one with fangs and claws, Yamato also has enhanced physical abilities, which allows her to fight against Kaido in his Human-Dragon Form.

Since Yamato uses a Kanabo similar to Kaido, most of the attacks seen thus far comes from her using her club to attack her opponents with incredible force. 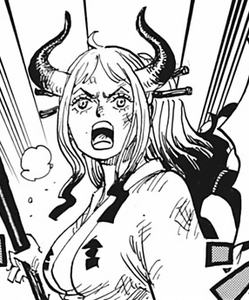 Yamato's kimono 3-4 years ago with an oden skewer symbol. 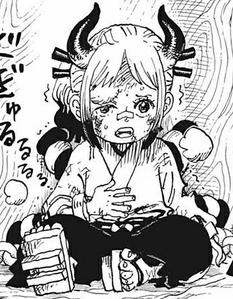 Yamato as a child shortly after Oden's execution. 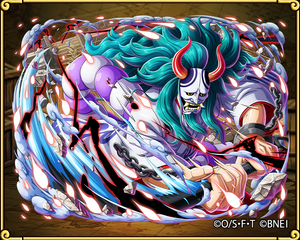 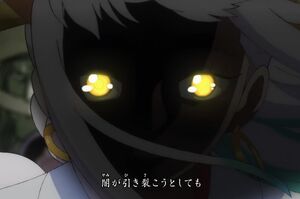 Yamato in the opening. 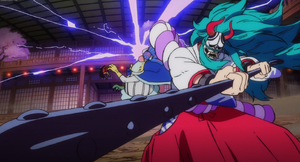 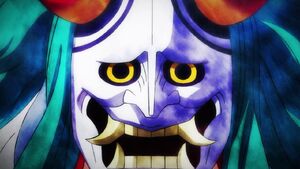