Yasha of the Seven Deities

Uncle Yasha (by his niece Mithra)

Former member of the Eight Generals

Aid Deus with his goals (formerly)

Yasha is one of the members of the Seven Deities, and the deuteragonist in the video game Asura's Wrath. He's both Asura's brother-in-law, and rival.

Yasha was originally of the Eight Guardian Generals and Asura's brother-in-law and former friend, as well as the uncle of Mithra. He and Asura were training under Augus until Deus took him under his wing. Together with Asura and the other Generals, he fought the dark forces of the Gohma. However, after his sister, Durga, was murdered, Yasha started to hate Asura and blamed him for her death. After seeing all the suffering caused by the Gohma, Yasha decided to join Deus' "Cause".

Yasha is a kind and benevolent demigod who strives to protect Gaia and appeal to a morally correct standard. He was seen as notably depressed by the plights of both demigods and humans and strived for a way to bring peace to the world. Yasha is in a number of ways the antithesis of Asura. He is emotionally cool, level-headed and melancholic; traits that oppose Asura's seething rage and hot-blooded passion. He was willing to sacrifice his own life in the end for a chance to stop the destruction of the world. Due to Asura being his former best friend/rival and brother in law, Yasha tended to have many heated arguments with him about who was stronger and behaviors which flared into combat and ended in calm reconciliation. Yasha also had a close bond with his sister, Durga, and was devastated over her death as well as tormented by the fact he could not avenge her life. Although he joined the Seven Deities, he was still unsure whether or not he should help his former best friend Asura in his quest for vengeance or stay on the side of his fellow deities.

Due to the many purifications and harvests of souls done by him and The Seven Deities, he became incredibly distraught and unsure of himself and the Deus' grand plan to save the world at the cost of so many innocent lives. During his time as one of The Seven Deities, Yasha also displayed self-loathing and hatred for his own atrocities, referring to himself as a "demon" for following the cause.  He began wearing the golden mask to suppress his emotions, but even that did not hide the sorrow he felt for his actions. Yasha also harbored a hidden temper which notably flared when dealing with those who refused to listen to reason or were committing actions he felt were deplorable (i.e. Asura's uncontrollable temper and Deus' orchestration of murders).

As one of the elite fighters of the Seven Deities and the Former Eight Guardian Generals, Yasha is immortal and possesses superhuman strength, speed, durability, dexterity and endurance.

Due to his extensive training as a soldier, a martial artist and a member of the Eight Guardian Generals, Yasha is an exceptional warrior and has mastered many areas of fighting including hand-to-hand combat. His extraordinary hand-to-hand combat ability makes him one of the finest combatants in the Demigod Fleet on par with Asura in terms of physical combat skills. Even before Asura's supposed betrayal, Yasha was his equal which was not only the reason for their rivalry, but also for their close friendship. Yasha also possesses incredible speed which he especially emphasizes on in combat, allowing him to appear in place within a seconds and move within the blink of eye. He also has considerable endurance, as he was able to remain active in various arduous situations even after battles with powerful opponents such as Deus, The Gohma Vlitra, and Chakravartin, and still have enough strength to fight Asura before his death.

Yasha also possesses a unique ability where he can form blue energy blades which can slice through anything, even the hardened body of the Gohma. Yasha also uses an energy enhanced kick which has the raw power to smash through every known material. 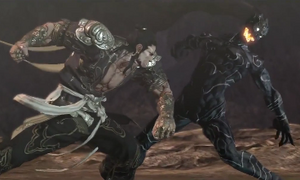 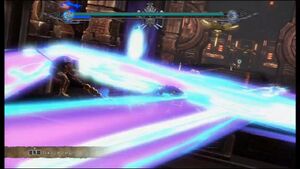 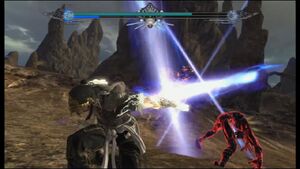 Yasha cutting through Gohma with his hands