Fighting with his sword

Killing his attackers
Playing his flute

Fight off anyone who tries to kill him

Yasuo, also known as The Unforgiven, is a heroic playable champion in the multiplayer online battle arena game League of Legends.

An Ionian swordsman who trained under Elder Souma, whom taught him his signature wind technique. Yasuo abandoned his duty to protect his master to fight in the war between Ionia and Noxus, but Souma was killed by the time he returned. Yasuo was accused of being Souma's murderer due to the crime scene resembling a wind technique like his, resulting in all of his friends and loved ones turning on him. Yasuo had to kill them all out of self-defense, including his brother Yone. While he eventually had his name cleared and got to meet his resurrected brother, he still carries guilt within his heart wherever he goes.

The 117th champion released in the game, Yasuo was released on December 13, 2013. He is often played in the top or middle lane.

Even as a child, Yasuo was a pariah amongst the others in his village, who called his existence a mistake. His mother was a widow already raising a son while his stepfather abandoned the family after not even a year had passed. Yasuo was inseparable to his older half-brother Yone, whom defended him from being teased by the other kids and inspired him to enter the sword school. There, Yasuo's natural skill caused lots of envy amongst his peers and attracted the attention of Elder Souma, who saw great potential in him.

Yasuo refused at first, but Yone advised him to tone down his arrogance, giving him a maple seed as a symbol of humility. Yasuo then accepted to be Souma's pupil and bodyguard. One day, the Noxian Empire invaded Ionia, and Yasuo wished to fight in the ensuing war like his classmates and brother, but he was refused as he was reminded of his duty to protect the elders. Still, Yasuo entered the war, but by the time he arrived he saw a gruesome scene littered with the corpses of both sides, a result of a chemical bomb produced by the Noxians' ally Singed.

When he returned to the village, he was accused of not only dereliction, but also the murder of Elder Souma as he had been killed by a wind technique. His classmates all turned against him, and for years Yasuo wandered Ionia trying to look for the Souma's true killer while he was regularly attacked by his former allies, leaving no choice but to kill them in duels to the death where Yasuo won every time. He eventually came across his own brother Yone, whom duelled against him until eventually Yone was killed, leaving Yasuo with a scar on his face. As Yasuo held his brother in his arms, the latter asked him why he was running, before leaving the physical realm.

Yasuo found solace in teaching the young Shuriman stone mage Taliyah, whom he taught elemental magic and the teachings of his master. Eventually, Taliyah said her goodbyes after hearing of rumors of the resurgence of Shurima. Yasuo went back on his mission, until one day the truth was finally revealed. A Noxian defector named Riven wanted to destroy the runeblade that connected her to Noxus, and wanted Elder Souma to help her. He used his wind technique to break the blade, but one of the shards flew towards him and killed him, causing Riven great remorse. Ionia had spared her from harsher punishment due to it being an accident, but she had to pay community service, which luckily for her allowed her to bond with her adoptive parents in Ionia. Despite being responsible for the tragedy, Yasuo held no grudge towards Riven, only blaming himself since leaving Souma unsupervised caused him to be suspicious in the first place, which resulted in the deaths of all of his peers including his brother.

Kin of the Stained Blade

After having a flashback of his duel to the death with Yone, Yasuo was guided to a lake where he gave him a drink, which turned out to be poisoned. The elder revealed himself to be an azakana, an emotion-eating demon, and prepared to prey on Yasuo when a mysterious masked swordsman appeared, telling Yasuo that he wasn't after him this time. The two fought at first, but after showing his crossed-sword pose, Yasuo recognized that the masked man was none other than Yone, whom had taken his new appearance after being cursed with an azakana mask and returning to life to slay the one who cursed him in the first place. The brothers both defeated the azakana before parting ways.

Yasuo later befriended a vastaya named Ahri who wished to find clues about who she is, becoming her bodyguard. Together, they fought off several more azakana, and joined a group of champions in Bilgewater to head to the Shadow Isles to stop the Ruined King.

Yasuo as he appears in Legends of Runeterra.

Yasuo as he appears in "Brotherhood".

Yasuo and Riven in "Confessions of a Broken Blade".

Yasuo and his brother, Yone, in "Kin of the Stained Blade". 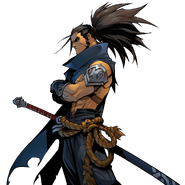 Yasuo as he appears in The Ruined King.