Teleportation, Can destroy Phantoms with a Regalia, Master swordsman

Build his own shrine (made for him by Hiyori), Become a god that everyone worships, To never be forgotten

Yato, originally called Yaboku, is the main protagonist of the anime/manga series Noragami, and the 'stray god' of the title. He is a minor god who desires one day to be worshipped by the masses. To achieve this, he works as a delivery god, taking whatever job people give him for 5 yen. Despite coming across as lazy, selfish, greedy and an outright pervert most of the time, deep down inside his soul lies a very tragic, remorseful figure. As a god of war born from a wish, he killed many people in his past (including many Regalias) and eventually became sick of it and now desires to leave that past behind.

He is voiced by Hiroshi Kamiya in the Japanese version of the anime and Jason Liebrecht in the English version, the latter of whom also voices Hei, Syaoran and Lavi.

Yato appears to be a young man, with shaggy black hair that reaches to his neck, and bright, striking blue eyes. He is often seen wearing a sweater jersey and track pants, and an old white bandana/cloth around his neck, which he describes as 'fluffy fluff' (fuwa fuwa). He also wears a pair of brown knee-length boots.

When imagining his future as a popular god, Yato wears a red cape and a golden crown, and is often seen with a pink fan within his imagination.

In the distant past, Yato tied his hair up to a short ponytail and wore a dark kimono.

In Chapter 39, Yato has bought a new jersey that has the same design which was bought thanks to Kazuma's money. In Chapter 40, Yato ties his hair like in the past and is wearing his new jersey.

Yato is often very playful and sneaky, doing silly and childish things such as buying good luck items that are obviously a scam, giving Yukine a childish jacket and other things. He is very determined to become more popular as a god, often either placing his cell phone number everywhere or doing a job. However, he also slacks off occasionally and is shown to be very careless with his money, such as when he threw away 200,000 yen on a plastic good-luck charm.

There are also times, however, when Yato appears very serious and mysterious, like when he meets with Nora or other certain situations. Yato can be crude and unpredictable, although it is hinted that he can also be a cruel and merciless person. These actions might have been motivated by his need to at least exist in people's memories. He answers people's prayers and demands money in return for his help (5 yen, the amount that is traditionally placed in a shrine before praying). He graffitis his cellphone number in various places, but it only appears to people who are in desperate need of his aid. As egotistical as he can be at times, Yato has shown he has a good heart as early as the beginning of the series, when he willingly released Mayu from her service instead of forcing her to stay with him or even become a Nora.

Yato views gods, himself included, as above such things as good and evil, and therefore is convinced they can do no wrong. He uses this belief as a way to explain why Regalias sting their masters, but not the other way round; Regalias were once humans, and therefore sin, but gods are higher beings, and therefore can do whatever they want. He also uses this to counter Kugaha's argument that Bishamon has become weak due to taking any spirit she finds as her Regalia, and compares his attempts to force her succession to a spoiled child trying to kill his parents. Despite his words, however, Yato has shown that there are lines he's not willing to cross; when Hiyori suspects that he robbed a bank when she sees him with a huge amount of money (that he got from Ebisu to build his shrine) Yato is actually offended, asking her what she takes him for.

Yato is seen to have a very low tolerance for weak spirited people, and if they want to commit suicide he has little motivation to help them. This is mostly because Regalias like Yukine did not experience a full human life, and because they've died from an accident, killing them at a young state. This low tolerance usually causes those around him to become upset. Yato also appears very materialistic when it comes to money, when Hiyori mentions her job request he claims he'll definitely do it because he intends to keep her money and holds his bottle full of coins. Yato will often indulge in fantasies of himself being a very successful god with more followers than any other god and lots of shrine maidens at his fingertips. Despite his aloof and often idiotic personality, Yato is a god that is seen to be quite wise and very serious when the situations requires it.

It is shown that in the past, when he was more like a god of calamity (Magatsukami) than he is now, he seems to have a much more serious, merciless and cruel personality. However, his personality changed for the better through Sakura's influence. He also used to be much stronger in the past, according to Rabō. In Chapter 40, Fujisaki Kouto revealed that Yato is a "God of Depravity," meaning that Yato only knows how to steal and not to give, and that those people around him will suffer terribly.

Yato has expressed in Chapter 52 that his greatest wish is to simply be besides Yukine and Hiyori but understands that his Father will do whatever he can to prevent that. This shows that Yato's true desire may not simply be in being remembered and a God of Fortune but also to be with the ones he loves and to make them happy. In fact, he does show a great loyalty towards those he loves and cares for. He was angered when Hiyori was kidnapped and believed Bishamon to be behind it, to the point where he challenged her and was devastated when Yukine sacrificed himself to save Yato from Bishamon (though Yukine survived and became a hafuri vessel because of his sacrifice). He also cried when Ebisu, who acknowledged him as a God capable of making others happy, died and reincarnated and apologized sincerely to the reincarnated Ebisu, despite Ebisu saying he did nothing wrong. In fact, he cares so much for Yukine and Hiyori that he refused to tell them about his past and more about himself, including his real name, for fear that if he did they would hate and abandon him, especially since he is a god that is easily forgotten by others and, as Father has stated, has always been abandoned because he is a God of Calamity. This caused some strain on his relationship with Yukine since Yukine at times felt inferior to Nora, though Yato alleviates these fears when he releases Nora and tells Yukine to be his guidepost and light the way for him.

Yato is quite the daydreamer 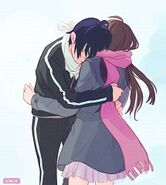 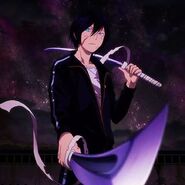 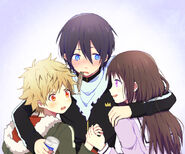 Add a photo to this gallery
Retrieved from "https://hero.fandom.com/wiki/Yato?oldid=1938019"
Community content is available under CC-BY-SA unless otherwise noted.