Unlike the other Toads in the game (with the exception being Blue Toad), Yellow Toad is shown to be an extremely noble character as seen in the intro of New Super Mario Bros. Wii where he ran right after the Mario Bros. to help them on their quest to save Princess Peach. He showes no fear facing Bowsers army with Ease and going though lava to save peach

Yellow Toad returns as a playable character within the multiplayer mode of the expansion pack game New Super Luigi U. Very much like in New Super Mario Bros. U, Yellow Toad journeys through the Mushroom Kingdom to save Princess Peach once again along with the help of Luigi, Blue Toad, and Nabbit.

Yellow Toad makes a reappearance by appearing as a host of Party and Solo Mode in Mario Party 9. During the introduction sequence, Yellow Toad is seen sitting alongside his friends as they gaze out to watch the numerous stars in the night sky. However, their stargazing is soon disturbed as Bowser starts to capture Mini Stars from the sky by using a powerful machine. Sensing the danger, Yellow Toad follows alongside the cast of the playable characters as they venture on to stop Bowser's plans.

Yellow Toad's role in the game consists him of being the main host for the boards (as well as being the host throughout the story mode). Throughout the boards, Yellow Toad often assists the player by providing tips and as well as general controls for events such as the minigames. Yellow Toad also announces the winners of the various modes and gives out various rewards to the players based on their scores.

Yellow Toad also maintains the Museum option in which the player can see the various features he or she unlocked throughout the game. In the mode High Rollers of the Minigame Mode, Yellow Toad makes a cameo appearance alongside Blue Toad and Green Toad in the hot-air balloon that Blue Toad (who hosts the Minigame Mode) brings to pick up and congratulate the player who gained victory in the mode.

Yellow Toad returns in Mario Party: Island Tour, once again playing the role of host of the boards. He hosts all boards except Bowser's Peculiar Peak, in which that one is hosted by Bowser.

Yellow Toad reappears once again in Mario Party 10. This time, instead of being the host, Yellow Toad appears close to the Mini Star and waves to the players with Green Toad. In Bowser Party mode, Yellow Toad is being held prisoner of the fortress and needs the players to rescue him.

Throughout the game, Yellow Toad is shown to be able to perform several moves that the Mario Bros. have used in the past such as the Ground Pound, Spin Jump and Wall Jump. Yellow Toad is also rather strong despite his size; being able to pick up, carry, and even throw items much larger than himself such as barrels. He is also capable of carrying other characters such as the Mario Bros. with ease at any point in the game. He is also revealed to be skilled in riding Yoshis, being able to control them as effectively as the Mario Bros.. His balanced stats are present so as not to give players advantages over each other.

He is also able to use all of the available power ups in New Super Mario Bros. Wii, including the new Propeller Mushroom, the Penguin Suit and the Ice Flower. Upon using them, he is able to gain a special ability from the items (such as throwing fireballs when using the Fire Flower). All of these power ups make Yellow Toad's coloration change to his preferred choice of color, yellow.

In New Super Mario Bros. U, Yellow Toad is given a new power-up ability in the form of the Flying Squirrel Power-Up. Upon gaining the effects of the Super Acorn, Yellow Toad (much like his comrades) can use his new form to glide through the air and latch onto walls. 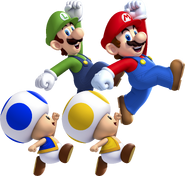 Retrieved from "https://hero.fandom.com/wiki/Yellow_Toad?oldid=2220263"
Community content is available under CC-BY-SA unless otherwise noted.