Performing magic, teaching his apprentice Mickey all he knows

To teach Mickey Mouse all he knows about magic

He is the owner of the Magic hat that Mickey borrows, and plays with its magic but loses control, and Yen Sid has to fix the problem and teach his apprentice a lesson. After Fantasia, he doesn't really appear in anything else, except in The Sorcerer's Apprentice, re-appearing in Fantasia 2000 and a few cameos in the House of Mouse, a supporting role in the Kingdom Hearts series, and in the game Epic Mickey.

He is voiced by Corey Burton.

Master Yen Sid is a rather severe-looking old man with long, grey hair, bushy eyebrows, and a long, grey beard that parts down the middle. He wears the famous, conical sorcerer's hat on his head. The hat is blue and decorated with several yellow stars and a yellow crescent moon. Fantasia shows that the top of Yen Sid's head is bald under the hat, though he never removes it in the Kingdom Hearts series.

He wears long, billowing blue robes with sky blue lining. The insides of his robes are dark red. The whites of his eyes are quite large in comparison to his small pupils, something that is further highlighted by the fact that his eyes are often wide open. In Kingdom Hearts Birth By Sleep, there are very small changes to the sorcerer's robes, such as the sky blue lining becoming thicker and the robes themselves being a bit wider.

While little is known about his life as a Keyblade master, the elderly sorcerer is shown to be a rather stern man. In almost every instance, he is shown to be frowning. But beneath his harsh exterior belies a man who strongly believes in his apprentices no matter how much mischief they may get up to, demonstrated by when he expresses annoyance at Mickey for running off with the Star Shard and recklessly getting lost with it, but then forgives Mickey and awards him the title of Master with an encouraging smile.

Given his past status as a Keyblade master, he is shown to have great knowledge about the properties of the Heart, the Heartless, the Nobodies and the Unversed. It is he who explains the nature of the Nobodies to Sora, Donald and Goofy, and also tells them that as long as darkness exists in one heart, the Heartless will never cease to exist. So powerful and wise he is, that even Terra, Aqua, and Ventus speak to him with utmost respect, despite him not being their master. However, Mickey merely refers to him as "Yen Sid" without calling him "Master", possibly because Mickey, like Master Eraqus before him, is also a Keyblade Master.

Master Yen Sid is a master of the magical arts, able to perform powerful magic spells comparable to Merlin's. He has shown the ability to teleport, create illusions while training Mickey, and create cosmic smoke to locate a person. He seeks counsel with the stars to predict the conditions of the present and the future, which allows him to gather information about the worlds' condition and to pass it on to his allies.

As a retired Keyblade Master, he presumably still retains the power to use the Keyblade, but never used it since he had taken his leave. 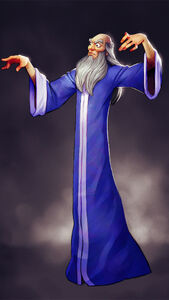 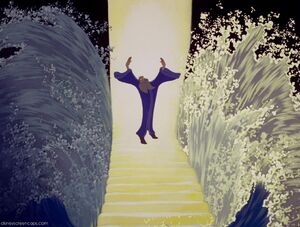 Retrieved from "https://hero.fandom.com/wiki/Yen_Sid?oldid=2131384"
Community content is available under CC-BY-SA unless otherwise noted.