Member of the Lodge of Sorceresses

Yennefer of Vengerberg is the tritagonist of the Witcher franchise. Appearing as the tritagonist of the Novels, the overall tritagonist of the games and as one of the three main protagonists (alongside Ciri and Geralt) of the 2019 Netflix adaptation. She is a sorceress who lived in Vengerberg, the capital city of Aedim, the long-time lover of Geralt of Rivia and the adopted mother of Ciri. Yennefer was a former royal advisor to king Demavend of Aedirn, a close friend of Triss Merigold, and the youngest member of the Supreme Council of Sorcerers within the Brotherhood of Sorcerers. After its fall, the Lodge of Sorceresses attempted to recruit her, but they didn't see eye to eye as the Lodge wanted to advance their own political agenda by using Ciri.

She is voiced by Denise Gough.

Born in 1173, Yennefer had a rough childhood from the moment she was born, having been born a hunchback. Her father immediately detested her due to this deformity and blamed Yennefer's mother for it, claiming it was through her side, with mages and elven blood, not to mention her having had an abortion before, that caused the deformity. Her mother initially tried to protect Yennefer, believing it was by the will of the gods, but her father still struck Yennefer until one day he left them both for someone else. After this, her mother, upset that her husband had left, also began to beat her own daughter.

During the Battle of Sodden Hill she was blinded by Fringilla Vigo, a Nilfgaardian sorceress. Her sight was later magically restored but she still bore the emotional scars.

Like most sorceresses, Yennefer is sterile. She secretly sought a way of restoring her fertility. She gave her motherly love to Ciri - the child destined for Geralt by the Law of Surprise - teaching her about magic while in Ellander, at the Temple of Melitele under the watchful eye of Nenneke.

The lady of Vengerberg was famous for her beauty, even though she was nearly a century old. Yennefer had locks of curly, raven black hair fragrant with lilac and gooseberry perfume, falling in a cascade of curls on her shapely shoulders. Her face was very pale, triangular in shape with a slightly receded chin. Her eyes were cold and sparkling with a remarkable violet penetrating gaze, in anger blazing with livid, blue-gray fire. Those very eyes also concealed wisdom and imperiousness. Yennefer's nose was slightly long, mouth was pale with thin and slightly crooked, soft, sweet with lipstick, proud lips. On her long and slender neck hung a black marigold with a star made of obsidian sparkling with a multitude of tiny diamonds embedded in it.

Yen had pronounced cheekbones, natural, slightly irregular eyebrows trimmed by hand and emphasized with charcoal, long eyelashes, and petite hands. Even in high-heeled shoes she wasn't tall, was beautiful but threatening, having incredibly thin and slender waist and slender legs.

She always dressed in black and white, at times wore stockings, wore frilled underwear but never wore trivialities with underwire, she didn't need to. Her voice was resonant and mildly derisive. Her overall feminine shape was one of a twenty-year-old girl and she moved with a natural, unforced grace. She was a quadroon (meaning she had a quarter elven blood, in her case on her mother's side).

It is implied that her attractive looks were a product of magic and had been acquired during her training, as with most other sorceresses. Geralt notes how her shoulders are slightly lopsided and by the end of the story realizes that Yennefer used to be a hunchback. Nevertheless, his love for her does not diminish. 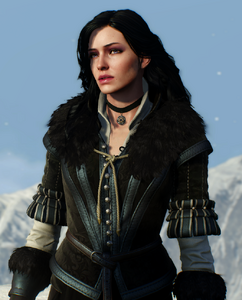 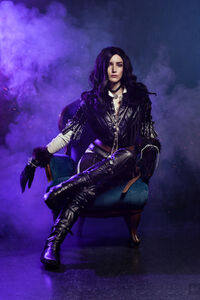 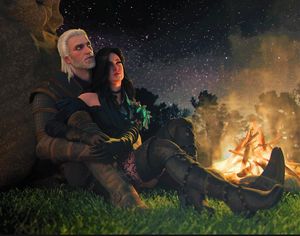 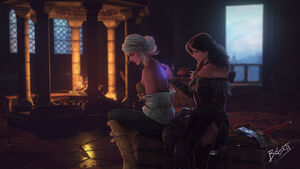 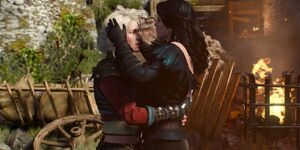 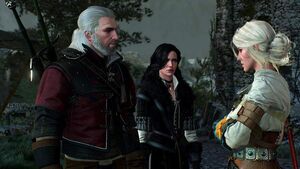 Add a photo to this gallery
Retrieved from "https://hero.fandom.com/wiki/Yennefer_of_Vengerberg?oldid=2030840"
Community content is available under CC-BY-SA unless otherwise noted.