Protect and save Everest from poachers. (succeeded)

Yi is the main protagonist of the 2019 Dreamworks film Abominable. She is a young Chinese girl who lives with her parents and a yeti named Everest.

She is voiced by Chloe Bennet, who also plays Daisy "Skye" Johnson on Agents of S.H.I.E.L.D.

Yi is a teenage girl living in Shanghai with her mother and stern grandmother. Since the loss of her father, she likes to go into her fort and play her violin, which is all that remains of him, vowing to keep her promise to him that she will go traveling.

One night, Yi notices a yeti on her rooftop. The yeti, whom she names Everest, is on the run from the ruthless Dr. Zara, a mad scientist and poacher who itends to sell Everest to the highest bidder.

Now, it's up to Yi, aided by her friends Ping and Jin, to help Everest find his way home.

Yi playing on her dad's violin.

Yi with her grandmother. 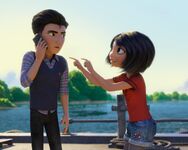 Retrieved from "https://hero.fandom.com/wiki/Yi?oldid=1729802"
Community content is available under CC-BY-SA unless otherwise noted.