Being with her family.
Protecting Ta Lo (formerly).

Ying Li (應麗) is the posthumous protagonist of the 2021 Marvel Cinematic Universe film, Shang-Chi and the Legend of the Ten Rings.

She is the sister to Ying Nan, and both were tasked by the Great Protector to protect the Ta Lo from intruders, and fell in love with the warlord Xu Wenwu. She would leave the dimension to be with Wenwu and their children Shang-Chi and Xu Xialing, but was later killed by the Iron Gang. Her death would greatly affect Wenwu and her children, with the former being tricked by the Dweller-In-Darkness that he could bring his wife back if he liberated the dark gates.

She was portrayed by Fala Chen.

Ying Li was born in Ta Lo's village to unnamed parents, and lived in the dimension alongside her sister Ying Nan and a Dijiang named Morris. At some point in their adulthood, Li and Nan were tasked by the Great Protector to become the guardians of Ta Lo to prevent intruders from attacking the village, or releasing the Dweller-In-Darkness. The two received training in martial arts, and were empowered by the Great Protector with enhanced abilities and the ability to manipulate air.

In the late 1990s, Li continued to protect the entrance of Ta Lo, and did so when the Ten Rings arrived to conqueror the dimension and expand their power. She encountered their leader Xu Wenwu after his men were stopped by the bamboo maze, and proceeded to fight and defeat the warlord despite the latter wielding his rings. After their battle, Wenwu developed a romantic interest with Li, and started to spend time with her to receive better training. She returned his affections, helping him strive for power more peacefully and leave his conquest behind. Falling in love with him, Li asked the elders to allow him to enter Ta Lo, but they refused since he as an outsider. She then decided to leave Ta Lo behind to be with Wenwu on Earth, thus losing her powers and leaving her sister Nan to guard the dimension.

On Earth, Li married Wenwu and had two children named Xu Shang-Chi and Xu Xialing, and Wenwu abandoned his organization to be with his wife and raise their children. Li never regretted leaving Ta Lo since she found love, and would tell her children of stories of her dimension while gifting them with pendants. One day while helping Shang-Chi, she saw the Iron Gang enter the Ten Rings headquarters, with their leading wanting to revenge on Xu Wenwu. Li managed to have her children get to safety, and proceeded to fight the Iron Gang until she was killed by their leader.

Wenwu and their children were devastated by her death, with the former believing that he had become too weak to protect his wife from rivals. He returned to his organization as a brutal leader, and placed Shang-Chi into ruthless training so he could assassinate the Iron Gang's leader. The Dweller-In-Darkness would sense Wenwu's grief, and manipulated his pain into making the warlord believe that Li could be brought back if he traveled to Ta Lo and destroy the dark gates. The Mandarin succeeded in destroying the gates, thus releasing Dweller and the soul eaters, but they were stopped by Shang-Chi and the Great Protector. 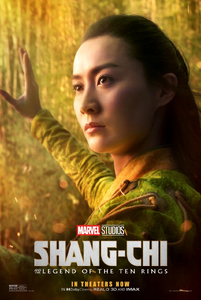 Ying Li with her son, Shang-Chi.