Ying Nan is a supporting character in the 2021 Marvel Cinematic Universe film, Shang Chi and the Legend of Ten Rings.

She is the sister to Ying Li and was tasked by the Great Protector to protect Ta Lo, a dimension that holds the Dweller-In-Darkness and the Soul Eaters. Nan would meet her nephew and niece when her brother-in-law Xu Wenwu wanted to enter Ta Lo to destroy the dark gates, and worked with them to stop him and later the Dweller and the Soul Eaters.

She was portrayed by Michelle Yeoh, who also played Wai Lin in Tomorrow Never Dies and Philippa Georgiou in Star Trek: Discovery, and also voiced Soothsayer in Kung Fu Panda.

Ying Nan was born in the village of Ta Lo, and along with her sister Ying Li, underwent training to become the guardians of the dimension to prevent intruders to invade or awake the Soul Eaters. Nan and Li separated from each other after the latter decided to leave Ta Lo to be with Xu Wenwu, as the elders of the dimension refused to allow an outsider to their home. Ying Nan later learned of Li's death by the Iron Gang, and was saddened by the lost of her sister.

Shang Chi and the Legend of the Ten Rings

Ying Nan and the villagers of Ta Lo witnessed Shang-Chi and Xialing arrive in the dimension, and welcomed them despite the others being weary of them. When her nephew and niece explained that Wenwu was planning to arrive to Ta Lo and break the gates since he believes that Li was behind them, Nan explained that the Dweller-In-Darkness was feeding Wenwu lies to escape from their prison. After explaining the Soul Eaters intentions, she trained Shang-Chi since Li was the only person who had defeated his father. While in front of the village, Ying Nan attempted to reason with Wenwu, but he refused to listen, which caused the battle to commence. Ying Nan battled her opponents until the dark gates was destroyed, which allowed Dweller and the Soul Eaters to escape and feed on anything they encountered.

Working with the Ten Rings to fight against the Soul Eaters, she witnessed her nephew come from the lake riding the Great Protector. She then tasked him with stopping his father, as she and the others continued to fight the Soul Eaters in the village. After the Dweller-In-Darkness was defeated, Ying Nan held a memorial to honor those who had fallen during the battle. 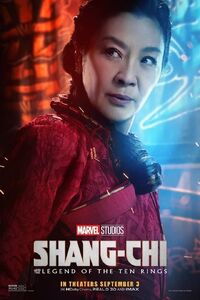