Hanging out with Historia.

To save her fellow cult followers (failed).


To bring Historia Reiss to Marley in order to gain a pardon and live there safely with her (abandoned).
To marry Historia (failed).
To survive the war and poverty (failed).
To stay within the Walls with Historia (formerly, but left Historia behind).
To go back to Marley and return the Jaw Titan power (succeeded)

She is usually seen with Historia Reiss (formerly known by her fake name Christa Lenz) who is her love interest. She inherited the power of the Jaw Titan from Marcel Galliard. Ymir was named after Ymir Fritz by a scammer to present her as a member of the Fritz family to an Eldian cult in Marley. Ymir was actually a fraud, as she had no royal blood and she was only a homeless Eldian little girl taken from the streets by the scammer. After being set free after sixty years of banishment in Paradis Island as a Pure Titan, she made her way to the Walls where she lived as a hobo and petty criminal, until she joined the 104th Cadet Corps two years after the Fall of Wall Maria.

Many years ago, an orphan Eldian little girl who lived as a beggar was found by a unknown man in the streets of a city in Marley. He gave her the name "Ymir", a bed, food and a fancy dress. Because of her name, many adults start to kneel and worship her. She felt so happy to give them happiness and kept her role as "Ymir". Several years later, the people of Marley discovered the existence of Ymir's cult and started calling her a devil, and even the man who had given her name claimed that he had been deceived by her. However, she still tried to keep her role and tried to save the people who did worship her, but she was not successful. She was hated by the people in the city that threw rocks on her. The girl and her worshippers were all arrested by Marley's Public Security and condemned to deportation to the penal colony "Heaven", in Paradis Island. Ymir and her people were injected with the Titan serum by the Marleyan soldiers, and transformed into mindless titans to be banished to Paradis.

60 years later, still as a Pure Titan, she encountered the young Warriors Marcel Galliard, Reiner Braun, Bertolt Hoover, and Annie Leonhart. When she ate Marcel, she transformed back into a human, obtaining the power of the Jaw Titan. After she opened her eyes, she finally felt free of being a mindless Titan for many years. She then travelled to the Walls and began a new life within Wall Sheena, somehow managing to smuggle herself within its lands. She survived begging and stealing food or money, and spying on the Eldians of Paradis for two years. It was during this time that she overheard conversation between priests of the Church of the Walls, and learned that a girl who was an illegitimate child from a nobleman's mistress was given a false name and was forced to join the Cadet Corps. This girl would later reveal herself to be Historia Reiss. Ymir's interest in Historia led her to enlist in the Cadets to search for her.

Ymir was initially a selfish, cynical, exploitative, confrontational, argumentative, and uncooperative girl. She very often criticized people for being untrue to themselves, as when she berated Sasha Braus, who developed an extremely polite and formal way of speaking to hide her native accent. However, sometime later she reveals a kinder side, especially towards Christa. She also harshly criticized Armin Arlert's flaws, deeming him incompetent and going as far as stating how unfair it was that he was the sole survivor of his squad after a Titan ambush in the Battle of Trost District.

By her own admission, Ymir's greatest fear was actually dying. This turned out to be a lie, and she eventually chooses to return with Reiner and Bertolt to their homeland, so they wouldn't leave empty-handed. Having failed to deliver both Eren and Historia, Reiner and Bertolt received an ultimatum by the Marley government but Ymir payed with her life.

As the story progress, it is revealed that she is actually brave, selfless, and quite emotional. This is shown when Ymir accepts Reiner and Bertolt's offer to return to their hometown in exchange for a pardon. She also has shown regret over eating Marcel (even though she had no control over herself during her time as a mindless Titan and has no memory of the event). But she states that she is very thankful to them, because their presence allowed her to be released from her Titan form, which she deemed as an endless nightmare.

Ymir is in love with Christa/Historia and is very protective of her. She openly expresses her feelings when she promises Christa that they will marry after the war. During the Female Titan arc',' she worries about Christa and asks Bertolt where she is. Later, before she leaves to save Bertolt from the Pure Titans, she apologizes to her and gently caresses her head while in her Titan form. As a prisoner of the Marleyans, Ymir writes a love letter to her, revealing all her tragic backstory, telling that she will probably die soon and once again apologizing that she didn't marry her.

Although she hated the government of Marley, Ymir was actually neutral in the war between Marley and Paradis. She called Eren childish and was the only potential ally of the Survey Corps who opposed to kill Reiner and Bertolt, calling the two of them "small fry". She decided to help them against Mikasa and the others, even tried to convince Historia to go to their hometown together. This because Ymir knows the unfortunate position of the Warriors as Eldian pawns. She already guessed that the destruction of the Walls had been planned by the Marley's power. And also knowing about the short lifespan of a Titan shifter and how horribly Eldians are treated in Marley, she felt sorry for her 2 kidnappers. She had to chose between staying with her beloved Historia or following Bertolt and Reiner to avoid them to suffer punishment for returning home empty-handed. However, she decided to let Historia stay in Paradis, much to Bertolt's anger at first, only to find out that Eren had the Coordinate power after all, thus making the kidnapping of Historia pointless and Eren the only target.

She sacrificed herself by following Reiner and Bertolt back to Marley where she was eaten by Galliard, Marcel's younger brother, in order to give him the power of Jaws Titan. She felt that she owed Marcel's life and power to his Warrior friends and brother. Bertolt and Galliard were both sorry for her unfortunate position as an Eldian and Galliard had no hatred towards her, knowing that it was beyond the control of a normal Titan to avoid eating people. Galliard thanked her for giving back his brother's Titan.

Along with Grisha, Bertolt, Eren Kruger, the Galliard brothers and Tom Ksaver, Ymir is one of the deceased Titan shifters that Zeke Yeager manages to free from Eren's control, allowing them to fend off the army of Titan shifters of the past while the Warriors and Survey Corps destroy Eren's main Founding Titan body. 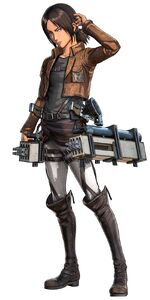 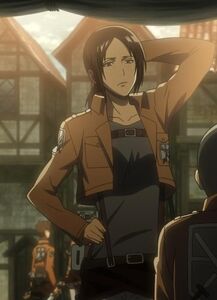 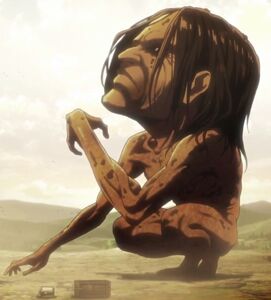 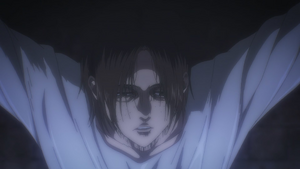 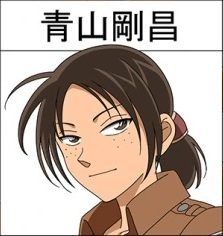