Prevent Moses from being killed by Seti's soldiers (succeeded).

Yocheved is a minor character in the 1998 Dreamworks animated film, The Prince of Egypt. Like her Biblical counterpart, she is the mother of Moses, Miriam, and Aaron.

She is voiced by the late Ofra Haza, who also sang her part in 17 languages, including her native language, Hebrew. Because of Ofra's beauty, she was also Yocheved's model.

After Pharaoh Seti I worries that the Hebrews will overpopulate and rebel against the Egyptians, he orders his soldiers to take all the newborn Hebrew boys and drown them in the river Nile.

Not wanting her own newborn son to suffer the same fate, Yocheved along with her older children Miriam and Aaron takes him to the river Nile and places him in a basket and sends him down the river to safety. As she does this, Yocheved sings her baby a lullaby.

Yocheved presumbly dies sometime after this. She is later mentioned many years later by a now adult Miriam when she and Aaron reunite with their brother, who had been taken in by Seti and his wife, Tuya and named Moses. Miriam tells Moses that Yocheved had saved his life. When Moses is reluctant to believe Miriam, she sings the same lullaby that Yocheved had sung to Moses as she sent him down the river.

She was briefly seen as a wall depiction in Moses’s vision/dream, in which it relives the story of the Hebrew genocide. Moses apparently finally recognized his mother, and his dream-self cried upon realizing of his true heritage and the sacrifice Yocheved committed to keep him safe. 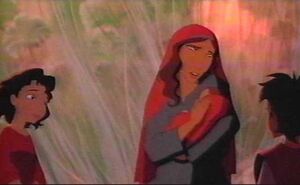 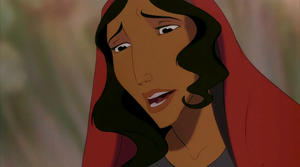 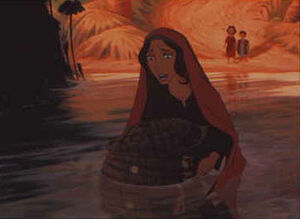 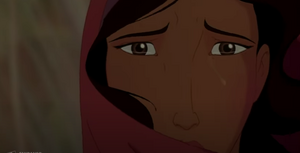