Young Psychic
Yoichi Asakawa (浅川 陽一, Asakawa Yōichi) (Sometimes called Yoichi Takayama) is a character of the 1998 film adaptation of Koji Suzuki's novel Ring, published in 1991, portrayed by Rikiya Otaka. He is based on the novel character Yoko Asakawa, daughter of Kazuyuki Asakawa. He also appears in the "official" sequel to the Ring Trilogy, named Ring 2. He is the son of Reiko Asakawa and Ryuji Takayama, is about seven years of age and like his parents (particularly his father) has supernatural powers, namely ESP. He, like Sadako, has been considered a monster due to his strange powers and mysterious personality.

Yoichi Asakawa, born 1990, is the seven-year-old son of Reiko Asakawa and Ryuji Takayama. He lives with his mother in a small flat in Tokyo. His parents divorced when he was young (four-years-old, it is suggested), and he has very little contact with his father, if any. He was very close to his cousin, Tomoko Oishi (whom he and his mother call "Tomo-chan"). She was the daughter of his mother's elder sister, Yoshimi, and Yoichi was very negatively affected by her death.

Yoichi is very independent and quiet for a boy of his age. Without a male role-model, he has made himself "man of the house", and takes it in his stride to help look after his mother. He tries to support her by helping her; he lays out a change of clothes for her when she comes home from work, walks to school alone and prepares his own dinner. The only person he seems to have a close relationship with is his maternal grandfather, Koichi Asakawa, with whom he acts like a normal seven-year-old.

Yoichi is very similar to his father in looks, behaviour and feelings; both are aloof and suppress their feelings. Despite their estrangement, they appear to have a special connection, in which they can sense when they are both in danger. He clearly loves both his parents, as demonstrated in Ring 2, but his relationship to both of them is also on a supernatural level. He is able to see his cousin, Tomoko, who tells him to watch the cursed videotape that his parents are investigating.

After Yoichi watches the videotape, his parents begin to push themselves harder to try to find a way to save themselves. They leave Yoichi with his grandfather and learn more about the video. They discover its origin and its creator, Sadako Yamamura. Upon finding her body and laying it to rest, Reiko does not die and they believe she is saved.

Following the events they have been through, a reconciliation between Yoichi's parents seems likely, as Reiko and Ryuji appear ready to try again at being a family. However, the hope amounts to nothing as Ryuji dies the next day at his deadline. Reiko realizes (with the help of Ryuji's spirit) that the way to save yourself is to copy the tape and show it to someone else. She travels to her father's house and Yoichi does the same thing as his mother did, giving his grandfather the tape.

Yoichi, like his parents, is clairvoyant and seems to each have a certain amount of ESP. Ryuji and Reiko have both demonstrated signs that they can sense spirits when they are in the same room. The three are connected on a supernatural level; if one is in danger the other two family members know it.

Yoichi sees and feels his dead cousin Tomoko's presence in her old bedroom and, like Ryuji, he appears to receive a headache upon entering places where spirits are present. This leads him to watching the videotape like his parents when Tomoko's spirit tells him to do so. Ryuji felt Yoichi's danger when he watched the video and sent out a warning. Upon his father's death, Yoichi appears to feel the loss of his father's aura.

Yoichi takes a more direct role in the plot to the sequel. Following his father's death he is rendered unable to speak. He takes to hiding in public places near where his father lived, leading to Mai Takano finding where he and Reiko are hiding. He begins to develop supernatural powers beyond those he had in the original film that take a less realistic effect.

Yoichi recovers his speech once he realizes the police are trying to take him away from his mother, subsequently leading to Reiko's death when she enters one of her visions from which she never awakens as she is hit by a truck. After this Yoichi begins to lose control of his powers from the hate he has for the circumstances that led to his parents' deaths.

At the Yamamura Inn Yoichi causes a huge paranormal disturbance in which Shizuko and Sadako appear. Yoichi is used a medium to summoned Sadako as he is judged the only one strong enough to do it. He refuses to cooperate with Dr. Kawajiri at first and is only coaxed into using his power when Mai is blamed for his mother's death, provoking his hate. He loses control of his power as a result and causes the death of three people.

Yoichi transports Mai and himself to the well and tells her leave to let him fall. However Ryuji recovers Yoichi from the bottom of the well and takes his hate, preventing him from becoming like Sadako.

Although the reasons for Ryuji and Reiko's divorce are never explained, Yoichi and Ryuji appear to hold a close supernatural bond despite having little contact with each other. He resembles Ryuji not only in clairvoyance but also personality and even mathematic ability. Ryuji also seems to feel the need to look out for Yoichi; during the first film he asks after him to Reiko and asks if he will be okay being left alone late, to which Reiko replies sadly, "He's used to it."

In Ring 2 Ryuji's death, and then Reiko's, leads Yoichi's powers to become more sinister and like Sadako's. It is Ryuji who saves Yoichi when he tries to kill himself and takes his hate away, saving him from Sadako's influence.

In Rasen the relationship is slightly more complex. Takano tells Andou that Ryuji did not want Yoichi or Reiko to die although he always regretted having a child. Ryuji does not desire to bring Yoichi back to life through Sadako as Andou does with his son, stating that he "couldn't be so cruel" to bring Yoichi back into this world. This suggests that he has foreseen the destruction Sadako will bring and feels it is better that Reiko and Yoichi are dead.

Yoichi seems to have a normal relationship with his mother Reiko. He supports her by helping her as demonstrated in Ring. Yoichi is badly affected by her death in Ring 2, seeing as how his father Ryuji had already died, Reiko was all he had left. He loses control of his powers after she dies, but it is revealed that her spirit is still watching over him.

Yoichi Asakawa is the movie version of Yoko Asakawa from the novels. However, the novel character is a baby, and does not participate in the plot of the book, except having watched the videotape, when her mother Shizuka Asakawa plays it and watches it.

In the Korean film adaptation, The Ring Virus, Hong Booram, is the daughter of single-mother Sun-Joo Hong. In fact, she appears to be about the same age as Yoichi, but other than having watched the videotape, does not participate in the plot.

In the American film adaptations, Aidan Keller(David Dorfman), is the son of single-mother Rachel Keller, and has psychic powers, and participates in the plot, similar to Yoichi. 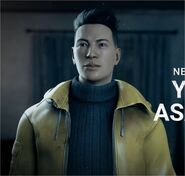 Yoichi as an adult in Dead by Daylight 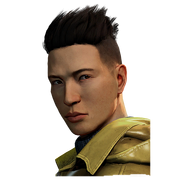