All For One's Brother

Bearer of One For All

First One For All User

Defeat All For One and his allies (posthumously ongoing).

Ensure the legacy of One For All lives on (succeeded).

All For One (older brother)
Tomura Shigaraki (adopted nephew)

Frail Predecessor
Yoichi Shigaraki is the posthumous overarching protagonist of the 2014 superhero manga series My Hero Academia and its anime adaptation of the same name, and is a cameo character in the 2019 anime film My Hero Academia: Heroes Rising.

Shigaraki was the frail younger brother of the quirk-stealing archcriminal All For One. Although they loved each other, Yoichi had a strong sense of justice and admonished his brother's evil ways. All For One, in an attempt to make Yoichi more powerful as well as join his side, gave him a quirk that would allow him to stockpile power.

Yoichi's own quirk that allowed him to pass on his quirk to another fused with the stockpiling quirk, creating a quirk called "One For All" that could be passed onto others and grew in power with each generation. Rather than joining his brother, Shigaraki gave One For All to another person, hoping that one day it would amass enough power to take down All For One.

Over a century later Yoichi, long dead by that point, began communing with the ninth user of One For All Izuku Midoriya. He told Midoriya the untold history of One For All as well as the history of All For One who was still operating Japan's criminal element from behind-the-scenes.

Yoichi is voiced by Sōichirō Hoshi in the Japanese version of the anime and by Stephen Fu in the English version.

Yoichi is mostly seen to have a strong sense of justice and righteousness, despite the given weak condition he has. Despite to not have stop his brother All for One from committing his atrocities, he still continues to oppose his brother's megalomania and desires, even as well as refusing to join his "cause" of influence and ruling.

Apart from this, he is quite friendly and does wish for the better into stopping his brother at all costs, even when he is now apart of his transferred Quirk throughout the legacy of One for All. 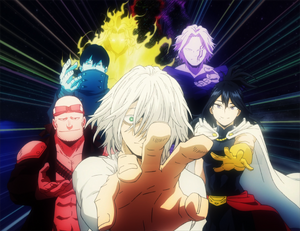