Yoko Littner is the main female protagonist of the anime series Tengen Toppa Gurren Lagann, serving as the tritagonist of the first arc of the series and the deuteragonist of the last two. She is one of the founding members of Team Dai-Gurren, along with Simon and Kamina. Instead of piloting a Gunman, she prefers to fight using her sniper rifle and is an excellent shot. She goes along with Simon and Kamina in their campaign against the Beastmen and later works with the former to stop the Anti-Spiral.

She is voiced by Marina Inoue in the Japanese version and Michelle Ruff in the English version, the latter of whom also voices Rukia Kuchiki, Sakuya Tachibana and Anri Sonohara.

Yoko has red hair, amber eyes, a large bust and an extremely curvy figure that was present even from a young age.

In the first season, she occasionally had lightly tanned skin due to spending most of her time outdoors in the sun and commonly wore a leather black and red flame-designed bikini top with black rubber-leather short-shorts, and a white studded belt. Below, Yoko wore baby pink thigh-high socks and white mid-calf zip-up boots designed with red flames emerging from her grey soles. She also wore black open-knuckled half-gloves complete with round wrist pieces studded with spherical yellow studs. Around her neck, Yoko wore a tall white and pink patterned scarf with thin red stripes in which she was shown to keep a magazine for her gun. In lieu of signature headwear, Yoko wore a white cracked skull hair accessory on the left side of her head as well two yellow chopsticks that kept her hair up, the latter of which also doubled as weapons.

Seven years after the fall of Tepplin, Yoko's physical features developed fully and the young, more round and almost cute-ish facial structure that she maintained as a young teenager matured fully into that of a woman's. In addition to her more defined, matured and primed facial features, the rest of her body had reached even higher levels of fitness and became even more bodacious than before.

At first, she wears an outfit similar to the former, however with the notable addition of a dark maroon jacket similar to style to what Simon wore, thigh-high variants of her old boots and no stockings.

After her official return as a Super Galaxy Dai-Gurren officer, she changes into an outfit made of entirely rubber-based agile material, customized with a mix of white, black and a pattern of red and yellow stars. Essentially a three piece outfit, the gear she wears sports a black tube top with large yellow-golden stars on the breasts, a white, highly stylized, two tailed cloak with red accents including a star in the front, and white form fitting leggings with a golden star on the outer legs, both above and below her knees. The leggings finish themselves off with connected red heels and a black Half Back thong piece.

Yoko is shown to be very mature and quite knowledgeable for her age. She is generally a very kind and caring person, but can be aggressive sometimes, particularly when dealing with Kamina. Yoko is a person who can handle most situations very well. She is also known be very good at fighting with her rifle and confident in her abilities. Despite her usual outfit consisting of little more than a bra and underwear, Yoko is actually a rather modest person, with Kittan and several others noting that her swimsuit actually covers less skin than her regular outfit. The reason she doesn't wear clothes very often is because they restrict her movements during combat.

Unlike Kamina, Yoko prefers to think things through before charging head-first into a battle, and is easily the most rational member of the group along with Rossiu and, initially, Simon. Yoko is also shown to be a very protective person, and cares deeply for her team mates and friends. Despite calling Kamina a man of unlimited stupidity, she found herself falling in love with him and was just as devastated by his death as Simon was, though due to her maturity she was able to cope with it better.

Initially, Yoko didn't think much of Simon, largely due to his lack of self-confidence. She couldn't understand Kamina's blind faith in him as she believes him not to be the fighting type due to his inability to cope under pressure. However, she later warms up to him and eventually forms a sisterly bond with him to help him cope with Kamina's death.

Yoko was horrified by Nia's (unintentionally) tactless and insensitive words about Kamina, namely that Simon can't rely on someone who isn't even around anymore. Even though Yoko acknowledged that no amount of crying would bring Kamina back, she still believed that they couldn't just forget about him like he was nothing. This incident caused Yoko to hold a grudge against Nia and develop a deep resentment towards her. Yoko is also shown to be a rather competitive person, as shown when she attempted (and failed miserably) to defeat Nia in a sport during their stay on the beach. Her opinion of Nia changed once the two worked together to take down Adiane the Elegant. This convinced Yoko to let go of her resentment of Nia and the two became friends.

After the defeat of Teppelin, Yoko remains generally the same, but with a new outlook on violence. Having seen friends die, Yoko believes that violence, mostly senseless, is terrible and should not be used with little children. She is also shown to dislike politics, judging by her decision to leave Kamina City and become a teacher on a remote island.

When Simon and Kamina attempted to defeat the Gunmen that appeared in their home, Yoko appears to offer then aid. Kamina remarks that "Surface girls are hot" and helps Yoko destroy the Gunmen though Kamina's ego makes the task much more difficult. She then decides to join the two and helps them by providing back up fire and support. She tries her best to help Kamina face Viral but when she sees Simon cowering in fear,she yells at him to help. This helps Simon muster the courage to help Kamina. Over the next few episodes, she helps Simon and Kamina in their battles and in Episode 7 gets worried when Kamina tries to defeat Thymilph's Dai-Gunzan. She stands against other Gunmen with just a revolver until Kittan and the others arrive.

In Episode 8, she reveals her feelings for Kamina, which he readily returns, and the two embrace and kiss. Simon accidentally witnesses the whole situation and runs off heartbroken. During the battle, Yoko saves Kamina from a sneak attack and provides support. When Kamina is killed, she, like Simon, takes it the hardest. When Simon meets Nia, she doesn't trust her at first (that's after she reveals she is Lord Genome's daughter). She is captured, along with most of Team Dai-Gurren. She attempts to escape and doubts getting out but sees Simon digging and remembers what Kamina said about Simon that he refused to be laughed at by Simon's back.

On the deck of the ship, she shoots at Guame, but his armor protects him.She watches Simon's speech and is in awe, while commenting that he needs some work. She gets uneasy of Nia while waiting for Dai-Gurren to be fixed. However when Adiane attacks, Yoko appears and shots her Gunmen square in the shoulder. Afterwards, she makes peace with Nia and admits to herself that she was stupid for distrusting her. From there, she helps Simon by piloting Gurren for Rossiu. She does her best but when Viral attacks, she opens her hatch to shoot which Viral then hits, causing her to be knocked out. Simon saves her and she watches him fight Viral one on one remarking that he can pilot alone. Cytomander however holds her hostage, but when the Dai-Gurren attacks, Simon saves her again. She then asks Simon if he knew that she loved Kamina, to which he smiled and said yes. From there on she helps Simon by advising him. She orders him to go on and defeat Lordgenome and helps by fighting against the Gunmen. 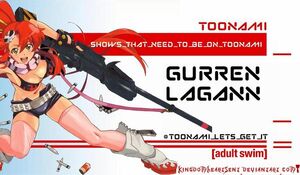 Yoko in Gurren Lagann on Toonami. 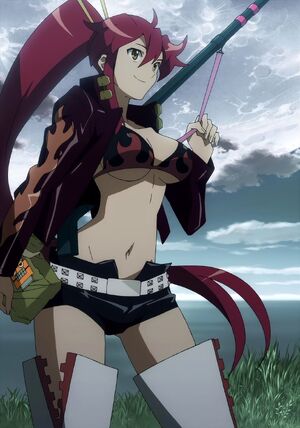 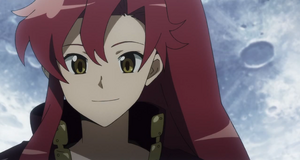 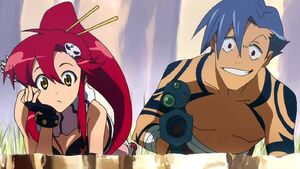 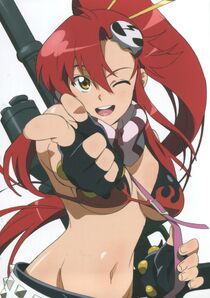 Retrieved from "https://hero.fandom.com/wiki/Yoko_Littner?oldid=1867621"
Community content is available under CC-BY-SA unless otherwise noted.