Yondu Udonta, or simply Yondu, is a fictional character appearing in American comic books published by Marvel Comics. The original version of the character is depicted as the last survivor of his species in the 31st century, and a founding member of the original Guardians of the Galaxy team from the Marvel Multiverse alternate reality known as Earth-691. A second Yondu was introduced later on a present day Earth-616, the main Marvel reality where he is the leader of a group of space pirates known as the Ravagers.

The Earth-691 Yondu is depicted as a blue skinned male with a large red fin protruding from the back of his head and back, a spiritual warrior who can control his arrows via sound waves, most commonly by whistling. Yondu joined Vance Astro and a number of survivors of the Badoon attack on Earth's solar system in the 31st Century to become known as the Guardians of the Galaxy. As part of the Guardians Yondu traveled to present day Earth and became an honorary member of the Avengers. The original Yondu never starred as a solo character in any Marvel Comic books but was a core member of the team in the Guardians of the Galaxy comic book that ran from 1990 to 1995.

Marvel Comics introduced a version of Yondu from Earth-616 where he is a space pirate leading a group of pirates known as "The Ravagers". Yondu character has appeared both in the Guardians of the Galaxy animated show as well as being a playable character in Disney Infinity: Marvel Super Heroes.

The Earth-691 version of Yondu first appeared in Marvel Super-Heroes #18 (January 1969), and was created by the late Stan Lee, Arnold Drake and Gene Colan.

Yondu appeared along with the rest of the original Guardians of the Galaxy team in the 2014 series Guardians 3000. Writer Dan Abnett described him as "the instinct" of the team.

The Earth-616 version of Yondu first appeared in Star-Lord #2 and was created by Sam Humphries and Javier Garron.

Yondu Udonta is a member of the Zatoan tribe, primitive beings native to Centauri IV. He functions as a hunter. His homeworld was the first planet to be colonized by humans that was outside Earth's solar system. Yondu is born in the late thirtieth century. Yondu's people had fled from contact with overwhelming Earth colonizers who had begun arriving in 2940 A.D.

In 3006 A.D., Vance Astro, an astronaut from Earth, lands on Yondu's planet with an antiquated propulsion ship. Despite realizing his mission was pointless, he performs the recon anyway. Vance encounters Yondu during the latter's trial of manhood. Yondu attacks him, but is repelled by Vance's powers. Vance keeps this secret as Yondu's action was illegal. Yondu works with Vance when the Badoon, an alien race, overtakes the planet later that year. All the other Centaurians are believed to have been slaughtered. Vance and Yondu escape in his ship to fetch help but the Badoon capture them easily. The duo are taken to Earth which, by 3007 A.D., has also been conquered. When questioned, Vance pretends to be unfriendly with Yondu, calling him a stupid creature. They later escape the attentions of Drang, the leader of the local Badoon forces, when Yondu changes the course of his arrow as Vance fires at him as part of an escape plan, pretending he wants to execute Yondu with his arrows, but Yondu gives a call that changes the course and distracts the Badoon. They team up with Charlie-27 of the Jupiter colony and Martinex of the Pluto colony when they come out of a telepod (whose appearance was caused by Starhawk) and form the Guardians of the Galaxy to fight the Badoon.

For the next seven years, the four survivors attacked the Badoon's outposts in the solar system. In 3014 A.D., the Guardians teamed with the time-traveling Thing, Captain America, and Sharon Carter to retake New York City from the Badoon forces. In 3015 A.D., the Guardians time-traveled to the 20th Century and met the Defenders. They returned to 3015 A.D. with the Defenders and later met Starhawk. After humanity defeated the Brotherhood of Badoon occupiers, the Sisterhood of Badoon arrived and removed the males from Earth.

Yondu and the Guardians later teamed with the time-traveling Thor, and battled Korvac and his Minions of Menace. Yondu traveled to the present alongside his fellow Guardians, and assisted the Avengers against Korvac. Some time later, in 3017 A.D., Yondu and the Guardians went on a quest to find the lost shield of Captain America. They battled Taserface and the Stark, and defeated the Stark.[9] Yondu's right hand was later destroyed by Interface, and replaced by Martinex with a bionic appendage. Martinex had offered to use their transmutative technology to make him a new hand from his own DNA but Yondu had refused, believing that he should accept the bionic hand as penance for his recent faithlessness and that Anthos was telling him to accept a new philosophy. Yondu would later leave the team when it is revealed that a small enclave of his people have survived on Centauri IV. These Kikaahe (“cave dwellers”) had escaped death at the hands of the Badoon because the walls of the cavern where they lived contained the mineral trillite (“yaka”) which blocks radio waves, thereby shielding them from sensors. Since his newfound people would not accept his bionic weapon-hand, Yondu allowed the Guardians to use their advanced medical technology to restore his flesh-and-blood hand, making his body whole once more. During their farewells, Vance apologizes for what he had thought was unacceptable treatment of Yondu during their earlier adventurers.

The Earth-616 version of Yondu has been identified by writer Sam Humphries as "the great, great, great, great, great, great, great grandfather of the Yondu in the original Guardians of the Galaxy and 'Guardians 3000'."[13] On this Earth, Yondu is the leader of the Ravagers, a group of Space Pirates. Yondu finds Peter Quill when his ship malfunctions and strands him on Earth. The Ravagers rescue him as Peter tries to steal his ship, managing to outsmart every member of the crew and capturing Yondu. After Yondu frees himself from his restraints and attacks Peter, he gives him a choice between letting himself be released into space without more trouble or execution. Peter instead asks him if he could join his crew. Yondu is initially skeptical of this idea, but after he learns Peter, like him, is a homeless orphan, Yondu allows him to stay on the ship with the Ravagers as their cleaning boy. Peter uses the opportunity to learn everything he can from space.

Yondu possesses no superhuman physical powers, but is a natural mystic, like his entire tribe. As a member of the marsupial alien race of the planet Centauri IV, Yondu possesses an intuitive mystical "sixth sense" perception that permits him limited empathic relationships with other lifeforms. The higher the lifeform, the more limited is his empathic potential. Additionally, Yondu possesses an intuitive and rather mystical rapport with nature, particularly with his own world, but also with any world that still possesses natural wildlife. With this rapport, he can sense incongruous elements (foreign bodies or substances) or focus on specific elements within the whole (such as the location of a given plant). He is also sensitive to mystical beings and forces and is able to detect their presence and activities without effort. By going into a trance, Yondu is able to replenish his own inner strength by communing with natural forces.

Yondu is an above average physical specimen of his race. He has slightly more strength and endurance than the average human male. As a hunter, Yondu is an expert in the use of bow and arrow. His ability to whistle with a range of four octaves aids his archery (see Weapons, below). The native Centaurian language is a system of grunts, clicks, and whistles, but Yondu has managed to master the English language, although it is painful for him to speak for too long without resting his throat. He is an excellent hand-to-hand combatant, and a highly skilled hunter and tracker. He has extensive knowledge of the social and religious customs of the natives of Centauri IV.

Yondu uses a 5-foot (1.5 m) single curve bow and a quiver of arrows composed of yaka, a special sound-sensitive metal found only on Centauri IV. A yaka arrow can actually change its direction (but not speed) in response to certain high-octave whistle-sounds some Centaurians can produce. It is not yet known precisely what pitch causes a yaka arrow to move in what way. Yondu is so skillful at controlling his arrows, he can cause an arrow to return to his hand or weave its way through a crowd of people without touching them. Yondu's arrows are 15 inches (38 cm) in length and are very flexible. He carries about 20 of them at one time. In Secret Wars (2015), Yondu utilizes his expertise in archery by shooting "drone-arrows" to give the Guardians an eye in the sky.

Yondu's right hand was replaced for a time by a bionic device called a weapons concealment appendage, a metal cup replacing his right hand Thus, he could no longer practice archery nor perform functions requiring him to grasp with his right hand. The device can release from within itself a number of weapons, including a mace, a hatchet, a scythe, a barbed spear, and others; when not in use the weapons are concealed within the appendage at a reduced sized, until enlarged by Pym particles. Later, after discovering that some of his people had survived on Centauri IV and realizing that they would not accept his bionic weapon-hand, Yondu asked the Guardians to use their advanced technology to transform it into a duplicate of his original hand, and they did so. 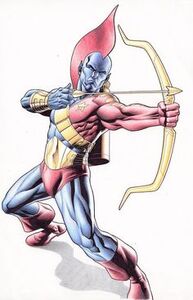 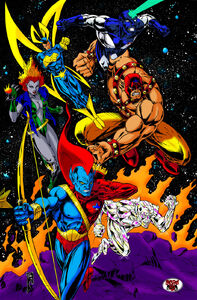 Retrieved from "https://hero.fandom.com/wiki/Yondu?oldid=1616091"
Community content is available under CC-BY-SA unless otherwise noted.