The Unforgotten
The Masked Assassin
Hunter

Teach Yasuo discipline (formerly)
Confront Yasuo in a duel to the death (failed, resulting in his death)
Learn the names of azakana and kill them
Free himself from his curse (both ongoing)

Yone, also known as The Unforgotten, is a heroic playable champion in the multiplayer online battle arena game League of Legends.

He is the older half-brother of Yasuo, who guided him and taught him discipline during his childhood. When Yasuo was accused of killing Elder Souma, Yone dueled against him in a battle to the death but was ultimately killed. Death was not the end for him, as he faced an azakana and was promptly cursed. Yone now travels across Runeterra to kill the azakana before they can cause harm, and recently reunited with his brother to give him knowledge about the azakana.

The 150th champion added to the game, Yone was released on August 6th, 2020. He is often played in the middle lane.

Yone was born in Ionia, where he and his half-brother Yasuo were inseparable. Yone was rational and wise, whereas Yasuo was arrogant and overconfident, so Yone taught the latter how to be humble. When Yasuo denied a request from Elder Souma after impressing him with his own wind techniques, Yone gave him a maple seed as a sign of humility, which caused Yasuo to accept the offer to be Souma's bodyguard.

One day, the forces of Noxus invaded Ionia. Yone and Souma's other students went to war to defend Ionia with their wind techniques, but Yasuo was told to stay behind and protect the elders. Yasuo grew impatient and snuck out to assist in the fight, but by the time he arrived the battlefield had been decimated by a deadly gas, with casualties on both sides. When Yasuo returned, Souma's students turned on him as he was guilty of not only dereliction, but also killing Elder Souma as a wind technique killed him, and Yasuo was the only one who remained by his side at that point.

Also believing the accusations, Yone held deep guilt towards himself for failing to teach Yasuo discipline and righteousness after killing Souma. He also blamed himself for the deaths of his classmates whom Yasuo had killed (in his own self-defense) so he believed he was just as responsible. The brothers eventually met and Yone confronted Yasuo, but the latter told him to turn back. They challenged each other in a duel to the death, but despite Yone's techniques, Yasuo eventually won and fatally wounded his brother. Yone asked Yasuo why he was running before taking his last breath.

When passing into he spirit realm, Yone's grudges remained. But suddenly, he came face to face with an azakana who was preying on his guilt and shame even before his death. Yone tried to fight the demon, but it overwhelmed him with magic. This caused him to be seized by rage and kill the azakana with its own blade, but this only caused it to curse him, binding his face to its mask so that it may one day consume him. On the other hand, the mask allowed Yone to remain in Runeterra and see the azakana invisible to mortal eyes. He discovered that the azakana can be defeated by learning their names, reducing them to inanimate masks. He realized that his conflict with Yasuo was nothing compared to the azakana, so he set out to pursue the truth and also find the name of the one who cursed him.

Kin of the Stained Blade

When Yasuo was attending a festival, a mysterious old man lured him to a lake and gave him a drink, which turned out to be poisoned. The elder revealed himself to be an azakana with the intent of preying on Yasuo's inner demons, but Yone appeared, recognizing his brother and telling him that he isn't after him this time. The two brothers fought at first, until Yone showed his signature crossed-sword pose, making Yasuo recognize him as well. They then fought the azakana together and defeated it. They parted on good terms, with Yasuo now aware of the azakana and fighting them alongside his new companion Ahri. 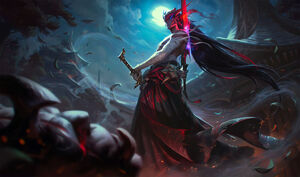 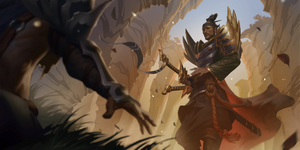 Yone, Windchaser before his death. 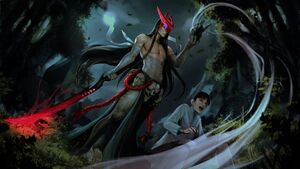