Feeding animals (as a child).

Travelling to see the world.

Legendary Hero from the Past

He is without a doubt the single most powerful character in the entire story and the Creator of the first Breathing Style. With the introduction of the Breathing Styles, the pace of Demon hunting began to accelerate, and giving demon slayers the power they so desperately needed to fight Demons on even terms.

With Yoriichi's Sun Breathing eventually deriving onto various forms of Breathing techniques, Demon slayers finally began to produce desirable results. No Demon slayer as an individual was or possible ever will be as powerful as Yoriichi before his birth, during his life, or since his death.

He is also the younger twin brother of Michikatsu Tsugikuni, who had a very complicated love-hate viewpoint of Yoriichi and later became Kokushibo, the Upper Rank One Demon to transcend death and attempt to surpass Yoriichi's incredible talent which can only be depicted as being blessed by gods.

He is voiced by Kazuhiko Inoue in the original Japanese, and by Mick Lauer in the English.

Yoriichi has slightly more slimmer bangs and wavier hair than his brother, colored black to red hair and burgundy in the anime, like Tanjiro Kamado. His demon slayer mark was at the same place at the top of his forehead, albeit lighter color.

Yoriichi wears a red haori with black hakama over an orange kimono and a katana worn on his hip. Many Demon Slayers are Conventional. He also wears the same Hanafuda Earrings created from his mother that Tanjuro Kamado wore, which are passed on to Tanjiro Kamado.

Yoriichi is the man of peace and of reverence. He was incredibly proud to see himself like any other human being and no one special. His brother still has the future and was optimistic, that given the overwhelming power of the Demon Slayer Corps of the First Breathing possessed, a generation would arise that would further exceed their own.

Demon Slayer Mark: Yoriichi is the progenitor of the Demon Slayer Mark, being born with it, possessing the tremendous physical abilities granted by its effects all throughout his lifespan. Unlike all other marks users in his era, Yoriichi was able to defy fate and lived to about 85 years of age. It is presently unknown why Yoriichi is immune to the Mark's effects, but it's presumably because he was the first one ever to have it and born with it naturally, unlike all other mark bearers who must train to attain it.

Selfless State: During their confrontation, Muzan noted that Yoriichi emanated absolutely no sense of drive, hatred, anger, fighting spirit, animosity or even bloodlust despite being in mid-battle against him, rendering it practically impossible for Muzan to detect him, predict his movements or gauge how powerful he was with his senses. This gave Yoriichi an edge in battle against Muzan as he underestimated his strength, a mistake that shook the Demon King to this day. 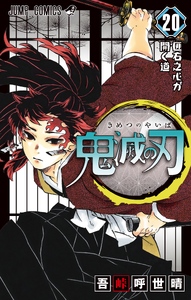 Yoriichi on the cover of the twentieth volume. 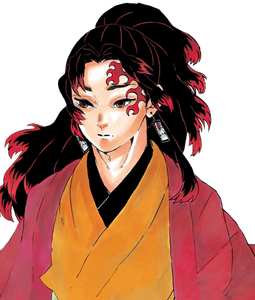 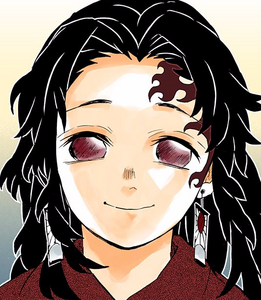 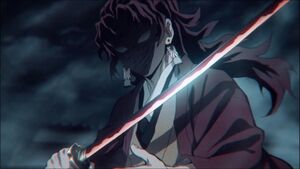 Yoriichi in a flashback as recalled by Muzan Kibutsuji. 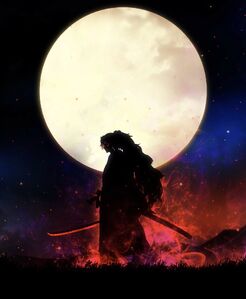 Yoriichi in front of the moon