Teasing Ichigo while seeing her naked.

Yoruichi Shihōin is a supporting character in the Bleach franchise. She is the former captain of the 2nd Division of the Gotei 13, as well as the former commander of the Onmitsukidō. Having abandoned her command of both positions, she works with Kisuke Urahara and Tessai Tsukabishi, based in the Urahara Shop out in the Human World.

Yoruichi Shihōin is a slender, brown-skinned woman of average height, with golden-colored eyes and long purple hair, which she keeps up in a ponytail. Her standard attire consists of a black, backless, sleeveless undershirt, an orange over-shirt with two white straps on each shoulder, a large beige sash around her waist, and black stretch pants with a pair of lightweight brown shoes, which allow for stealth and easy use of Shunpo. She previously wore a beige neck warmer, which she pulled up to cover her face in order to hide her identity, but seems to have forgone its use. She occasionally wears long beige wrist and leg warmers, each secured by bands. She, unlike any other known Shinigami, can transform into a small black cat for long periods of time. In this form, she has a distinctive male voice and golden eyes.

110 years ago, during her time as a captain, she wore the same sleeveless and backless Onmitsukidō uniform, with long black wrist guards which Suì-Fēng wears now, but had a black ribbon tied around her neck. She wore a long-sleeved captain's haori. Her hair was much shorter, cut in a style similar to Suì-Fēng's current hairstyle, but without the braids. At some point prior to this, she wore the white Onmitsukidō uniform of the correction corps.

Yoruichi is an intelligent and witty woman, holding an intimate knowledge of Soul Society and its workings, as she was the former leader of the Onmitsukidō and the Second Division's captain. Although of noble birth, she acts differently from most other nobles, very much like Kaien Shiba. For instance, she instructed Suì-Fēng to refer to her without using honorific suffixes, but reluctantly settled for being called "Yoruichi-sama" ("Lady Yoruichi" in the dub). On several occasions, she transforms into her Human form directly in front of Ichigo just to see his reaction to seeing her naked, which she teases him about. In addition, she speaks in a dialect used by elders, such as identifying herself as "washi" (a term usually used by old men to define themselves with), instead of more feminine terms like "watashi", in both her Human and animal forms.

While it is unknown how she obtained her cat transformation, she appears to prefer spending most of her time in it. Upon showing her Shinigami form to Ichigo, she forgot to put on clothes, as she had grown used to not needing them; due to being in cat form for so long. She especially takes delight in transforming in front of people to see their shocked reaction, due to her cat form making her sound male. Her love for her cat form extends to great anger should someone harm it or insult its appearance, as seen from how upset she got after her tail was damaged.

Although relatively calm and mature when a situation calls for it, Yoruichi is quite laid-back and playful, often teasing or flirting with those younger than her, such as Ichigo Kurosaki at the underground hot spring, a younger and hot-headed Byakuya Kuchiki, Suì-Fēng before her time as a captain, and Kisuke Urahara, childhood friend, former underling, and fellow ex-captain. Yoruichi prefers to drink milk, which fits with her practice of transforming into a cat.

Two of Yoruichi's unique items are accessories which grant the user the power of flight.

Feline Transformation: Yoruichi possesses the unique ability to shape-shift into a black cat at will. How she alone, out of all Shinigami, is capable of this is currently unknown. She has possessed the ability for well over 100 years, and it is known to others she knew from that time. She apparently has no set time limit on the transformation, as she had been in this form for over 100 years. In cat form, Yoruichi can still channel her spiritual energy and move at incredible speeds, though she is physically limited. Her transformation grants her a complete disguise, as her voice in this form is deep enough to lead most to assume she is a male.

Shunpo Master: Considered to be the most proficient Hohō master ever in all of Soul Society, Yoruichi is highly skilled in the use of Shunpo. Though this is by no means a unique skill, as most seated officers are capable of performing it to various degrees, Yoruichi holds the title "Flash Goddess" (瞬神, shunshin; "Flash Master" in the English version), because she has mastered this ability to the point where she can appear to be in several places at once and wipe out an entire Onmitsukidō squadron in seconds. She can easily close tremendous gaps of distance in the blink of an eye while remaining undetected, and can surprise Byakuya, who is one of the most proficient masters in the art as well. She has mastered all of the Onmitsukidō's speed-oriented techniques, and has even created some of her own, such as Utsusemi (空蝉, Cicada, referencing their molting). The full extent of her abilities remain unclear, but she was able to outrun Byakuya while carrying an unconscious Ichigo over her shoulder, performing around 300 steps before feeling tired from being 100 years out of practice. Suì-Fēng could barely keep up with her while Yoruichi was still holding back. She can still perform Shunpo while in her cat form, however, she is not as fast as she is in her true form.

Hakuda Master: As former Commander-in-Chief of the Onmitsukidō, Yoruichi is one of the most

accomplished hand-to-hand combatants in Soul Society. Her mastery of the art form is so great, she uses it exclusively as her form of combat, forgoing the use of a Zanpakutō altogether. She took down nearly 50 Onmitsukidō members with only Hakuda. She has taken on Espada-level Arrancar, such as when she brutally defeated Yammy, and is regarded by the 4th Espada Ulquiorra Cifer as highly dangerous. She fought three Shinigami captains and four lieutenant-level and above opponents at the same time with Hakuda without receiving any notable damage.

Expert Swordsman: While preferring to fight her opponents barehanded, during her days as a captain, Yoruichi showed herself to be a highly capable swords-woman, taking down a huge Hollow with a single strike of her sealed Zanpakutō

Kidō Expert: As former captain of the 2nd Division and the Commander-in-Chief of the Onmitsukidō, Yoruichi is well-versed in Kidō. Though she commonly employs Shunpo and hand-to-hand fighting techniques, she is masterful in using Kidō to further her capacity in combat, often mixing it with other fighting techniques. She has used mid to high-level binding and destruction spells with no incantation with expert skill. Her skill is great enough to almost effortlessly learn variations of Kidō with only simple instructions.

Master Assassin: As the former Commander-in-Chief of the Onmitsukidō, Yoruichi is one of the foremost masters of the art of assassination. She has repeatedly shown impressive skill in staying hidden and unseen. When necessary, she can effectively exploit having an advantage against an opponent or hiding her presence. Even Aizen was taken completely by surprise, and just as easily subdued.

Master Strategist: As the former head of her clan and ex-commander of the Onmitsukidō, Yoruichi is a capable leader. She has repeatedly proven to be insightful and crafty, capable of quickly understanding any situation that presents itself and adjusting to it effectively. Upon learning Ichigo would go to save Rukia no matter what, Yoruichi began making preparations of her own by training Orihime and Chad.

Immense Spiritual Power: As a former captain and head of a noble clan, Yoruichi boasts a larger than normal amount of spiritual energy. During Ichigo's Bankai Training, she kept the Tenshintai active for an extended period of time with her Reiryoku. The reputation of her power is enough to make 4th Espada Ulquiorra Cifer wary to engage in combat with her, even with the help of 0 Espada Yammy Llargo. Her spiritual energy and control of it is great enough to act as a shield from fairly powerful attacks, as seen from blocking Jin Kariya's lightning blast with a single hand. While using Shunkō, her concentrated spiritual power becomes far greater than normal.

Enhanced Strength: Despite her slender appearance, Yoruichi is quite strong in her Shinigami form. She could still easily use Shunpo while carrying around an unconscious Ichigo to outrun a fellow Shunpo Master. She easily caught a direct punch from Yammy Llargo, and simultaneously threw him several feet away. She easily injured him, despite his thick Hierro, with various unarmed moves, but it was later revealed she was injured by his Hierro. Though she admitted she wasn't expecting his skin to be that hard, she states she could have avoided taking any damage if she had Shunkō activated. A concentrated blow from Yoruichi can destroy an entire city block.

Enhanced Endurance: Despite her own admission of being out of shape, Yoruichi is a very resilient warrior. Both when out of breath from prolonged running against Byakuya and sustaining fractures from Yammy's Hierro, Yoruichi was still able to fight effectively while showing no signs of weakening.

As a former captain of the Gotei 13, it is known that Yoruichi possesses a Zanpakutō and has achieved Bankai, but she relies nearly exclusively on Hohō and Hakuda. Although she doesn't carry it at all in the current time, she wore it in the past. It resembles a kodachi or wakizashi which she kept sheathed horizontally behind her on her lower back, similar to how Suì-Fēng carries hers in the present day. 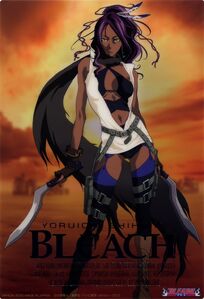 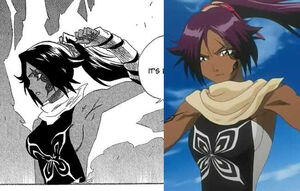 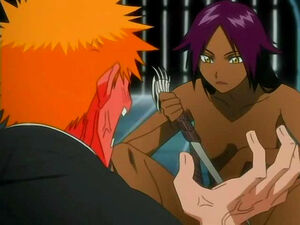 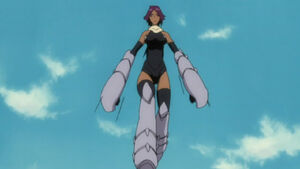 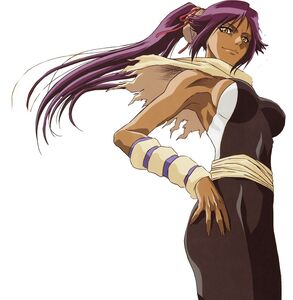 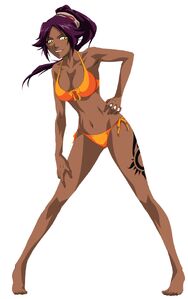 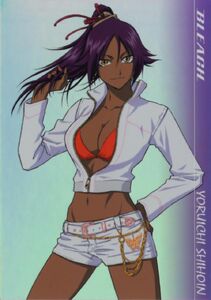 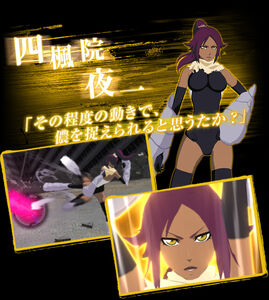 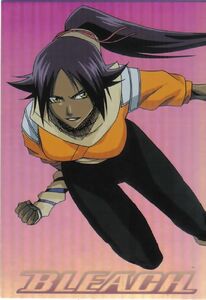 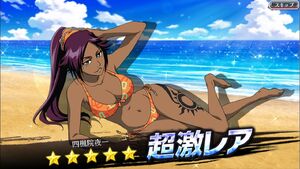