His vocal effects are provided by Frank Welker who is better known for the voices of Scooby-Doo and some of various creatures and monsters.

He serves as an ally to Daisy and Mario Bros., after President Koopa's demise, he decides to stay with Daisy and Toad.

Yoshi was first seen when he meets Princess Daisy for the first time when he was mistreated by President Koopa, Daisy befriended him and the two became inseparable, Yoshi tries to remove the chain necklace, but Daisy tells him to be careful and not to get hurt.

Lena, a madwoman tries to attack Daisy, but Yoshi saves her with his sticky tongue from Lena who stabs him in the neck, he quickly escapes from Lena and help Daisy to detach the chain necklace, he and Daisy are helped by Toad to stop President Koopa, after the death of President Koopa, he bids farewell to the Mario Brothers and decides to stay with Daisy and Toad.

Yoshi is the only dinosaur who has a friendly term with Princess Daisy, Toad, and the Mario Bros. 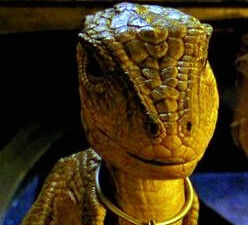 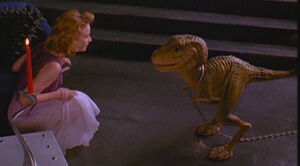 Yoshi's endearing grin at Daisy for freeing him from President Koopa and Lena's abuse. 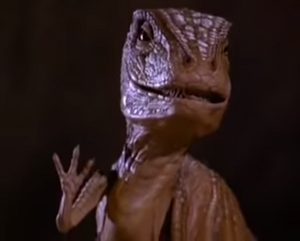 Yoshi bids farewell to the Mario Brothers. and decides to stay with Daisy and Toad.