Create a castle out of cake, Seal off the Karasumori site forever, Crush Kokuboro

Yoshimori Sumimura is the main protagonist of the manga/anime series Kekkaishi. He is the 22nd Kekkaishi of the Sumimura family and is tasked with dealing with Akayashi, supernatural beings that terrorise the land of Karasumori every night. His family, the Sumimuras, are one of two families that are descended from the Hazama clan, the other being the Yukimuras, to which his childhood friend, Tokine Yukimura, belongs to.

He is voiced by Hiroyuki Yoshino in the Japanese version of the anime and Vic Mignogna in the English version, the former of whom also voices Kai Miyagusuku and Firo Prochainezo.

Apart from the typical features of a young teenager, Yoshimori also has a number of distinctive traits. Among these, one of the most significant is the Houin on his right palm. He is also known for his diminutive stature, although this is mostly seen when compared with Tokine, who, it must be noted, is two years his senior. He is short, has black spiky hair and brown eyes.

As a child, Yoshimori was distinguished by his weakness of spirit: numerous flashbacks portray him as a boy who cried easily and frequently. His closest friend was Tokine, who often helped him when he was in trouble, despite the fact that their grandparents disapproved of them being friends. Early on, Yoshimori regarded his duties as a Kekkaishi with disdain, and resented his grandfather for expecting so much of him so soon. He would often spend time playing soccer instead of training. Constantly throughout the series, Yoshimori clashes with his grandfather, both because they are equally strong-willed and stubborn, and over Shigemori's clear loathing of the Yukimura family.

After Tokine was wounded saving Yoshimori from Yumigane when he was nine, Yoshimori adopted a firmer, assertive attitude in regard to his responsibilities as a Kekkaishi, and in protecting those around him (Tokine especially). Over time, Yoshimori's feelings toward Tokine develop into a rather obvious crush. This is most evident in the extreme lengths he goes to in order to prevent Tokine from coming to any further harm. Yoshimori immediately rejects any strategy that clearly places Tokine in harm's way, often goes out of his way to protect her (whether his help is actually wanted or not), and apologizes profusely any time Tokine is hurt, physically or emotionally, through his own actions. Possibly because Tokine is very vocal about Yoshimori not being her ideal, he is also immediately suspicious of, and hostile toward, any boys that she has significant contact with.

At first glance, Yoshimori is not especially close to either of his brothers. He does not seem to understand Toshimori, who, unlike him, is studious, serious, and well mannered. Likewise, Masamori and Yoshimori each envy the other's position in the family, and most of their conversations tend to be either tense lectures from Masamori, or jokes at Yoshimori's expense. Despite their disagreements, Yoshimori is never actually seen fighting with Toshimori, and part of him still admires Masamori and wants to be a strong Kekkaishi like he is (though by following his own separate path). In addition, Yoshimori has strong bonds with his parents. Raised largely by his father, who is always encouraging and kindhearted, Yoshimori seems to have inherited his father's compassionate heart. At the same time, Yoshimori has an almost desperate love for his mother, who is absent for much of his life, and he reacts furiously in her defense if she is ever insulted.

Yoshimori is typically tired and irritable during the daytime because his nights are devoted to his work as a Kekkaishi. This is juxtaposed with his pleasure in making others happy, as seen with his love for baking sweets, and, most notably, candy castles. His favorite drink is coffee milk, which is also enjoyed by most of his friends at school. Because of his long nights, Yoshimori constantly falls asleep during classes (though Tokine almost never has this problem). He even brings a pillow to school and often skips his classes to take long naps on the rooftop. Indeed, Yoshimori does not seem at all concerned with the state of his grades or constantly earning his teacher's annoyance, and possibly for good reason: it is implied more than once that unless Karasumori is dealt with permanently, Yoshimori's only real future is to protect the site for the rest of his life, and as such, education is hardly a concern (for much of Masamori's school career, he was replaced by a Shikigami clone, courtesy of his grandfather).

He is often called too considerate or "soft" by Tokine and Gen, especially when contrasted with Tokine's own often ruthless nature toward dealing with Ayakashi and even human ghosts. On several occasions when others told him to let matters lie, such as with the ghost of the pâtissier, Yoshimori went to great lengths to aid others when there was no real benefit for himself, indicating a charitable spirit. Yoshimori can also be very reckless, a prime example being when he allows an Ayakashi to take him to the Kokuboro dimension in order to get revenge on Kaguro for the murder of Gen, an act that gets him scolded by Tokine when the two return to their own dimension. While he does apologise sometimes, it's noted by Tokine that he never actually means it, since he keeps making the same mistakes and reckless decisions he's supposedly sorry for. Yoshimori is even aware of this, saying that while he always feels bad, he never changes.

Yoshimori initially has two personal dreams: to become strong so that no one is ever harmed at Karasumori again, and to bake the perfect candy castle (impressing Tokine as a bonus, as she clearly enjoys some of his creations, despite being critical of his love of baking). As he begins to question and learn more of Karasumori's mysterious origin, Yoshimori decides that he will seal the power of Karasumori forever, thus ending the constant threat of Ayakashi attack, and freeing both his family and Tokine's from their never-ending duty of protecting the site. After the power of Karasumori is sealed, Yoshimori decides to combine his love of art with an old dream, and become an architect (so that he can build a home for himself and Tokine).

Hazama-Ryu Kekkaijutsu: Yoshimori's primary ability. His abnormally high power levels, coupled with his penchant for blunt, borderline haphazard attacks, means that his use of the Hazama style is marked by larger, more impressive Kekkai than his colleague Tokine is generally able to produce. Through training, he has managed to dramatically improve his precision, though his style still tends to favor brute force over finesse.

Musou: Since completing his training in the Suminmura family well, Yoshmori has mastered a perfect Musou (blank) state, which completely shuts down his conscious mind and separates his powers from his emotions, using the resulting focus to dramatically increase his speed, precision, reflexes and power. This allows him to produce seemingly indestructible Kekkai in large numbers without any signs of fatigue or strain. While in this state, Yoshimori summons a familiar, or landlord, to maintain his connection to his heart. His landlord, Shiguma, takes the form of a striped cube that morphs into various animal and humanoid shapes. Shiguma can also relay Yoshimori's subconscious thoughts to his conscious mind, thus allowing the conscious Yoshimori to understand and analyze the world around him in ways he never could otherwise. As part of Yoshimori, though, Shiguma shares his taste for brute force at the expense of subtlety. 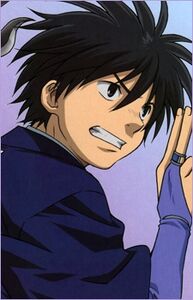 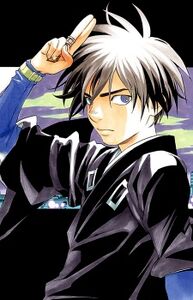 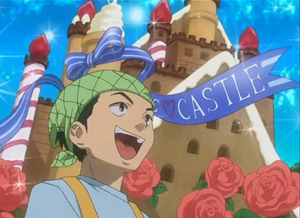 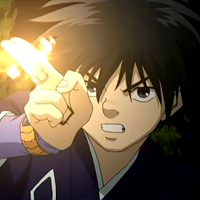 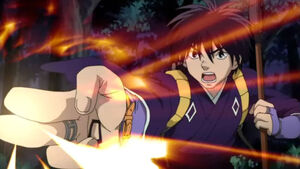 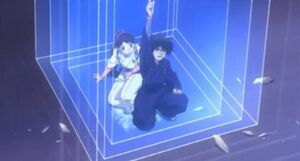 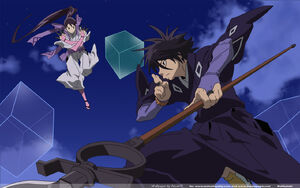 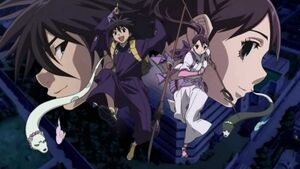 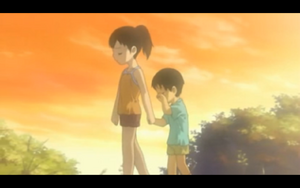 Yoshimori and Tokine as children 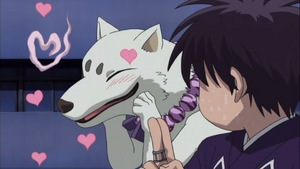 Add a photo to this gallery
Retrieved from "https://hero.fandom.com/wiki/Yoshimori_Sumimura?oldid=1720622"
Community content is available under CC-BY-SA unless otherwise noted.