When Yoshino first appeared in the series, it was also when she first encountered Shido. To Shido, Yoshino appeared to be a lost little girl wandering around in the rain for her parents. The next time they met, Yoshino fell under attack from the AST and ran away. The third time they met was when Shido made the decision to save Yoshino from herself and from the AST for he discovered that Yoshino was an extremely kind little girl even towards the people who were hunting and attacking her.

After having most of her power sealed by Shido, Yoshino started living in one of Ratatoskr's living quarters on Fraxinus temporarily before she moved down to the apartment complex next to Shido's home. Yoshino is currently practicing with the help from Ratatoskr how to speak for herself, or to be more precise, how to speak without the aid of Yoshinon.

Yoshino has the appearance of a young girl at about 13 to 14 years of age with blue eyes and hair. She wears a light-blue short dress under a large green raincoat that has a tail with a pink ribbon attached with a pair of rabbit-ear hood and holds her rabbit puppet, Yoshinon, in her left hand. Her preferred form of clothing appears to be sundresses along with boots that match her raincoat.

After her spirit power was sealed, the dress under her raincoat becomes the one that she wears now. In addition, she wears a straw hat with a ribbon attached.

Yoshinon is a mischievous white rabbit puppet that Yoshino always holds in her left hand. Yoshinon's right eye has a black button with a brown band that resembles an eyepatch, while its left eye is a very small pink dot. She can be very annoying and Yoshino has to cover her mouth when she sometimes speaks rudely. Yoshino looks up to Yoshinon as a role model and throws a tantrum when her puppet is lost, which always results in the surrounding area getting flash frozen. Yoshinon considers herself as an individual and not an extension of Yoshino which causes her to be unaware of what ventriloquism is.

Yoshino is described as a shy yet kind little girl and is far more passive than the other spirits. She possesses two personalities: Yoshino and "Yoshinon." "Yoshinon" is Yoshino's other personality that appears in the form of her puppet speaking through ventriloquism and was created to help her bear the hardships of being hunted by the AST.

Since Yoshinon was created based on Yoshino's ideal hero, the puppet often expresses more an outgoing and outlandish demeanor when speaking. The Yoshinon personality only exists within the puppet, when the two are separated this personality becomes dormant. This is why Yoshinon doesn't understand what ventriloquism is as the puppet believes it is alive.

At her first appearance, Yoshino is a very shy girl who is unable to articulate full sentences and express herself well, as she lets Yoshinon do the talking for her with its outgoing personality. She improves her communication after Shido sealed her powers and begins learning to integrate herself into society. Later in the story, Yoshino is able to converse with Shido instead of relying on Yoshinon.

Yoshino has the ability to manipulate all states of matter (solid, liquid, and gas) in her surrounding area. She usually uses her powers for defensive purposes only due to her kind and shy nature.

Her Angel, Zadkiel, is a huge puppet that resembles Yoshinon. Zadkiel has two forms, the first form resembles Yoshinon but is a lot bigger, with one red round eye and an eyepatch, large sharp teeth, and white skin. In this form, Zadkiel has the ability to absorb water from the ground and air and release it in the form of an attack. Yoshinon is also able to talk through the puppet and acts as a limiter to suppress Angel's powers so that it doesn't end up killing anyone. Zadkiel's second form appears to be its true form, this form also resembles Yoshinon but is even larger than when Yoshinon becomes Zadkiel. The second form is larger than a many-story building and does not have an eyepatch. This Zadkiel has the same powers as the other but is a lot more powerful. Even Yoshino has problems controlling the Angel.

Being a passive Spirit, Yoshino prefers to take non-aggressive actions such as running and hiding as opposed to engaging in combat against her enemies. 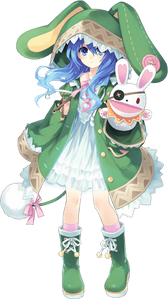 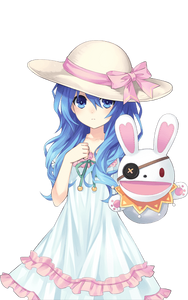 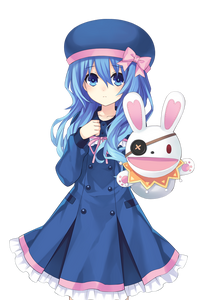 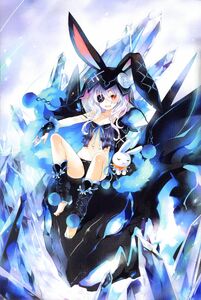 Yoshino's inverse version
Add a photo to this gallery

Retrieved from "https://hero.fandom.com/wiki/Yoshino_(Date_A_Live)?oldid=2248425"
Community content is available under CC-BY-SA unless otherwise noted.