Arifureta: From Commonplace to World's Strongest

Student (while in Earth)

Biting Hajime Nagumo and sucking his blood and seduce him.

Insulting and torture other men by kicking their balls.
Writing her diary.

Yue, Real Name Aletia Galdea Vesperitio Avatarl, is the one of the main female protagonists of Arifureta: From Commonplace To World's Strongest. She was once a vampire princess (later queen) of Avatarl until her subjects betrayed her and seal her within a labyrinth due to her immortality.

She is founded and freed by Hajime Nagumo as his most trusted companion and main lover.

After Hajime released her, Yue holds a loyalty and great love for Hajime and Hajime alone. She's extremely cruelty towards other men who are flirted for her as well looking down on them even if they are handsome or not, as she insulted them by called them ugly, small men, worthless and useless that including Kouki Amanogawa (Hajime's classmate who is a deluded idiot of his misguided justice) who annoyed her. Her loyalty for Hajime alone is the only thing she fights for but no one else. She is also a pervert who loves bites Hajime to suck out his blood as her sexual nature and has no problem of seducing him even they were bathing and sleeping while Yue was naked.

She also has conflicts for other girls who are flirts for Hajime such as Shea, Tio, Kaori and Shizuku as she called them "Worthless Rabbit" to Shea, "Hopeless Pervert" to Tio, "Closet Pervert" to Kaori and the "Last Boss" to Shizuku. She is shown in her brutal side that she will pulverize anyone who get in Hajime's way and killed anyone who hurts Hajime. She shown furious when they discovered her diary. She has good quality with her adoptive daughter, Myu.

In her past, she was a benevolent, yet spoiled bratty queen of her kingdom as she kicked one of her subjects at his balls. She tried to protect her subjects until she was betrayed and seal within the Labyrinth to ensure no one (not even Ehit) to search for her until she was found by Hajime.

Due to her sign of loyalty to Hajime alone, Yue is extremely ruthless, cruel and sadistic. She is never shy of killing or torturing men. She shown to be more cruel when she kicked and smashed many men at their balls. This is cruelty is not in fact, an influence or brainwash from Hajime, but rather a lesson for idiot men causing them to run away from her.

Yue is one of Hajime's most trusted companions and fellow who was also betrayed. Hajime freed her and join him in his journey. Hajime declared her as his lover. Yue usually bites Hajime and suck out his blood as her sexually nature. Yue has no problem of seducing him. Her sign of loyalty for Hajime has caused her to be disrespectful and cruel towards other men who tried to flirt her or insult Hajime as she smashed their balls. When Yue was captured by Eri and her body was possessed by Ehit, Hajime kills his way to rescue Yue. When Hajime fought Ehit, Yue freed herself from Ehit's influence allowing Hajime to kill the fake god. Following Ehit's death, Yue and Hajime hold their hands to use the "Age of Gods" magic to create a crystal key to open doorways to Japan. After returned to Japan, Yue became Hajime's first wife.

Shea is one of Yue's love rivals and fellow wives. When Shea flirts for Hajime, Yue became mad and pulverized her. Yue called Shea as a "worthless rabbit". After David's shot when insult of Shea, Yue cheered her up by make out of Hajime adores her rabbit ears. Yue accompany Shea's pleas to liberate her tribe and other beastmen from slavery.

Tio is one of Yue's love rivals and fellow wives. Hajime assigned Yue to torture Tio each time she neglects. Despite of being crazy, Yue believe Tio would be a good and powerful companion. Yue has a good terms with Tio when they go out for teas.

Kaori is Yue's love rival and fellow wive due to her being Hajime's love interest since middle school. Yue initial would refuse Kaori to join Hajime, but allow her to join when believe that she's Hajime's lover. Yue called Kaori as a "closet pervert" when she fed Hajime and eat her food when a used spoon that was eaten by Hajime. When Kaori was killed, Yue oblige to help Hajime to revive Kaori, Despite Kaori was revived, their rivalry still continues.

Yue viewed Shizuku as one of her love rivals. Yue got jealous of Shizuku and called her the "Last Boss" when Hajime was only thanking her. When Shizuku admitted she is in love with Hajime, Yue isn't bothered as she is Hajime's first lover.

Like her fellow wives, Yue is protective to her adoptive daughter, Myu. When Myu was about to be sold as a slave, Yue decided to free her and the other beastmen girls. She has good term with Myu. She isn't brutal at her due to her being a child.

Being Myu's birth mother, Yue has good term for her as she protected her daughter and holds no hostilities toward her when she is in love with Hajime.

Due to being Hajime's old social studies teacher, Yue shown respect for her and hold no hostilities even though she is in love with Hajime. She learned Aiko teach Hajime a lot back at school.

Liliana is one of Yue's love rivals and fellow wives when Hajime saved her in turn she is in love with him. Yue has respects for the princess and sympathize when she was abused by her ex-fiance and the prince Baius D. Hoelscher as she help the princess when she couldn't able to change his attitude.

Yue holds hatred toward the fake god, Ehit. Ehit merely viewed her as his "host body". While temporarily controlling her body, Yue freed herself from his influence allowing Hajime to destroy the false god forever.

Yue holds a great hostility toward the demon general for injuring Hajime. When she encountered, she rejected his offer to join the demons as her loyalty is Hajime alone and called Freid as ugly. When he attempt to attack her, Yue dealt a serious injury blow toward the general.

Due to her loyalty and love for Hajime alone, Yue is extremely cruel toward other men who tried to flirt for her and insult Hajime. She viewed other men are worthless, ugly and filthy worms that includes Kouki Amanogawa. She called the templar knights commander, David as a small man. Similar to a Yandere, Yue usually smash men's balls when she kicked them.

Like Hajime, Yue is highly disgusted by Kouki Amanogawa's empty idealism and delusional prides when he foolishly believe to her that she was forced to join Hajime as well to try to "convince" her to leave him only for Yue to be greatly annoyed by his ignorance and insulted him. Yue deemed Kouki to be a emotionally incompetent weakling as he is useless to him. Even worse of all she was willing to kill Kouki for attacking Hajime on his easy defeat by Hajime once again. 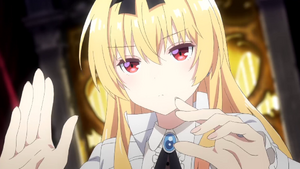 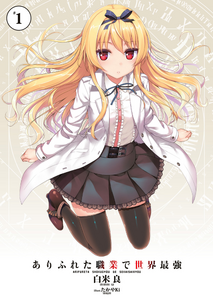 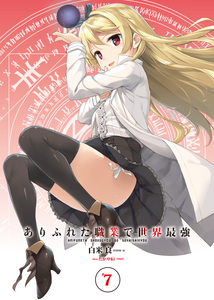 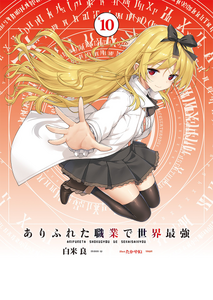 Retrieved from "https://hero.fandom.com/wiki/Yue?oldid=1767884"
Community content is available under CC-BY-SA unless otherwise noted.