Navel Laser (can fire a sparkly laser beam from his navel; given by All For One)

Become a Pro-Hero.
Be free from All For One's clutches (both ongoing).

Yuga Aoyama, also known as the Shining Hero: Can't Stop Twinkling, is a recurring character in My Hero Academia. He is a student in Class 1-A at U.A. High School, training to become a Pro Hero. Later on, it was revealed that he was the U.A. mole working for All For One, but only because he was forced to without a say in the matter and genuinely wished to be with his friends.

Yuga is a young man with a slim figure, his face appears rather feminine and he has long, flattened yet spiky blonde hair.

His hero costume is bluish-black, yellow-lined body suit over which he wears a metallic set of armour. He has two shoulder plates, along with a belt support item that allows him to use his Navel Laser Quirk. His costume comes with a sparkly, indigo cape and a red-tinted wing-shaped visor.

He is the most flamboyant student at U.A., who talks pridefully about himself and tries to grab the attention of those around him, in vain. To add to his exuberance, he has French heritage, and the French language is considered to be a romance language. His expression rarely deviates from a smile, even when hurt. His mannerism includes always smiling, acting luxorious, posing, showing vanity, and adding French words to his sentences. To make him seem even more stylish, he's always looking at the screen, breaking the 4th wall (unless he's talking to somebody).

However, it was revealed in Season 4 that this personality is mostly a facade. He acts prideful to hide the fact that he truely feels insecure. He views himself as below everyone else in Class 1-A, due to his insecurity about having a defective quirk. Due to his thoughts of himself, he is naturally a loner, who lacks social skills. Deku has stated that Yuga's social skills are very unreadable, as when he appeared to be creepy, he actually was trying to be nice.

His confidence is also fake. While he appeared confident in his fight against classmate Mina Ashido, he likely had no confidence at all. She beat him easily. When he's showing his true colors, he'll prefer to hide rather than fight, as shown when he hid from the villains in a bush during the Forest Training Camp Arc. However, he will be willing to take any chance to save a comrade, as shown when he gave Mr. Compress a surprise attack with his beam in their mission to retrieve Bakugo from capture by the villains.

Eventually it was revealed that Yuga's insecurities stemmed from him being a pawn of All For One forced to do his bidding under the threat that he would kill his parents should they refuse. This caused his parents to constantly force him to do treacherous things out of fear for their lives, and Yuga was always torn between saving his parents and being with his classmates whom he genuinely grew attached to, which was why he saved Katsuki in the first place and laid down the cheese as a discreet cry for help.

He even believed that when All For One was captured, he would be able to live happily alongside his friends and be a true hero. But in the end, All For One's treatment of Yuga made him even more insecure than before, to the point that he saw himself as nothing more than a rotten villain.

Navel Laser: Aoyama's Quirk allows him to fire a sparkly laser from his chest, this beam is powerful enough to blast through solid concrete and propel him in whatever direction he chooses. The major drawback is that Aoyoma will suffer from intestinal troubles if his Quirk is used for more than one second; at first, it is explained that his own body isn't accustomed to his power due to a birth defect, in which he wears his support belt to compensate, but the real reason is that he was given his Quirk by All For One and Aoyama, being Quirkless, did not have a physique to bear an unnatural Quirk. While Aoyama originally had trouble with his Quirk, further training in U.A. High School allowed him to reduce his weaknesses and become better at handling it. As noted, he obtained this Quirk as a child after his parents made a deal with All For One, because they did not want him to endure the stigma of having no Quirk, but it came with a price: the Aoyama family would be servile to All For One.

Navel Buffet Laser: Yuga fires beams from his belt as well as his shoulders.

Navel Saber: Yuga concentrates energy from his ability and shapes it into a cutting blade attached to his belt.

Can't Stop Twinkling: Supernova: After charging his Navel Laser for 5 seconds, Yuga can unleash a much more powerful laser that has a wider diameter and is more destructive. This takes 4 seconds longer to charge than what he can comfortably withstand, which is why he doesn't use it often. 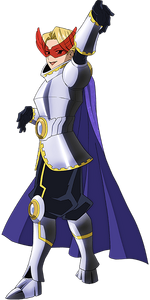 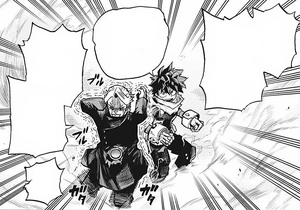 Yuga and Izuku taunt at All For One