Yukari Kotozume is the main characters of KiraKira☆Pretty Cure A La Modewho is a second year high school student. She is rather selfish and above everyone else like a cat. Yukari's alter ego is Cure Macaron and she is based on macarons and cats.

Her catchphrases are "How Interesting" and "Fufufu...".

She is voiced by Saki Fujita who also voiced Ymir in Attack of Titan and Hatsune Miku in Hatsune Miku: Project DIVA.

Yukari has sharp purple eyes and long, wavy purple hair with thick bangs. She wears a stylish lilac trench coat held shut with a lavender ribbon on the navel, over a purple top and a short gray pencil skirt. She also wears thin purple boots, magenta earrings, and sometimes wears a wide-brimmed lilac hat with a purple band around it. In the summer, she wears a long, short-sleeved light purple dress with a lilac sash around the waist that ties on the left and light purple high heels. In the winter, she wears a light purple cowl-neck sweater dress accented with a thin dark purple belt along with indigo tights and short purple stiletto-heeled boots. She sometimes wears a short lighter purple jacket accented with a lilac sash and purple gloves.

In the future, she has cut her long hair into a bob.

As a child, her hair was tied into two curved ponytails. She wore a light violet blouse with white collars and a purple button donned in the middle.

As Cure Macaron, her hair grows longer and thicker, adorned with a large purple macaron on the left of her head with two magenta gems and a lilac ribbon. She gains dark purple cat ears and a tail, and keeps her earrings. Her short purple dress is composed of a white bodice with lilac frills and dark purple buttons and fabric sewn to the chest. The skirt is puffed to resemble a macaron with her Sweet Pact residing on her left hip set on a purple ribbon. Pieces of lilac ribbon is sewn around the middle, over a raspberry layer lined with purple fluff. Around the neck is a long amethyst ribbon. She gains white opera gloves and thigh-length amethyst stilhetto boots with a lavender toe design. On the left ankle is a silver anklet adorned with three raspberry spheres.

In her A La Mode style, her hair becomes longer and lighter. Her cat ears are thinner and stick out of a light purple fluffy hat, and her macaron accessory gains a thick raspberry ribbon. Her dress grows in length and resembles a princess gown. The top loses its bodice design, with the middle turning raspberry while the chest and sleeves are made out of lilac fluff. Her skirt loses the pact and ribbon, with the top now a two-layered peplum lined with white frills residing over a raspberry bunched fabric. The remainder of skirt resembles thick frosting petals, each with a large violet sphere near the bottom. Her gloves now end at the wrist with a raspberry ribbon, and the ribbon on her neck turns purple and loses its long flowing tails, gaining a raspberry gem in the middle. Her boots loses its left anklet and becomes thigh-high.

Her Patisserie outfit includes light purple boots with slightly darker ribbon to match the ribbon on her hat and stripes on her sleeves. At the center of her chest is a ruffled piece of cloth.

Yukari is a clever and refined lady with a fickle personality, who is prone to tease others to get different reactions out of them, mostly out of being egotistical. She is quite sensitive, being immediately able to tell that something was off with Rio. Spending time with Ichika and the others and being a Cure makes every day an unpredictable experience, and this liveliness is something Yukari seeks. She also takes an interest in macarons after her own first batches fail.

As a child, Yukari kept on trying out new things in order to find anything she would feel passionate about, but she was not able to. Being seen as "perfect" becomes depressingly dreary to her, and nobody wanting to look beyond that "perfection" makes her feel lonely. Since enjoyment cannot be given to her, she realizes that she needs to create enjoyable situations herself. She embraces this and herself in episode 29, and admits she won't be able to erase her inner darkness and sadness, but being with her friends and surrounding herself with a "colourful world" makes her able to deal with it.

Ichika Usami - Yukari is interested in Ichika's bumbling and is able to enjoy every day more after meeting her. Ichika in turn admires the older high school student greatly and they are on good terms with eachother.

Akira Kenjou - They go to the same school, and are very popular with the other students. Their personalities initially clash, with Yukari criticizing Akira's selflessness and Akira being at odds with Yukari's fickle nature. After Akira witnesses Yukari's kindness and Yukari recognizes Akira's passion and tenacity, they become very good friends. KKPCALM10 They are often seen spending time with eachother afterwards. Akira and Yukari's relationship has developed in a romantic way over time, notably in episodes 25 and 29. Their duet is a love song as well.

Three-star Kitty - Yukari is apparently the only person this elusive cat allows to pet him, even going so far as to run up to her and lie down on his back as soon as he sees her.

Kotozume: Koto means 'harp' while Zume means 'fingernail' or 'claw' which could be a reference to a cat's claw.

Yukari: means 'affinity'. It can also mean "violet", a nod to her color scheme.

Macaron is a type of French dessert that has cream in the middle and comes in a variety of colors.

Yukari makes a brief cameo appearance in the first episode of the show, when she sees the vision of a macaron in the sky after a kirakiraru eruption at Ichigo Mountain. Her next short appearance is at the end of episode 4, when Ichika accidentally bumps into her as she takes a jump, and she chuckles in response.

Ichika, Himari and Aoi then learn more about Yukari, who is extremely popular among her high school peers and the townspeople and is rumored to be one of the most beautiful girls in the whole school. One day, while Ichika attempts to pet Three-star Kitty, Yukari notices and is successfully able to pet him herself. She then slowly warms up to Ichika. So much so, that the next day, Yukari takes her around town, first to a boutique where she tries on different outfits and then playing a crane game and looking at the different-colored macarons among other things. Ichika notices something is up with Yukari whenever she sees them, so she suggests Yukari stops by the KiraKira Patisserie soon so they can make their own macarons together. Himari and Aoi are shocked to see her at the patisserie as them, along with Ichika, start making the macarons. When they didn't turn out right, Yukari makes a batch herself, but they do not turn out right and didn't taste as well as they want it to. Yukari then briskly makes another batch, and the finished cookies all looked cracked, so she tries to make yet another batch when Ichika suggests decorating it to fix it, and she then does so for one of them, having it resemble a cat. Seeing it makes Yukari smile, but the celebration doesn't last long when Maquillon, a Kirakiraru Thief that would steal the Kirakiraru from macarons, appears and steals more from the ones they already made. The three Cures, wanting to protect them, transform to battle her but have a difficult time doing so. Just then, Yukari, wanting to defend the macarons, stands up to Maquillon. As a result, the cat macaron she held became an Animal Sweet and a Sweets Pact, allowing her to transform into Cure Macaron for the first time. Using her newfound cat-like agility, she is successfully able to defeat Maquillon, turning her back into her normal size and restoring the Kirakiraru she stole from all the macarons. KKPCALM05

Cure Macaron (キュアマカロン) is the Pretty Cure alter ego of Yukari. She transforms using the phrase "Cure La Mode・Decoration!". In this form, she becomes quick and agile and her nails can grow into claws like a cat.

Yukari's voice actress, Saki Fujita, has participated in several image songs for the character she voices. Many of them include duets with Karen Miyama, who voices Ichika Usami, Haruka Fukuhara, who voices Himari Arisugawa, Tomo Muranaka, who voices Aoi Tategami, Nanako Mori, who voices Akira Kenjou, and Inori Minase, who voices Ciel Kirahoshi.

Official profile of Yukari in her patisserie outfit from Toei's website

Official profile of Yukari in her school uniform from Toei's website

Official profile of Yukari in her summer outfit from Toei's website

Official profile of Yukari in her winter outfit from Toei's website 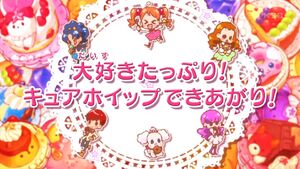 Yukari about to use the Sweets Pact to transform 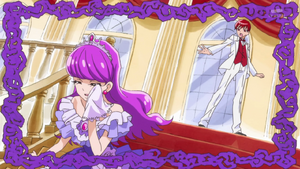 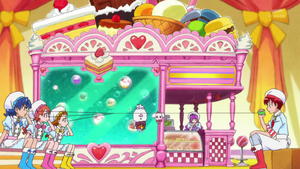 Yukari holding up a drawing of Bibury that Yukari's fanclub produced

Yukari is amused at Pikario 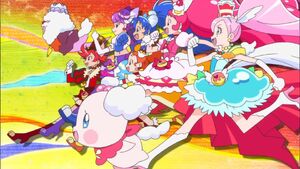 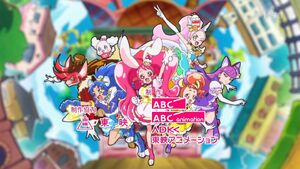 A younger version of Yukari appeared inside Elisio's mirror

Macaron acknowledges the darkness inside her

On her crystal cat during Fantastic Animale

Playing with kirakiraru while recreating the world 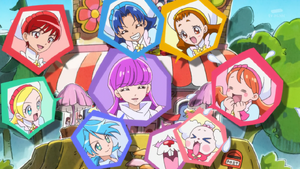 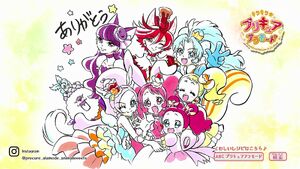 Retrieved from "https://hero.fandom.com/wiki/Yukari_Kotozume?oldid=2077170"
Community content is available under CC-BY-SA unless otherwise noted.