Working with her Newspaper Club

Heroic Witch
Yukari Sendo is a witch and is one of the main protagonists of Rosario+Vampire. She is a self-proclaimed genius and the smartest student at Yokai Academy, despite being the youngest.

Yukari tends to have a playful personality. Seeing as she started high school when she was eleven, this is not much of a surprise. She is very cheerful about most things. When she intially went to school, the other students were prejudice against her, hurting her feelings and causing her to lash back at them with pranks. Yukari often gets into arguments with Kurumu over whether it is better to be flat-chested, but she seems to embrace her flatchestedness. Despite being young, Yukari seems to "swing both ways" when it comes to love; she cares for Tsukune and Moka equally. As she is flat-chested, Yukari joyously squeezed Moka's own, claiming that compared to her own, Moka's breasts are a dream to have. She also proclaimed that her wish is to have a threesome with Tsukune and Moka. Unlike the other girls, by the time Fang Fang was introduced, Yukari has become accustomed to the idea of being a harem and doesn't want Tsukune to end things.

When Yukari's personality had been switched with Fang Fang's with her Ishin Denshin, she became unsure of herself. She began to think that Tsukune viewed her as a younger sister and "not a woman". Tsukune, however corrected her (Thinking he was talking to Fang Fang) and told her how her knowledge and magic had saved them numerous times and that she was one of his most-trusted friends. 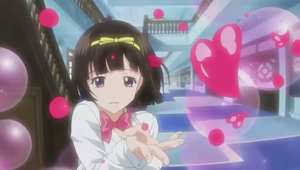 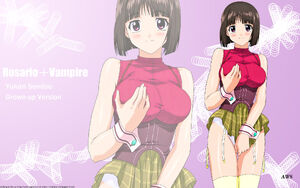 Yukari in her adult sized body 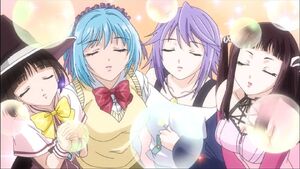 Add a photo to this gallery
Retrieved from "https://hero.fandom.com/wiki/Yukari_Sendo?oldid=2225610"
Community content is available under CC-BY-SA unless otherwise noted.