Heroes Wiki
Register
Don't have an account?
Sign In
Advertisement
in: Articles under construction, Spoilers, Animals,
and 12 more

Yuki is the deuteragonist of the 2012 Japanese Anime Wolf Children. She is a wolf-child, the only daughter and the eldest child of Hana and the older sister of Ame. She is followed from age 0-11. She appears for the majority of the film. As a baby, she is spunky, energetic, and wild. As a preteen, she is uptight, quiet, and serious.

As a baby, she is very wild and wolf-like. Her personality is the polar opposite of her little brother Ame's personality, who is quite timid and shy. She is very outgoing, energetic, and lively. She can be a brat sometimes, but most of the time is sweet and happy.

As a preteen, her personality drastically changes. She is still very sweet and happy, but slightly more uptight and quiet, and has completely lost her wildness she had as a baby. She is very careful not to change into a wolf. As a matter of fact, the only time as a preteen she's seen in her full wolf form is when she has her fight with her brother Ame.

As a baby in human form, she has pale skin, long auburn hair, and red eyes. She wears a short pink dress as a toddler, however, at age 6, she starts wearing a blue dress that she wears up until the scene when she reveals her secret to Sohei. As a baby in wolf form, she looks very similar to her human form. She has peach fur, red-auburn hair and ears, red eyes, and a black nose. Her short pink dress wraps around her neck while in wolf form.

As a preteen in human form, she has pale skin, her auburn hair has turned brown, and her red eyes have turned brown as well. She wears the same blue dress she starts wearing at 6, but in the scene when she reveals her secret to Sohei, she is wearing a short sleeved light blue dress. She is only seen once in full wolf form, but as a wolf, she has peach fur, brown hair, and brown eyes. 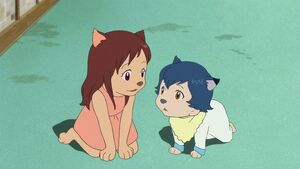 Yuki With Her Brother Ame 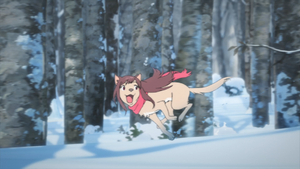 Yuki As A Wolf Pup 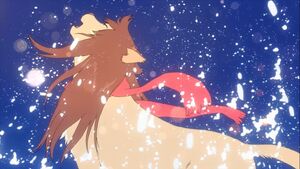 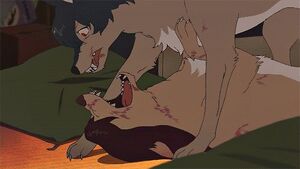 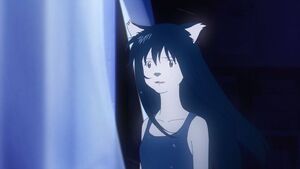 Yuki Reveals Her Secret To Souhei. 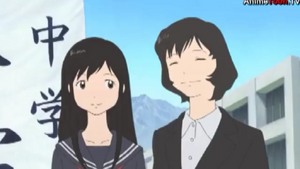