Yukiko Amagi is a character from Persona 4. An elegant young woman, she is well-known as the heiress of her family's inn, the Amagi Inn.

She was voiced by Ami Koshimizu int he Japanese version, and by Amanda Winn-Lee in the English version.

Yukiko is young, beautiful student with long, straight black hair, a red hairband, and grey eyes. In battle, she wears red glasses. As with most playable characters in the game, Yukiko wears her Yasogami High uniform along with a red sweater and black opaque tights. On summer school days, she appears virtually the same, save for that her sweater is now smaller and unbuttoned. On regular holidays, she wears a red dress and flame scarf, along with black, knee high-boots, while on summer holidays, she appears in a black shirt with puffy sleeves, and a short white skirt. At the summer festival, she wears a violet yukata with a pink obi.

In Persona 3 Portable (two years before the events of Persona 4), she makes a brief appearance where she dons a black seifuku uniform, and has short hair with a white headband.

When she was a child, from her appearance in the anime, Yukiko had braided pigtails, and wore a bright pink dress. She appears the same in the manga, albeit her hair is short.

In Persona 4 Golden during winter schooldays, she wears a beige coat with a red scarf, and appears in a white snowsuit on the ski trip. In the epilogue, she wears her hair up in a neat bun, along with a wears a snow white dress with a sky blue cardigan, and white sandals.

Yukiko is a rich young woman who is popular with boys and girls alike. Often scoring the best during exams, she is very intelligent and often repeats the material with Chie, her best friend. As a smart, beautiful, feminine, and fair-skinned teenager, she has attracted many male characters in Inaba, but she doesn't seem to be comfortable when someone mentions her beauty. At first, Yukiko is very introverted, but she gets livelier after she is rescued from the Midnight Channel.

A notable running gag is that she tends to have very easy laughing fits from the slightest jokes, though there are later times where even Teddie of all people fails to make her embrace a joke. 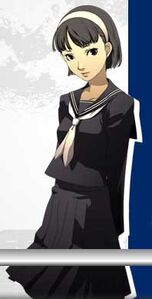 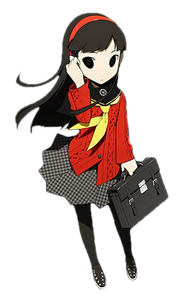 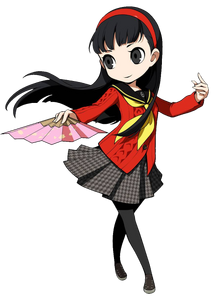 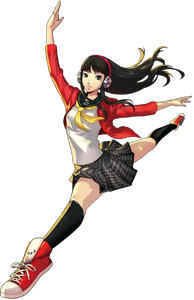 Retrieved from "https://hero.fandom.com/wiki/Yukiko_Amagi?oldid=2273253"
Community content is available under CC-BY-SA unless otherwise noted.