Animals
Yukimura is one of supporting characters of Gings Densetsu Weed. He is the oldest son of Gin and Sakura. He is Saheiji's adopted son and leader of his pack of sixty dogs.

He has red fur and blue eyes, like his grandfather Riki and his nephew Orion. He has large claw marks going across the right side of his face and across his eye.

He was a proud and stubborn but fundamentally fair young, obscured by a sense of vengeance on justice.

Yukimura was born in the Northern Alps with her two brothers, but Sakura, the puppy's mother, began to decline soon after she was born. At a very young age, Yukimura learned to eat solid food and catch small snakes. He could distinguish toxic snakes from non-toxic ones.

Because Yukimura and Joe were stronger and more independent than the youngest Weed, Sakura gave them a friendly dog ​​named Saheiji to take care of them. Yukimura followed the Saheii, even though he realized he could no longer see his youngest brother and mother. He realized that he was the son of Ōu chief Gin. As the eldest, he wanted to protect Joe.

Yukimura traveled with his brother and foster father to Gunma, where they were attacked by Japanese macaques under the control of Shougun. The macaques hit the river and Yukimura tried to crash, but the monkeys hit him as well. The blows gave him permanent scars to his right eye and forehead. Yukimura saw his unconscious brother being dragged away and thought he was dead. Yukimura would probably have lost his life if Saheiji hadn't rushed over to protect him from the attacks.

Saheij's packs ran in and drove the macaques off, but Saheij's back body had been paralyzed by the blows.

As he grew older and stronger, Yukimura became the next leader of the Saheij's pack, though he greatly respected his father and held him above himself. Hōgen had once tried to recruit Yukimura into his packs, but he refused. As a result of his past, Yukimura began to hate macaques and killed everyone who got their teeth. He developed a pack of training for young dogs in which monkeys were brutally tortured to death. Yukimura and his subjects also preyed on monkeys for food. Yukimura even developed his own technique, Neck The Killing to kill monkeys with great efficiency.

Yukimura appears for the first time when he rescues Macao from Jerome, Kichi, Koji and Mitsuo. He also meets Weed, rescuing him and his friends from Akazaru's ambush. Yukimura is puzzled by how much Weed resembles Joe. He understands Weed to be his other brother, but takes it for granted. He takes Weed and his friends to an old, abandoned mine that his herd holds.

Yukimura decides to train Kōichi, Kōji and Mitsuo and tries to encourage them to attack Pepe. Weed, Jerome, and other Ōhu army do not accept such cruelty, even though Yukimura reveals to them what happened in his past. Yukimura refuses to change his mind about monkeys, though Gozaru tells him that the cause of all evil is Shōgun. Yukimura and Weed, in their disagreement, find themselves in a duel that Yukimura wins with his own technique. Yukimura informs Weed and Gozaru that they will march to war against Shōgun in three days. The next day, Weed sends Sasuke to fetch Ōhu's army, but he is captured by Shōgun's subordinates. Ishizaru asks Yukimura to help and he agrees, though suspiciously.

Later, Weed and Jerome will ask Yukimura for help as Pepe is imprisoned and taken to Shōgun's headquarters. Yukimura is reluctant to help the monkey and Ōhu's dogs, but Saheiji speaks to him while revealing that he is not his real father. Yukimura leads his packs in the battle against Shōgun and finally changes his mind about the monkeys when he sees them fighting Shōgun.

In the battle, Yukimura attacks Shōgun's neck with Neck The Killing and assumes with confidence that it has been a deadly blow. He runs to see the condition of the wounded GB with Shōgun attacking from behind and punching a sharp stick into Yukimura's stomach.

Jerome carries Yukimura to a sheltered place, but Yukimura is not ready to surrender and asks Jerome to carry him on a rock ledge. Up there, Yukimura waits for Weed's sign, Battōga, and then plunges down towards Shōgun. For the first time, Yukimura uses Battōga and strikes Shōgun's head, tearing off his scalp. Gin and his army, who had just arrived, saw this brute. Yukimura fell to the ground and the dogs gathered around him. Shōgun was still dead, but Gozaru's troops are finishing it.

Saheiji reveals to everyone that Yukimura and Weed are brothers, and asks Gin to talk to his son. Gin refuses because Saheiji is the adopted father of Yukimura and thus a real father to him. Saheiji praises the dying Yukimura, who at the time of his death remembers the times when he and his two brothers were playing together in the care of their mother, Sakura. Then he falls to his last dream, when Gin, Weed and a whole packs of dogs howl in his memory. 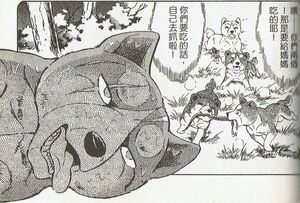 Yukimaru's Death
Add a photo to this gallery

Retrieved from "https://hero.fandom.com/wiki/Yukimura?oldid=1855939"
Community content is available under CC-BY-SA unless otherwise noted.