Ruler of the Heavens

Spending time with his family.
Hanging out with Shingen.
Eating.
Sleeping.
Writing.

Defeat Nobunaga Oda and other villains.
Protect Japan and the world.

Yukimura Sanada, A.K.A Scorpio in Devil Kings, is one of the main protagonists in the Sengoku Basara video game series.

He is voiced by Johnny Yong Bosch in the English version of the franchise.

Yukimura Sanada is one of the poster boys for this series, along with Masamune Date. He's actually one of the most distinguished warriors in the Sengoku Era who opposes Ieyasu Tokugawa to the end. Wields two jūmonji-yari.

His hot-blooded and "battle-crazy" character contrasts strongly with the Oushuu's head cool demeanor. In Yukimura's life battle is everything. His master and revered idol, whom he's fanatically loyal to, Shingen Takeda, is the commander of one of the strongest armies of the Sengoku. Shingen's method of educating Yukimura consists of punching him and giving him life lessons (always with battle metaphors).

Probably because of this, Yukimura is incredibly naive and completely ignorant of anything related to the opposite sex, leading him to be made fun of by Keiji Maeda, cringe in horror at the Maedas' lovey-dovey antics, and have humorous conversations with his ninja subordinate, the lazy and aloof captain of the Sanada Ten Braves, Sasuke Sarutobi.

Another remarkable quality of his personality, mostly shown in the anime, is also his very respectful side for everyone he talks to: always adding suffix like -dono or -sama.

Yukimura's way of fighting is 100% "frontal", one-on-one, with no tricks or cheating. His ideal is to walk the path of the warrior, and constantly searches for new possibilities to test his skills (preferably by battling Masamune Date), all the while supporting his master's goal to enter the capital and conquer the country.

It is revealed in Yukimura's blue path in Sengoku Basara Samurai Heroes that despite Shingen being one of the more powerful leaders in the country, financially speaking the Takeda army is completely broke.

In Sengoku BASARA the animated series , Yukimura plays a role as one of the main character alongside the lord of Oshu, Masamune Date and Keiji Maeda, as well in Sengoku Basara 2. Throughout the first series, Yukimura serves Shingen Takeda through and through. Once Shingen had suffered a wound in his battle with Mitsuhide, which left him unable to battle, Yukimura felt devastated. Quote "I feel as if I don't know what to do anymore."

Masamune Date quickly snaps him out of it as they rush to put an end to Oda.

In Sengoku BASARA 2, Yukimura starts to see how their actions affect the people around them and wants to know how much longer must he fight before peace can be achieved.

In Sengoku BASARA 3, Yukimura's style seems to lean on continuously attacking. Yukimura gains a new attack - a simple thrust with the right spear- that acts as a "connector" for other attacks. This attack is used as a dash attack (attack button while dashing) or as a follow-up attack for his skills (press the attack button at the end of the skill). While the thrust attack is not as spectacular as most of his other attack, it can be followed-up with his normal combo with little to no delay. Thus, it's possible to perform his S-String -> use a skill -> follow-up thrust -> S-String -> skill -> follow-up thrust and so on. This allows players to pull off long combos as long as Yukimura can still attack.

Additionally, some of Yukimura's skill also become usable in mid-air, and it is still possible to follow-up with his thrust attack with them. 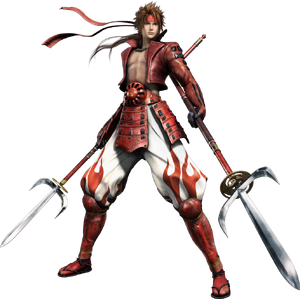 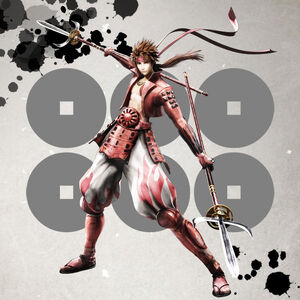 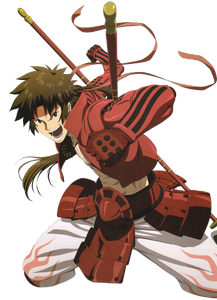 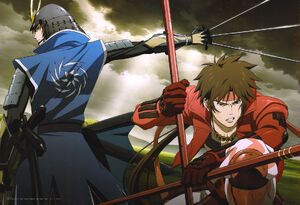 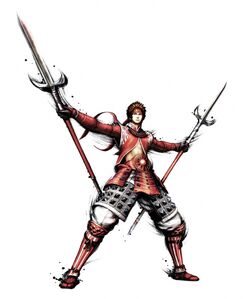 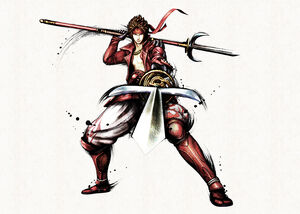 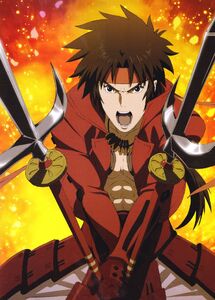 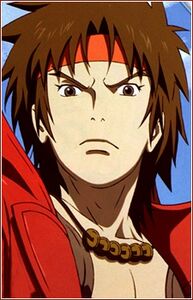 Retrieved from "https://hero.fandom.com/wiki/Yukimura_Sanada_(Sengoku_BASARA)?oldid=1937386"
Community content is available under CC-BY-SA unless otherwise noted.