Yumie (Yumiko Tagaki) is a anti-heroine in the anime/manga series Hellsing. was a katana wielding nun that worked for The Vatican Section XIII Iscariot Organization. Yumie was usually seen with Heinkel Wolfe.

Yumie was raised with Heinkel Wolfe and Enrico Maxwell in Alexander Anderson's orphanage and first appears in Volume 6 of the manga and Episode 5 of the OVA. She is formally introduced alongside Heinkel after Anderson rescues Integra Hellsing from Millennium troops.

The two reprimand Anderson for his actions but join him in battle against the vampires. Afterward, they repeatedly worry and argue about violating orders given by Maxwell to either not interfere or take Integra into custody. Yumie starts to draw her sword on Integra and must be directed by Heinkel to stand down.

Anderson decides to walk Integra home and Yumie becomes a reluctant part of the escort until Maxwell reaches London with the rest of the papal forces and Alucard arrives soon after. Yumie and the rest of Iscariot's advanced guard are deserted by Anderson after he helps Alucard's familiars kill Maxwell and states his intent to fight Alucard. She and Heinkel are distressed and protest his plan after being told to leave.

Yumie is next seen during the battle between Anderson and Alucard when she and Heinkel lead a charge of Iscariots to assist him. She and the others are once again told to go home but they insist it is their duty to remain and join the combat. Anderson eventually reaches Alucard with their help and Yumie is shocked when he pulls out the Nail of Helena and turns himself into a Monster of God.

She mourns his death after his defeat until Walter arrives and desecrates Anderson's remains while speaking contemptuously on the man. Yumie is completely enraged and immediately attacks Walter. Although moving extremely swiftly, she is outmatched and cut into pieces by Walter's wires. Heinkel is hysterical and aims her guns at Walter, only to be shot and wounded by The Captain.

Yumiko always dresses in a standard Catholic nun's uniform, which consists of black robes, a nun's hooded cowl, a white scarf, and white gloves. She has long black hair, although little of it is visible beneath the cowl, and wears glasses. When her glasses come off- whether she removes them or they are forcibly knocked off - Yumie "wakes up". Yumie prefers to remove the nun's cowl, keeping the scarf around her neck and letting her hair flow free. Yumie also has slightly narrower eyes and usually can be seen with a maniacal grin. She also carries her katana, holding the sheath in one hand and the blade in the other when in use. She wields the sword in either hand. Yumiko Takagi is noted to be the only Hellsing character stated to be of Japanese ethnicity.

Yumiko is a fearful, timid, and quiet nun with Multiple Personality Disorder who is a pacifist, and is easily frightened and pusillanimous. However, when her glasses come off, her alter-ego, Yumie, is unleashed. Yumie is very reproachful, censorious, impulsive, and violent, showing no fear of anything and preferring to negotiate using the sharp end of her katana. She seems to genuinely enjoy killing people, having almost superhuman strength: she is adept enough to kill her victim from outside the room, and is capable of smashing heads into walls with her bare hands. Yumiko has often commented how hard it is for her to "get Yumie to sleep" after she has been provoked into action. Her raw strength, fearlessness, and fearsome katana skills make her the ideal partner to Heinkel, who is imperturbable, cool-headed, and analytical. Both Yumiko and Yumie are devout to their religion; however, Yumie is loyal to her church to the point of fanaticism, and is glad to slice down anyone she sees as a "heathen".er, only to be shot and wounded by the Captain. Yumie makes a full appearance in OVA V.

She knows various sword drawing techniques and is adept enough to kill even from outside the room where her victim is, but is quite capable of smashing men's heads into walls with her bare hands as well. Yumiko has commented how hard it is for her to "get Yumie to sleep" after she has been provoked into action. Usually Yumiko and Yumie switch control over her body when Yumiko's glasses come off, or when either is knocked unconscious. Heinkel uses this technique to awaken the latent Yumie and have her brutally killed. 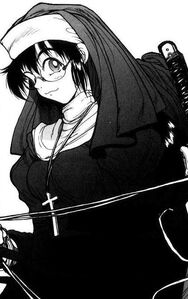 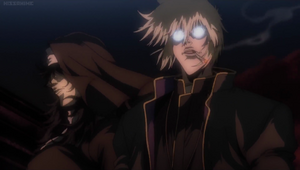 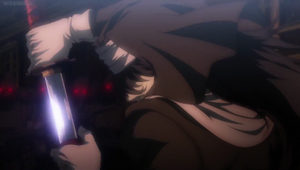 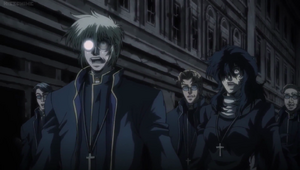 Heinkel and Yumie staring in Shock at Anderson's "Monster of God" Form. 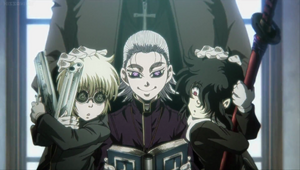 Yumie, Enrico and Heinkel seen as Children after credits roll in OVA VIII.
Add a photo to this gallery

Retrieved from "https://hero.fandom.com/wiki/Yumie_Takagi?oldid=1803236"
Community content is available under CC-BY-SA unless otherwise noted.