Heroes Wiki
Register
Don't have an account?
Sign In
Advertisement
in: Female, Final Fantasy Heroes, The Messiah,
and 50 more

To pass her pilgrimage.

In Final Fantasy X, Yuna becomes a summoner like her father before her, and embarks on a pilgrimage to expel Sin, a monstrous creature that terrorizes the world of Spira. She meets Tidus who teaches her there is more to life than sacrifice.

In Final Fantasy X, Yuna wears an ensemble similar to, but widely varied from, those worn by Yevonites: a purple pleated, flower-patterned dress; black boots; a black spaghetti-string camisole under a white sash that wraps around her neck and over her chest; and a yellow patterned obi with a chōchō musubi knot and a decorative obidome to clinch the cords. Two separate, kimono-like sleeves complete the outfit. The design of her staffis based on the Khakkhara, a staff used by practitioners of Buddhism.

In Final Fantasy X-2, Yuna wears an outfit given to her by Rikku to avoid being recognized. While retaining the same color scheme, Yuna's outfit is much skimpier. She wears a belly-bearing white sleeveless shirt with a cleavage window obstructed by the symbol for Tidus's waterfall team; topped with a pink hood. In place of her purple dress, she wears hot pants with a light blue frilled cloth in her left hip. She still retains her boots.

Yuna is a kind, loyal, honest, and polite humanitarian who strives to see the best in others and has a strong conviction to complete whatever task she feels is her duty. She is, however, naive, always believing the best of people, and often places the needs of others above her own, becoming apologetic when she feels she has let someone down. Like most summoners, Yuna is a devout follower of Yevon's teachings. She hides her feelings of fear and sadness while encouraging her friends to express themselves in her place. She is willing to carry others' burdens and sacrifice everything she has to destroy Sin, giving up chances for her own happiness if it means helping others. 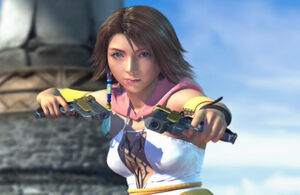