No information
Yuna (real name Yuuna Shigemura) is a major protagonist of Sword Art Online The Movie: Ordinal Scale. She was one of the many victims who died in SAO, but was later reborn and became a famous AI pop idol singer in the real world. She is also the daughter of Professor Tetsuhiro Shigemura and is the main love interest of Eiji.

She is voiced by Sayaka Kanda in the Japanese version, who also voiced Kaede Akamatsu in Danganronpa V3: Killing Harmony, and by Ryan Bartley in the English version, who also voiced Fluff in Miraculous Ladybug: Tales of Ladybug and Cat Noir, Gilda in The Promised Neverland, Ram in Re:Zero - Starting Life in Another World, Female Hakuno Kishinami in Fate/Extra, Rei Ayanami in Neon Genesis Evangelion, Candice and Korrina in Pokémon Masters and Takechiyo in Yashahime: Princess Half-Demon.

Yuuna had rather short hair, which she had dyed milk-tea-brown using a rare dye. When trying to stay inconspicuous in town in Sword Art Online, she wore a white hood with a plain, deep-red tunic. However, her main apparel was a vivid royal-blue one-piece dress with golden frills and buckle, indicating the rarity and high defence value of her cloth armour. Her outfit was supplemented with a pure white cape and lute, a pure white feathered hat on her head, and a dagger on her right waist, giving her the image of a troubadour.

Yuuna was an obedient, yet strong-willed girl. Despite her own desires, she did not openly oppose her father's wishes, such as sharing her interest in singing with him, yet continued developing her skills nonetheless. Yuna was also skilled at reading and improving the mood, such as easily noticing when Nautilus was depressed and helping him regain his good mood with candy and encouragement, or sensing when her party members were filled with doubt and restoring their resolution with one of her songs. According to Nautilus, her potential at encouraging others, give them hope, and lead them was on the same level or even higher than Asuna's. Additionally, Yuna had a strong resolution to help others, even at the cost of her life, such as when she went outside the safe zone to quickly raise her level in order to join the Clearers to assist in clearing the game, or when she instantly decided to sacrifice herself to save her party members from being annihilated.

Ever since childhood, Yuuna had been learning to play the piano and classical guitar. Yuuna herself preferred singing, especially pop or anime songs, but she lacked the resolve to speak with her father about this preference, as he was strict and only allowed her to play classical music.

Yuuna went to the same kindergarten, elementary school, and middle school as Nochizawa Eiji, but then moved to an all-girls high school. During her high school years, Yuuna accepted Eiji's invitation to play Sword Art Online with him, showing interest in the musical skills present in Sword Art Online. Although the two did not manage to get a copy of Sword Art Online from the stores, they were provided two copies of the game by Yuuna's father, who used his connections with Kayaba Akihiko to obtain them.

On November 6, 2022, the day the official service of the game began, Yuna and Eiji logged into the game, only to discover that Kayaba Akihiko had turned it into a death game. At first, Yuna listened to Eiji's request to remain in town, where it was safe, but at some point, she acquired the Dagger skill and ventured into the Outer Field to earn experience and money. Her resolve to help clearing the game was so strong that she had soon reached a level close to that of the Clearers at the time, a feat that required a lot of effort. 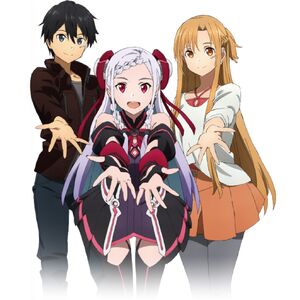 Retrieved from "https://hero.fandom.com/wiki/Yuna_(Sword_Art_Online_The_Movie:_Ordinal_Scale)?oldid=2221900"
Community content is available under CC-BY-SA unless otherwise noted.