Protecting and hanging out with Yukiteru

Yuno Gasai is the female protagonist/on-off heroine of the anime/manga series Future Diary. She is also the series' Yandere. She is a highly unstable 14-year-old girl and the Second diary owner.

Obsessed with Yukiteru Amano, Yuno comes off at first as a crazed stalker but is very devoted to Yuki. She possesses two personalities, one being sweet and devoted, and the other being crazed and psychopathic. She is the holder of the "Yukiteru Diary/The Diary of Future Love".

Yuno Gasai is a young girl with pink eyes and long pink hair styled in pigtails, two hanging as frontal locks featuring a pair of red bows, and the back pigtails left bare. Her most common attire consists of a blue shirt with a ribbon on her chest accompanied by a blue skirt with high socks, but her wardrobe changes occasionally throughout the series. When in "Psycho Mode"(what Yukiteru calls it), in the anime, her eyes will change from a normal state to where her pupils enlarge with rings on the inside.

Yuno's personality is an ambiguous one, for the most part she is a sweet, feminine and sometimes shy girl when around Yukiteru Amano. This masked her darker side that is of a ruthless, cold and calculating sociopath girl who has little if any problem in using others for her ends, that is her and Yukiteru's survival. She will resort to cruel and mostly violent methods that most of the time end in bloody deaths, of either the Diary Holder or any follower, effectively making her a Yandere at its extremes.

However, she was not always insane. Her brutal personality is a result of circumstances surrounding her life, mostly the abuse she endured by her adoptive mother and the absence of her adoptive father. This finally ended two years prior to the Survival Game, when she turned the tables on them and imprisoned them in a cage her mother would often keep her in, in an attempt to make them know what it felt. However, this only caused them to die of starvation, which traumatized her. This was the beginning of her changes, as she later became quite lonely and sorrowful, which is shown in her somewhat morbid habits of talking to her parents' dead bodies, telling them about her day, and claiming she will bring by Yukiteru. When Aru Akise moved their bodies, she became angry and said her parents were sleeping and that he woke them up. Later she even took their heads with her when she trapped Yukiteru in a hotel.

From the point onwards of when Yukiteru told her they would marry when they grew up, it was the pillar of support she needed, and her obsession for Yuki grew to escalating proportions. Willing to harm those whom she believes will take Yukiteru away from her, such as friends, etc. At one point she even goes so far as to kidnap Yukiteru and hold him hostage. Aru Akise stated that Yukiteru provided a stabilizing influence in her normally chaotic and violent life.

Her obsessive love goes to the point that she considered resorting to violence if Yuki's mother ever opposed her, which did not happen. Notably, she seems to show concern for his mother's well-being, as she showed genuine remorse for accidentally hitting her on the head with a hammer. She also threatened to kill Tsubaki Kasugano (though her suspicions of her ultimately proved to be correct), and immediately panicked that Yuki's friends Aru Akise, Hinata Hino, Mao Nonosaka and Ouji Kosaka would take Yuki away from her, forcing Yuki to calm her down and announce their "relationship".

Despite her insanity, Yuno has shown some reservedness to killing. This is shown when, after Yukiteru calls her his girlfriend, she instantly lets Hinata go when she intended to slit her throat. The fact that she did this rather than killing her anyway to ensure that there was no chance Yuki would fall for her suggests that she doesn't actually enjoy killing; she merely does it because she sees no other option. It is shown many times in the series just how deeply insecure Yuno truly is when she says her life wouldn't be worth living if she couldn't be the center of Yuki's world. Her crippling fear of losing him is notably the only thing that can cause her usually disturbing composure to crack.

In the third world, the third Yuno seemed to be very nice and calm, possibly because she still had love for her parents and there was no survival game for them to participate in. This allowed Yuno to stay mentally sane. However, as a side effect of receiving her 1st World self's memories, it is implied that she might still remember some of the things that occurred in the first world as she states that she feels as if something is missing.

Her diary is the Yukiteru Diary, which tells her everything about Yuki in intervals of 10 minutes. While this means that her diary is basically useless by itself, if combined with Yuki's Random Diary that predicts Yuki's surroundings, it can cover Yuno's weakness and protect Yuki, making the two a fearsome duo. Even while the diary does not help her much by itself, Yuno can more than enough make up for it with her great and cunning intelligence, which has saved both Yuki and herself in several times. She makes up most of the plans the duo uses to save themselves from the attack of the other participants, as well as quickly determining the weaknesses of her opponents, like The Twelfth's blindness, or discover that The Sixth's followers were pretending to be dead to ambush them. She is also skilled in traps, seen when she booby trapped an abandoned hotel with multiple tools (this is best seen in the anime), such as electronic locks, concrete (gas in the anime) and even a sickle from an elevator (also in the anime). Her supreme intelligence is her greatest asset.

Yuno is shown to be quite resourceful, using a shard of glass as a mirror to check the position of Minene Uryu during her bombing attack, as well as a pair of stones against The Twelfth to discover him amongst his copycats.

Her perhaps most fearsome ability along with her great intelligence is her near mastery of basically all types of weaponry, mostly bladed, such as knives and axes, and during the attacks against The Eighth and The Eleventh, to be a skilled swords-woman, and using firearms such as a pistol and a machine gun with lethal proficiency. It is believed that she carries around a S&W Special Forces M9 Bayonet as her personal knife. She also is fairly knowledgeable of poison and drugs although she uses them in few times. She has also demonstrated to be quite skilled in infiltration, as she has in more than one occasion enter a building unnoticed even while protected by the police. Additionally, she is quite skilled with firearms.

Also, despite her feminine appearance, Yuno has demonstrated impressive feats of physical strength mostly when angered, seen when she could free herself from two boys her age holding her in both arms, as well as free herself from two Omekata Cult members when The Sixth kissed Yuki and killed them two, even though she was severely weakened by the excessive amount of physical activity performed at that time. Also during the second attack against The Eleventh she was capable of vertically slicing up a person in half with a katana.

On top of all that, Yuno possesses godly powers from winning the first Diary Game. An example of such power is moving enormous structures through her will alone, such as when she tried to crush Yuki.

All in all, those who have ever faced and lived to tell the tale, have acknowledged her as a fearsome opponent and can be considered one of the most powerful participants. 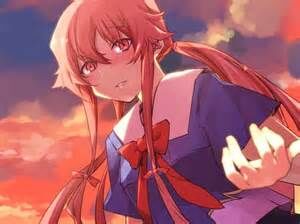 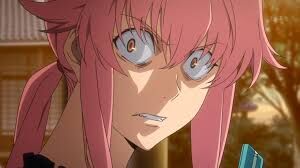 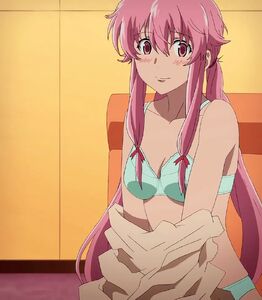 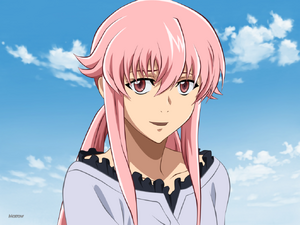 Yuno in a good mood 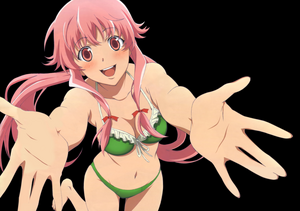 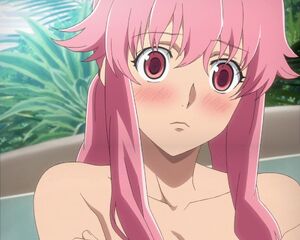 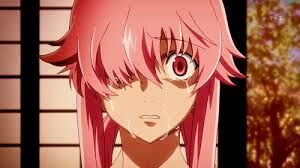 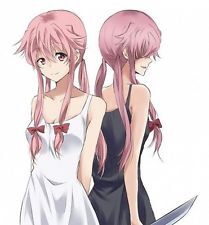 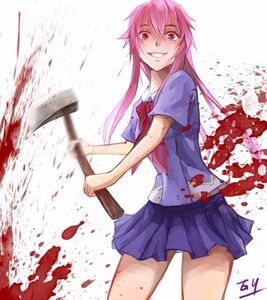 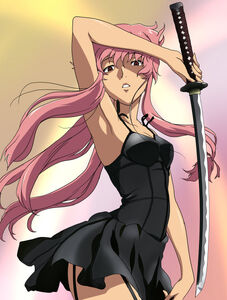 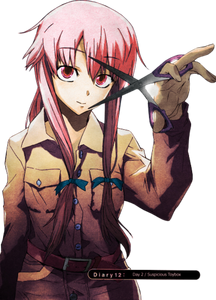 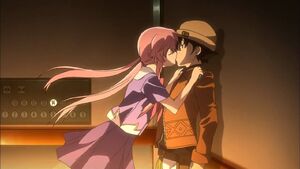 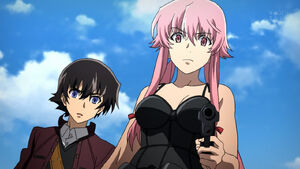 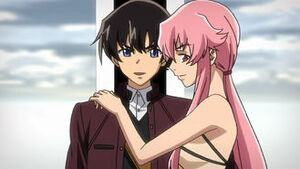