Give the painkillers to his boss.

Stop Vah Rudania's rampage.
Save Daruk from his fate (all succeeded).

Yunobo is the direct descendent of Daruk the Goron Champion and the assistant of Bludo. He first appears in The Legend of Zelda: Breath of the Wild, serving as a temporary sidekick to Link and helps to put an end to the corrupted Divine Beast Vah Rudania's constant interference with the mining work, with it creating volcanic eruptions. Despite driving away Vah Rudania with the help from his boss, Rudania kept on returning. He returns in Hyrule Warriors: Age of Calamity.

Yunobo is very shy and a bit of a coward, frequently shivering in fear in the presence of monsters and even mistook Link for a monster for a moment before realizing that it wasn't the case. In spite of this, he can be brave when necessary, and is very friendly towards Link and is willing to lend a helping hand in chasing down Vah Rudania. Being a grandchild to Daruk, Yunobo inherits Daruk's Protection which is often utilized when he is afraid or when being shot out of a cannon.

Yunobo spends much of his days, helping Bludo at the mines around Goron City and is often tasked with giving him painkillers for his back pain stemming from his old age. When he went to the Abandoned Northern Mines' small cave to pick up the medicine, a rock slide occurs which blocks the entrance, trapping Yunobo inside, leaving Bludo wondering what happened happened to him. Link is given the mission to find the young Goron, and he hears Yunobo's cries for help inside and Link adjusts the cannon's direction at the cave and opens fire on the blockade, setting Yunobo free. The Goron is terrified of Link at first before realizing that he isn't a monster.

He returns to Goron City to let Bludo know what happened. They resolved to go after Vah Rudania, but Bludo's back is still in pain, leaving him and Link to go on their own to deal with the Divine Beast. They knock down the bridge to where Death Mountain stood, but as they crossed, Vah Rudania sensed their presence and sends Guardian sentries to hinder their progress. Link and Yunobo devised a strategy where Link will whistle for Yunobo to signal for the Goron to either come to the Hylian or stop when the situation calls. If either Link or Yunobo are spotted, Yunobo cowers and uses Daruk's Protection to guard against the falling volcanic rocks that Rudania sends falling. Link and the young Goron work together to reach the cannons along the way to attack Rudania. After they appease the Divine Beast, Yunobo was about to insist on going in together, but Link boards it before he could finish.

After Fireblight Ganon is defeated, the now freed spirit of Daruk takes back control of Vah Rudania and aims for Hyrule Castle. During Daruk's monologue where he expresses concern what became of the Gorons since the Great Calamity, he spots his grandson below staring up at him giving the Champion relief that his people are still going strong. Yunobo laughs and cheers in sheer joy to see his grandfather and that the threat of the Goron's way of life has officially passed. When Link returns, Yunobo explains how he saw that Rudania had been calm recently and has seen Daruk's spirit as well. They visit Bludo who's back pain had finally eased and was ready to take on the Divine Beast, but is surprised to learn that they did it without him, as it seemed to the elderly Goron that his back pain eased too late to make him look like a liar who used his condition as an excuse to get out of helping out, but was happy to learn that the Gorons can finally live peacefully nonetheless.

Yunobo is summoned from 100 years in the future in Breath of the Wild to save Daruk from Fireblight Ganon thanks to Terrako, a small Guardian who time-traveled back into the past to avert Hyrule's destruction and decay in the Breath of the Wild timeline. Yunobo arrives just in time to block the fatal strike from Fireblight Ganon with his own version of Daruk's Protection, stunning Daruk before Yunobo assures him that he's here to help.

With Yunobo and Daruk working together, they are able to hold off Fireblight Ganon long enough for Link and Princess Zelda to arrive and help destroy the Shard of Calamity Ganon together. Joined by Mipha and the older Sidon who saved Mipha around the same time Yunobo saved Daruk, Daruk thanks Link and Yunobo for their help. When Sidon begins to explain how he showed up to save his sister, Daruk laughs it off, knowing they can work out the details of time travel later as they have more important things to deal with as he asks Zelda about what happened at Hyrule Castle.

Yunobo joins Daruk as they use Divine Beast Vah Rudania to tear through Calamity Ganon's forces to clear the way to Akkala Citadel and Fort Hateno to save the strongholds from Ganon's merciless assault, bearing witness to the Divine Beast's power against the corrupted Guardian Stalkers, and praising Daruk, although Daruk tells him to knock off the formalities, but Yunobo apologizes, saying he doesn't think he can do that, but Daruk laughs it off, reminding Yunobo that Hyrule needs them at the moment. After saving the Citadel and Fort Hateno, Daruk and Yunobo then assist in clearing Hyrule Field of enemies before Purah summons them to the final assault on Hyrule Castle with the other Divine Beasts and the unified coalition of Gorons, Gerudo, Zoras, Rito, and Sheikah in the reformed Master Kogha and the Yiga Clan. Working together, they punch through the best that Ganon throws at them before reaching the castle and being met by the dark seer Astor and Harbinger Ganon, the Terrako of that timeline corrupted by Malice that followed the future Terrako into the past. After defeating them, Calamity Ganon absorbs Astor to turn Harbinger Ganon into a complete, and perfected, body for itself, before corrupting the future Terrako so Link has to fight and severely damage it to purge it of the corruption, infurating Zelda to the point she vows to take down Ganon once and for all.

Upon reaching Calamity Ganon, he proves resilient to everyone's attacks, tanking them without even flinching. It is not until he tries to attack Link and Zelda that Zelda's holy power revives the crippled Terrako long enough for it to launch a suicide attack on Calamity Ganon, self-destructing with enough force to shatter Ganon's defenses, leaving him vulnerable. Once Link cleaves Ganon in half with the Master Sword, Zelda uses her holy power granted to her by the Triforce and Hylia to seal Ganon away once and for all.

With Ganon defeated, Hyrule wins the war against the Great Calamity, and with the remaining energy stored in it, the only remaining part of Terrako that Zelda recovered, an ancient screw, sends Yunobo and the other future Champions back to the Breath of the Wild timeline, their mission complete now that the Hyrule of an alternate timeline was safe from Calamity Ganon, the Champions were still alive, as was King Rhoam, and they could now look to a bright future together. However, as Yunobo and Daurk exchange a final goodbye, Yunobo promises to not forget the time he spent with Daruk, promising to cherish the memories as he's returned home to his timeline where Daruk had fallen in battle against Fireblight Ganon until Link freed his spirit 100 years later. 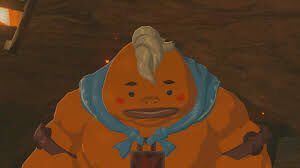 Yunobo in The Legend of Zelda: Breath of the Wild. 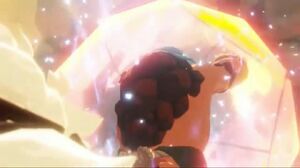 Retrieved from "https://hero.fandom.com/wiki/Yunobo?oldid=2230638"
Community content is available under CC-BY-SA unless otherwise noted.