Beating up people who piss him off.
Extended meditation.

Save the world.
Maintain his sanity.

Yuri Hyuga is the main protagonist and anti-hero of the video-games Shadow Hearts and Shadow Hearts: Covenant. Yuri starts out as a reluctant hero and soon evolves into a consummate Anti-Hero. He has the power to 'Fuse' with monsters he has defeated.

Yuri is the half-Russian half-Japanese son of Anne and Jinpachiro "Ben" Hyuga and was raised in main-land China. Ben was a Harmonixer, a being with the power to take over the corporeal envelope of monster he defeated and signed up into the Japanese military. Ben was often away from home and Yuri spent most of his time with Anne as a child. Ben would eventually die in the field unbeknownst to his family; Worse still Ben's enemy retaliated by sending demons to possess residents of Ben's hometown and had them eat the other villagers including their hosts' families, finishing off the village with the deaths of Ben's wife and son. When the monsters came for Yuri and Anne, Anne recognized what her so-called neighbors really were and did her best to protect Yuri but was killed. The turmoil of seeing his mother laying their lifeless triggered Yuri's Fusion abilities early. When Yuri came-to he couldn't remember what he did in his transformed state all he knew was that his house was covered with the torn up body parts of the monsters that killed his mother.

It is stated in Shadow Hearts Covenant that most Harmonixers develop their abilities in their late teens to early adulthood and usually only have the power to transform into one creature. Because of the traumatic events that lead to the triggering of Yuri's Fusion abilities he was able to Fuse since around ten years of age, further-more Yuri could fuse with multiple monsters instead of just one, This would lead to side-effects though regarding Yuri's spiritual balance compared to normal Harmonixers...

Yuri had heard the call of a voice in his head for years, he was never sure if it was a guardian spirit or his own intuition given life since he was a Harmonixer, but the voice randomly warned him of dangers, one day it called for him to catch a ride on the Trans-Siberian Express. Yuri reluctantly boarded waiting for whatever he was supposed to. Before long Yuri figured out what he was there to do upon noticing a prim and proper British passenger make his way to the head cabin. The British gentleman revealed himself as a warlock and summoned a demonic minion to kill the members of the Japanese envoy, making his way to a blonde girl the envoy was protecting. The warlock introduced himself as "Roger Bacon" to the girl once all the guards were dead but soon noticed the young man behind him. Bacon's minion immediately lunged at Yuri but was caught in Yuri's right-hand and crushed in his bare hand. Though the monster had severed Yuri's left hand before being caught Yuri just casually picked his severed arm off the floor of the train and back up to his bloody shoulder where-upon it almost instantly reattached revealing to Bacon that he was no mere man himself. Bacon seemed more annoyed at his minion's death than anything else saying he was fond of the creature. Bacon quickly used a sleep spell on the girl and picked her up preparing to leave, Yuri tried to free the girl and charged after Bacon, however the British warlock casually glanced over his shoulder at Yuri and sent him flying through the back of the cabin and several cars back. By the time

Yuri made his way back to the main car he saw Bacon had taken the girl to the roof of the cabin. Yuri burst through the cabin and confronted Bacon there. Bacon put down the still unconscious girl and fought Yuri, though Yuri revealed his demonic form it did little to stop Bacon and with a few gestures Bacon used a spell that put Yuri at death's door. As Yuri keeled trying to regain his strength Bacon was about to deliver the final blow but then something happened, a holy light radiated from the girls unconscious form reacting to the monsters in Yuri's body, the light caught Bacon off-guard and Yuri took the opportunity to punch a whole in Bacon's face. As Bacon collected himself from the pain Yuri quickly grabbed the girl and jumped off the train. Watching the diabolical man heal his wound as easily as Yuri had he waited in the moonlight with the girl in hand as the train quickly put distance between the two of them and the warlock.

After rescuing her the girl in danger runs off frightened by her rude hero. Yuri hears the voice in his head again, garbled and but encouraging him to stay with her. Yuri quickly catches up with her though. After collecting themselves Yuri realizes the girl was still in danger and the girl realizes the brash young men was trying to protect her and the two decide it best to travel together until they can both get to safety. The girl in danger introduces herself as Alice Elliot, and says she didn't know why the Japanese wanted her but she was letting them take her through China and over to Japan just to get away from the warlock Roger Bacon, who killed her father to try to get to her. The two journey across main-land China and later Europe and have many adventures dealing with ghosts, demons, warlocks, sages, mad-alchemists, corrupt military officers and their own personal demons.

Yuri is a typical anti-hero to counter Roger Bacon's role as anti-villain. He is a short-tempered, perverted, pugilistic lay-about, virtually all his vices are second nature to him. Since Yuri's power comes from his soul he actively tries to better himself in order to promote spiritual balance to keep from becoming overwhelmed by the Malice in his heart and becoming possessed by the very creatures he devours. Yuri has several unresolved issues with his father's frequent abandonment of him and his mother's death and links the two, thinking his mother wold have been alive if not for the enemies his father was out making and that his father was not there when they needed him most.

Yuri regularly makes fun of the more arrogant villains he faces and heckles them roundly if they are overblown or cliche'. He often criticizes his fellow team-mates if they sound like know-it-alls or self-righteous. He gets into a particularly vitriolic friendship with Zhuzhen and the two argue constantly, though almost always in good humors. Where as the first game, Shadow Hearts, makes Yuri's main character-arc focus on coming to grips with opening himself up to others the sequel, Shadow Hearts: Covenant has Yuri coming to grips with his own emotions and his ability to go on with them alone.

Yuri has the power absorb the souls of creatures he kills, the more souls he has of a certain element the closer he gets to merging them into one big demonic embodiment of that element and once the elemental creature is coalesced Yuri can fight the creature in his heart; If he wins against the demonic embodiment he can transform his body into that of the subjugated monster; this is the Fusion process that the player must embark upon in order to get stronger powers for Yuri over the course of the game. The Fusion process has a side-effect though that he should tend to with frequent maintenance. The oldest of Malice in Yuri's heart has manifested as Four Masks. Every few battles the cursed pendent Yuri carries changes color going from deep blue, to green, to yellow, to red and alerting him to the build-up of Malice in his heart. When the pendant turns a deep blood red it means his Malice is at it's peek and the Four Masks can summon manifestations into the world to devour Yuri's soul and hijack his body, the manifestations summoned are always extremely tough for Yuri, even at later levels they are never pushovers, but even if defeated the manifestations will just reappear maybe in a few minutes, maybe in a few seconds and Yuri must re-fight them or be destroyed. To prevent the manifestations of Malice Yuri/the player is strongly encouraged, though not forced, to go into his heart before the pendant changes colors even once and fight the weaker manifestations of Malice in his heart before future battles have a chance to make it grow and eventually manifest in the real world. If Yuri fights Malice in his heart before his pendant changes colors this simply amounts to Yuri having to fight one extra low-level monster every five battles or so to keep his powers in check.

Aside from his Fusion powers Yuri relies whole-heartedly on his fighting skills and uses a mixed-martial-arts kick-boxing style of fighting. He is considerably strong compared to normal humans though not super-humanly so unless he transforms. Yuri has the most Sanity Points, in the game which amount to him being able to go the longest in a single battle without collecting himself. The Sanity Points represent each character's ability to process the supernatural monsters they encounter and deal with the pressures of battle and blood-shed. As a Harmonixer it is no surprise he has the most Sanity Points but every time he uses a Fusion it uses up a decent chunk of his Sanity Points, if Yuri, or any player character, reaches zero Sanity Points, they temporarily go Berserk, going out of the player's control and attacking enemies and allies randomly until the battle is over. The only character to rival Yuri's considerable Sanity Points is Keith Valentine, a vampire. Yuri also has one of the highest Health Point totals in the game, allowing him to take the brunt of combat, this becomes extremely helpful when Yuri gets Fusions that can heal others since he can not only stay in combat but keep others healthy as long as he is up, essentially becoming the multi-purpose tank character. 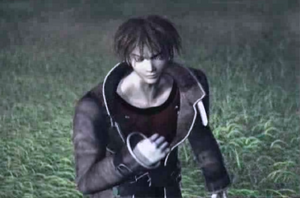 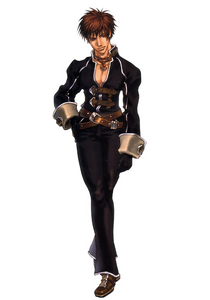