Former Knight of the Niren Corps

Hanging out with Repede, Estelle, Flynn and friends.

Protect his friends.
Defeat Alexei and Duke.
Save the world from the Adephagos.

Yuri Lowell is the main protagonist of Tales of Vesperia, the tenth major release in the Tales series. A young man from the Imperial Capital, Zaphias, Yuri is forced to leave his life in the lower quarter behind to pursue the thief who stole the blastia core required for regulating the area's water supply.

Yuri's pursuit of the thief eventually leads to him being imprisoned in the castle dungeons. After making his escape, he continues his journey with Estelle and his faithful dog Repede for the sake of the common people. His journeys have him crossing paths with many new people, places and thrilling adventures, eventually escalating into a quest to save the planet. A major part of his time in the imperial knights is with the Niren Corps, often arguing with Flynn Scifo, Hisca Aiheap, and his captain Niren Fedrock—though he admires Niren's ideals. His personality during the movie is much more impulsive; often doing things on his own, holding his ideals in the highest regard. After returning from a mission to destroy a large pack of monsters from attacking a town due to the increase of aer, Yuri starts a bar fight with a local guild and manages gains the respect of the guild leader. After Niren and Chastel go to investigate the aer and Flynn goes to request reinforcements in his captain's place, Yuri and Hisca help to quell another monster attack. During the attack, Niren's dog Lambert is taken control of by a monster comprised of pure aer forcing Yuri to kill him. Disheartened, Yuri decides to take care of Repede, Lambert's son, and clashes with Flynn who failed to acquire reinforcements. Niren decides that he must take matters into his own hands as Yuri, Flynn and the rest of the Niren Corps go to investigate a fortress which is the center of all of the aer. Yuri, more than ever, tries to save everyone but after successfully stopping the device causing the overflow of aer, the fortress collapses and Yuri fails to save Niren who was caught in a sinking sinkhole. Flynn informs him that Garista Luodur was probably involved in the device as they confront him. When he reveals his plans, he attacks Yuri and Flynn. Yuri, using the blastia that Niren gave to him before he died, catches Garista off guard and kills him. In the aftermath of this, Yuri, who is seen in his familiar black clothes from the game, leaves the knights with Repede, who now has Niren's pipe. The experiences Yuri had in the movie carries on with him throughout the game.
Yuri grew up in the Lower Quarter of Zaphias with Flynn, and according to many of the residents there (such as Ted), they were the best of friends and shared everything, even the first sword that they bought together. Growing up as a commoner caused Yuri to develop a dislike for the empire's nobility, and so throughout his adventure, Yuri tends to take the commoner's side in disputes.
He is not afraid to take difficult matters into his own hands, and throughout his travels comes to decide that taking the law into his own hands is the only way to ensure that the villains of the world are punished. However, as shown by his conversation with Flynn in Mantaic, he is fully aware that in doing so he may be bringing himself closer to those whom he despises.
Yuri is capable of using both swords and axes in battle, though axes usually slow him down.
Yuri and Flynn joined the imperial knights together, but Yuri left—after "a few months", by his own account—because he could not stand their corruption. His short time as a knight allowed him to travel outside of the capital, but he was unable to do so as regularly as Flynn.

Yuri comes across as sarcastic and cynical, possibly due to the way the nobility treated the people of the Lower Quarter. He seems to enjoy teasing others, especially Karol and Rita Mordio, although he does develop a strong bond of friendship with the former, becoming something of an older brother figure. Unlike many main characters in the Tales series, Yuri has a more fully-formed personality due to his matured age. He is an emphatic young man who prefers to solve smaller problems from individuals rather than the larger, more political ones. Yuri grew up in the Lower Quarter of Zaphias with Flynn. According to many of the residents there, Yuri and Flynn were the best of friends who shared everything, such as the first sword that they bought together. Growing up as a commoner caused Yuri to develop a dislike for the empire's nobility, due to their haughty nature towards anyone less fortunate and their tendency to turn a blind eye to suffering. Thus, throughout his adventure Yuri takes the side of normal, average people over nobility.

What sets Yuri apart from many other protagonists in different games, particularly those in the Tales series, is the fact that as the second-oldest member of the party, he already has some awareness and knowledge of the world around him. While most other protagonists grow up and develop their ideals as they continue through their adventures, Yuri is quite comfortable with the person he is, already having an established mindset and personality that changes and develops very little over the course of the story. This manifests mostly as mocking quips directed at Boccos and Adecor during tutorials, but is also apparent during discussions about the nobles and their treatment of the lower classes. This also makes Yuri less prone to depression and hesitation. He is not afraid to take difficult matters into his own hands, and throughout his travels comes to decide that taking the law into his own hands is the only way to ensure that the villains of the world are punished. However, as shown by his conversation with Flynn in Mantaic, he is fully aware, and to some extent even worried, that in doing so he risks becoming a person that, in a sense, is just as bad as those whom he despises.

Yuri is capable of using both swords and axes in battle, though axes usually reduce his attack speed while providing more damage. He uses his fists and feet in combination with his weapons, often punching the enemy with his gauntlets instead of using his main weapon. His attacks and artes range from stylish and flashy to brutal and powerful. When compared to other swordsman in the game, Yuri does not have as much technicality and he tends to do more tricks with his sword such as flipping it around him and spinning it during attacks. He has a good balance of speed and power in his attacks, with artes like Tiger Blade or Shining Fang reflecting his speed, whilst artes like Raging Blast and Wailing Havoc reflecting his power. His Fell Arm is "Blazor Edge Abyssion", and the sword he is seen with in official art is "Second Star", the sword received after the battle with Estelle.

Repede - Yuri adopted Repede after his previous owner, Niren Fedrock, was killed before the events of the game. In the movie, Yuri considers him annoying, although Repede still shows affection toward him. However, after Repede's father, Lambert, is controlled by the monsters, Yuri has no choice but to kill him. This event causes him to decide that he would take care of Repede. Yuri and Repede share a deep bond of loyalty and friendship. In a skit, Yuri says that "Repede is Repede", as he does not consider him an ordinary dog.

Judith - Yuri and Judith began working together even while Judith was viewed as the party's enemy. Because they are relatively close in age, they are fond of flirting with each other, though due to their similar personalities it comes off more like friendly banter. The two of them are lone wolves, both holding secrets from the rest of the guild, which eventually do come to light. Their character development throughout the games is therefore similar, as they have both gone through life's hardships alone and now learn to put more faith in their friends. Both of them love to tease the other party members, though they rarely manage to tease each other as they catch on to the other's witty remarks really quickly. Yuri is also one of the more concerned party members when Judith decides to split from the group to hunt blastia.

Flynn Scifo - Flynn, having grown up together with Yuri in the lower quarter's of Zaphias, is Yuri's oldest and best friend. Both of them aspired to become knights in order for the chance to help others, but while Flynn stuck with it, Yuri dropped out. Flynn has a starkly different attitude and personality compared to Yuri; Where Flynn is methodical and polite, Yuri is impulsive and arrogant. While Flynn is more willing to stick to regulations in hopes that he will eventually gain enough influence to change things, Yuri is impatient and is not afraid to resort to, and will do, whatever he wants in order see an injustice rectified. Because of these differences, they tend to frustrate each other, but despite this the two of them remain good friends. Yuri has stated that Flynn had a knack for swordplay when they were children and had always been the noble one.

Yuri makes an appearance in Project X Zone. He is a playable character who is partnered up with Estelle.

A young man who lives in the lower quarter of the Imperial Capital, Zaphias, and a member of the guild "Brave Vesperia." Formerly a member of the Imperial Knights, he left them after becoming disillusioned with the corruption within the Empire. After that, a chance encounter with Estelle led to a journey across the world, during which he was confronted with the revival of the potentially world-ending Adephagos, but with the aid of his companions he brought an end to that threat. Although often cynical, he has a strong sense of justice and possesses an earnest desire to aid the weak and the powerless. 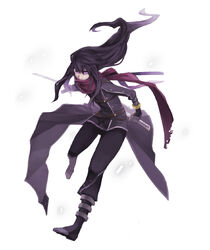 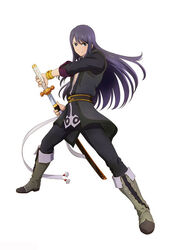 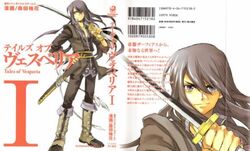 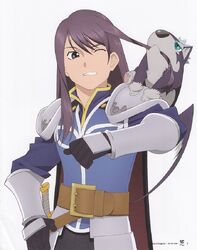 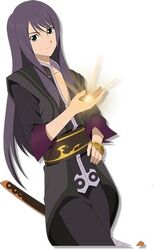 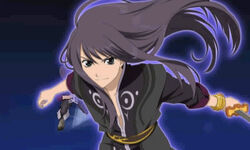 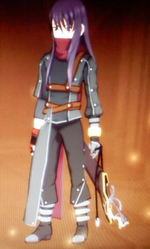 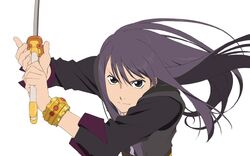 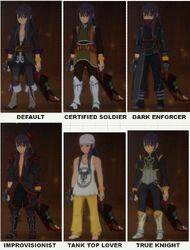 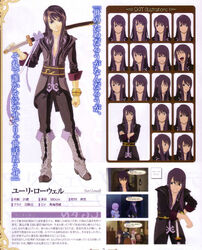 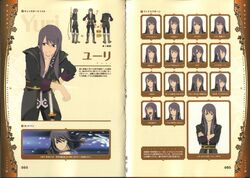 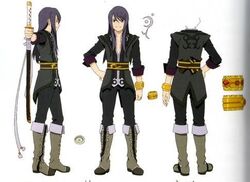 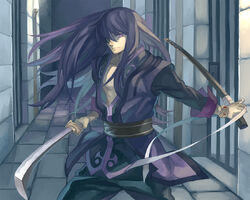 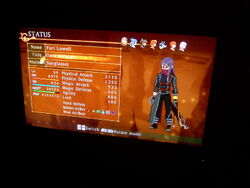 Retrieved from "https://hero.fandom.com/wiki/Yuri_Lowell?oldid=1910504"
Community content is available under CC-BY-SA unless otherwise noted.