Heroes Wiki
Register
Don't have an account?
Sign In
Advertisement
in: The King of Fighters Heroes, Female, Honorable,
and 55 more

Be with her friends

Fight greater evil
Do good for her life

Yuri Sakazaki is one of the main protagonists along with her brother Ryo, in the Art of Fighting series.

She later started to make regular appearances in The King of Fighters series.

She is voiced in games by Harumi Ikoma in Art of Fighting, Kaori Horie between Art of Fighting 2 and The King of Fighters XIII, Ai Kakuma for the rest of her appearances, who voices Auriana for the LoliRock Japanese dub, and Amy Walls in the English versions of the Maximum Impact series. In the animated series, she was voiced by Sakura Tange in Dengenki Bunko drama CD, and in the Art of Fighting anime, she was voiced by Ayumi Hamasaki in the Japanese version of the anime, and by Veronica Taylor in the English version of the anime.

As a child, Takuma dedicated more time training Ryo to be next family heir rather than raising Yuri. When she was six years old, her mother died in a tragic car accident. Sensing his family was being targeted, their father leaves in order to protect them. With the loss of both parents, she becomes fearful and heavily dependent on Ryo for the rest of their childhood. When she first meets Robert, she does not trust him but eventually warms up to him.

When she was 17, Yuri was kidnapped by Mr. Big on behalf of Geese Howard as part of a ploy to blackmail her father. Ryo and Robert search Southtown to find her whereabouts and rescue her. While held hostage, she finds out the identity of Mr. Karate. When Ryo defeats her captors, she reveals it to her brother and the family is reunited.

In order to protect herself in the future, Takuma teaches her how to fight much to Ryo and Robert's chagrin. He trained Yuri in secret, but only taught her enough to defend herself.

She becomes worried about Robert when he doesn't appear for their date before Art of Fighting 3. Setting out with her brother, they search for him in Glasshill. During their trip, she is wounded by Sinclair and briefly hospitalized. If a player plays through Robert's story, a strained Yuri appears to assist his plight against Wyler. She is healthy enough to leave with Robert by the end of the game's events.

According to Ryo, she and Robert are still single by the time Buriki One takes place. She likely stayed at home to help the family business, as she is close enough to her brother to tell him to shave off the hair from his chin.

Yuri, now confident in her fighting prowess, decides to enter the tournament, but is denied to enter by her brother. She defies his wishes and enters with King and Mai. It isn't until the 1996 tournament that they finally form a team together to represent the prestige of Kyokugenryu to the world. She is forced to join when Takuma gives her an ultimatum to either enter with Ryo or leave the house.

After the 1999 King of Fighters tournament, Yuri wanted to once again show her independence. She begs King to take her place for the year and joins the Women's Team. In 2001, Robert reveals to the family that his family business is in trouble. They decide to all enter together to win the prize money and help out Robert's situation. Since 2001, Yuri then has been a regular for the Art of Fighting team alongside Ryo and Robert. In The King of Fighters XI, Yuri has a rival in the form of Malin. She stuns her father with her whimsical haircut before KOF XIII and is upset by her family's eccentric reactions. Since the rising skill of martial artists in the tournaments outclasses her basic training, Robert informs her of her brother and father's wishes to quit Karate for her own safety. Optimistic in her attempts to improve herself, however, she teams with Mai and King for the newest tournament.

In KOF XIV, she joins the tournament as part of the Art of Fighting team to retake her father's place for her own reasons.

Yuri is a Japanese teenager/young girl with an athletic build. She has brown eyes and brown hair that is usually braided. Her usual attire consists of a sleeveless gi top and spandex leggings, fingerless gloves, a red bandana and sneakers.

Yuri Sakazaki is a friendly young girl who always cares about her family and friends. She is a strong believer of innovation and trends, constantly finding ways to improve herself through change. She is often arguing with her father and Ryo over matters regarding her newfound sense of independence.

In the Art of Fighting series, it is implied that she has a romantic interest in Robert after her kidnapping. In Art of Fighting 3, she is confirmed to be in a relationship with Robert. Thought still present to a certain degree, this attraction and relationship is downplayed in The King of Fighters series. 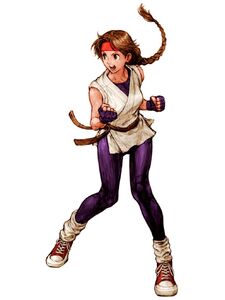 Yuri in Capcom vs SNK. 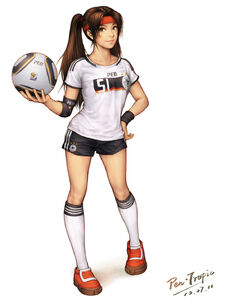 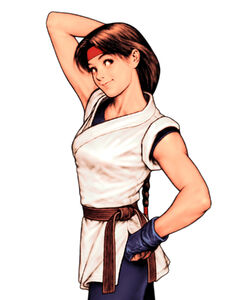 Yuri in Capcom vs SNK 2. 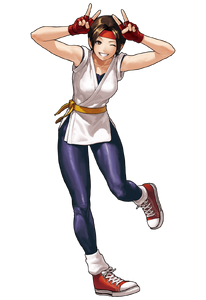 Yuri in The King of Fighters XIII.

Yuri in The King of Fighters XIV. 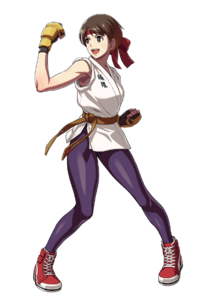