Yuri was born in Astoria, New York City. Her father, a second generation cop, was imprisoned for taking bribes from the Maggia. Her father's fall from grace pushed her to join the police force, with the goal of taking down the Maggia. Yuri started out as a detective in the Chinatown branch of the NYPD, but changed precincts several times during her time in the police force. Over the course of over a decade, Yuri brought down countless Maggia fronts, earning her the ire of Hammerhead and eventually earning her the rank of captain. Over time, she formed an alliance with the masked vigilante Spider-Man. She was one of the few authorities to really trust him, giving him her contact and often providing him with intel on crime in the city.

Yuri serves as the main point of contact for Spider-Man within the police department. She works with him throughout the main missions, often pointing him in the next direction or opening up smaller tasks within districts.

When Yuri is first introduced, it is to ask Spider-Man for assistance in taking down Kingpin as the police move in to Fisk Tower. In the beginning of the mission Keeping the Peace, Spider-Man stops by to chat with Yuri. Later, she appears in the mission A Shocking Comeback when Shocker is taken to prison and she unexpectedly teases Spider-Man. At the funeral for Jefferson Davis, Yuri attends, standing with the rest of the cops. When Sable International mercenaries capture Spider-Man during the Dual Purpose mission, she arrives just in time to vouch for him. Later, after Ryker's Prison and The Raft are attacked, she is nearly killed when her helicopter goes down. Spider-Man is there to save her, catching the helicopter in a giant web. Likewise, Yuri saves Spider-Man when the latter is found wounded in the waters by the Raft.

Yuri is understandably upset when the heavily injured vigilante leaves hospice. However, with the city quickly spiraling out of control, she accepts his help in containing the prison escapees.

Later, she calls one last time before the final mission that she is infected and returning home.

Yuri returns by the time the main story is complete, telling Spider-Man that the city still needs to be cleaned up, and for the job they need "Spider-Cop". The City That Never Sleeps: Turf Wars In an effort to stop the brewing Maggia gang war, Yuri and her team break into Hammerhead's base with Spider-Man's help. Despite her efforts, the team is overwhelmed by Hammerhead, leaving most of them dead. Yuri is forced to call the families of the fallen officers to inform them of their fate and enraged, she barges in a Maggia bar and proceeds to brutally beat everyone there. She appears during Spider-Man's fight with Hammerhead and shoots the mob boss in the head, though he is artificially resurrected by one of his men while his bodybag is being transported to a morgue. The City That Never Sleeps: Silver Lining Yuri is placed on administrative leave in the aftermath of the Hammerhead incident. However, she has not given up her agenda against him or the Maggia. As the story progresses, Spider-Man discovers a series of crime recordings and police records at the sites of various murders across the city. The recordings document how the murders have been committed by a Maggia enforcer who is under orders from Hammerhead to gain information on Yuri's current plans and state of mind. To that end, the enforcer blackmails Yuri's therapist after coming to see him under the guise of being a patient himself. It is revealed that the therapist is actually working undercover in concert with Yuri to apprehend and convict the enforcer for attempted murder.

When Spider-Man finds the last recording, he learns that the enforcer has discovered the therapist's true motives and murdered him in cold blood. Shortly after, he receives a call from Yuri, who asks him to meet her at Madison and 23rd. When he arrives, he finds the enforcer dead, his body tied to a water pipe. Yuri calls again and tells Spider-Man that while she still believes in the justice system, there are times when it simply doesn't work, something she considers unacceptable. She also declares that killing the enforcer felt good and that she feels that she has dispensed true justice, restoring some sense of balance to the world. Spider-Man implores her to turn herself in, saying that he is still her friend and that he doesn't want to come after her. Yuri refuses and tells him to do what he has to do and that she will do the same. She tells him goodbye and hangs up, leaving him despondent.

Yuri is a no-nonsense individual with a strong moral code and low sense of humor. At the start of the game, she seems to regard her relationship with Spider-Man as little more than partners, but as the story progresses, she shows more than once that she does care for his well-being, such as taking him to the hospital when he is injured.

During the Maggia gang war instigated by Hammerhead, Yuri is pushed to her limits by the infamous gangster. After Hammerhead attacks the NYPD precinct, Yuri loses control, giving into a rage-fueled brutality and throwing aside her partnership with Spider-Man, while also turning into a ruthless vigilante upon her suspension from being a police officer. As the story progresses, Mary Jane Watson discovers not only has Yuri been disciplined several times for police misconduct, her father was a corrupt police officer who was convicted of taking bribes from Hammerhead and the Maggia. 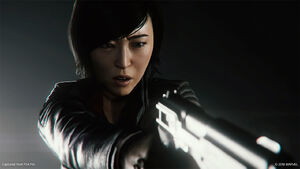 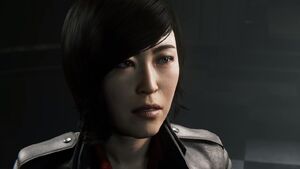 Retrieved from "https://hero.fandom.com/wiki/Yuriko_Watanabe_(Marvel%E2%80%99s_Spider-Man)?oldid=1764196"
Community content is available under CC-BY-SA unless otherwise noted.